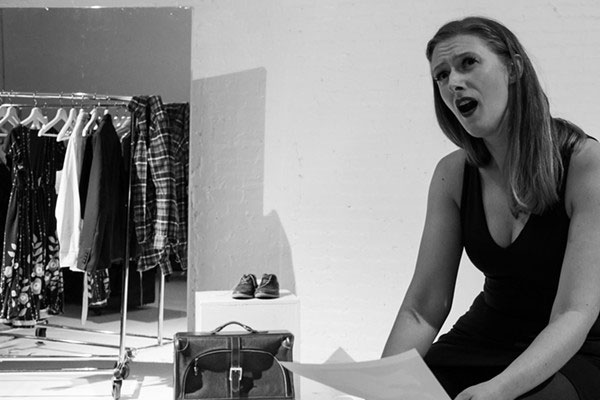 Liz Bouk stars as Hannah After in the Texas premiere of "As One." (Courtesy photo)

Since its New York premiere in 2014, Laura Kaminsky’s chamber opera As One has earned significant buzz while challenging the often-overstuffed confines of opera itself. Counted by Opera America as “the most produced new opera in North America” and dubbed by the Los Angeles Times as “the every(wo)man transgender opera,” it employs a minimalist cast of two singers to embody a sole protagonist on a poignant path of self discovery.

Essentially the coming-of-age story of a transgender woman named Hannah, with a baritone portraying Hannah pre-transition and a mezzo-soprano post-transition, As One plays out against a backdrop of video projections while a string quartet pushes the narrative through 15 diverse songs.

As the presenter of As One’s Texas premiere, starring Liz Bouk and Jose Rubio with musical accompaniment by Camarata San Antonio, Alamo City Opera has assembled “a committee of persons representing members from the gay, opera and transgender communities” for a Transgender Awareness Public Forum in advance of this weekend’s performances, which are set for January 19 and 20 at UTSA’s Buena Vista Theater.

Moderated by Rivard Report publisher-editor Robert Rivard, the discussion brings together the voices of local dramatist Greg Hinojosa, vocalist Ken Slavin of the San Antonio AIDS Foundation, Alamo City Opera founder Mark Richter, Pride Center Board Chair Robert Salcido, and transgender activists and leaders Eric Macias, Ashley Smith and Ruby Corado, among others. In addition, As One creator=composer Laura Kaminsky will be on hand to shed light on “the power of opera in bringing contemporary themes to the forefront of a city’s culture fiber.”

Transgender Awareness Forum, Tuesday, January 15 from 6 to 7:30 p.m. at the Central Library, 699 Soledad St. Free and open to the public.

The leaders of PFLAG San Antonio and Fiesta Youth are extending an invitation to other LGBTQ groups to join a...