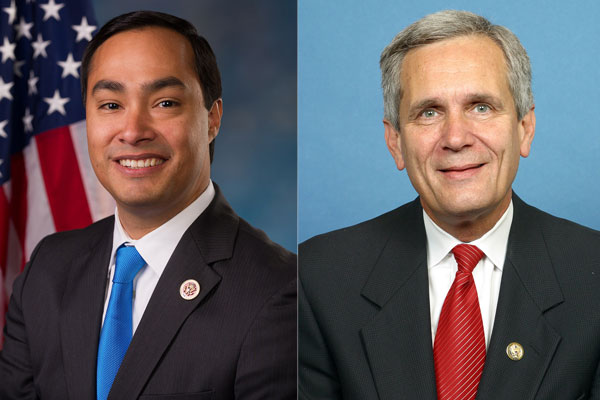 With the November election just around the corner, the Human Rights Campaign has released it’s Congressional Scorecard for the 115th Congress that measures support for LGBTQ equality in Congress. Locally, two San Antonio Congressmen scored 100 on the survey.

Congressman Joaquín Castro of District 20 and Congressman Lloyd Doggett of District 35 scored 100 on HRC’s survey which took into consideration votes on LGBTQ-specific legislation as well as other measures, like immigration and healthcare, which affect LGBTQ people and their families.

The scores for San Antonio’s other Congressmen are:

“While Donald Trump and Mike Pence have spent the past two years unleashing relentless attacks on the LGBTQ community, the 115th Congress has done little to hold them accountable or pass LGBTQ equality, while doing a great deal to undermine the rights of the most vulnerable members of our community,” said HRC President Chad Griffin. “The HRC Congressional Scorecard serves as an important tool to understand where Members of Congress stand on LGBTQ equality. ”

The average score for Senators is 48.7 with Democratic Senators scoring an average 94.8 and Republicans scoring 2.5.

According to HRC, there are an estimated 10 million LGBT voters across the U.S who, together with their allies form a bloc of 52 million people dubbed “Equality Voters.” The Congressional Scorecard offers these voters a guide to how their elected officials in Congress have supported the issues that matter to them.

“As we face one of the most important elections of our lifetime,” Griffin said. “HRC’s Congressional Scorecard makes clear that it is crucial for fair-minded voters turn out in force to elect a pro-equality majority to Congress.”

By Julián Aguilar, The Texas Tribune State Rep. Mary González said Wednesday that a Republican colleague who publicly mocked her...