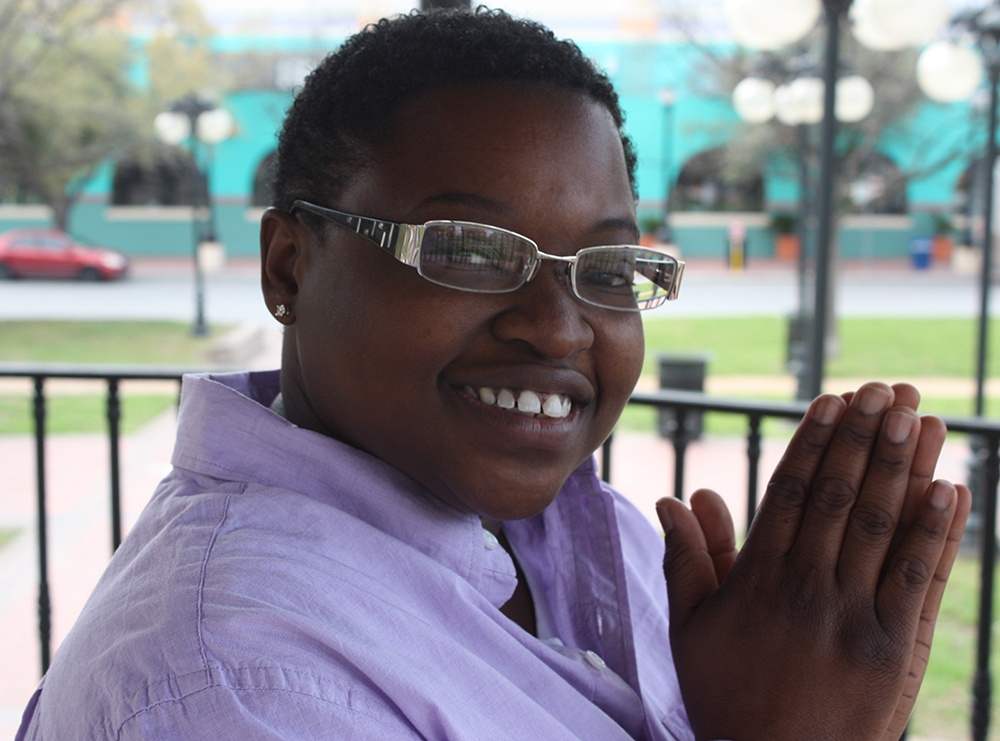 Poet and author Erika Land. Photo by B. Kay Richter.

“I had to shut off my emotions. The only emotion was anger.”

Erika Land’s memories of her deployment at a military hospital in Iraq include a military pilot’s brain fragments spilling out over her hands. She began obsessively washing them. She’s since recovered from that compulsion, but other symptoms of her PTSD are not as easy to shake.

The words are disturbing and intense to hear. They reflect the pain and part of the anger that veterans know all too well. In a PTSD episode that she recorded, Land spells it out: “My job was to play God and take another man’s life to save so many others,” she says in the tape. “And while that might seem like an honorable thing to do, it’s not, because of what you are telling that man.”

Land was born in 1983 in Norfolk, Virginia. After graduating high school, she enlisted in the army and became a pharmacy technician. Most of her service was spent in the United States, but between October 2005 and November 2006, she spent a year in a military hospital in Mosul, Iraq.

It changed her life and her perspective. “I had to shut off my emotions,” she said. “The only emotion was anger.”

In February 2009, Land left the military and moved to Athens, Georgia, to pursue a degree at the University of Georgia. Her initial plan to was to attend pharmacy school, but she eventually discovered her passion for writing, which led her to become a motivational speaker about the effects of PTSD. She describes herself as a 21st-century war poet.

Land notes that substance abuse is a common problem for individuals suffering from PTSD, and that productive activities can replace those negative highs. “It just sucks, and now I see that my longest term of sobriety was between when I was 16 up to when I was 22,” Land recalled.

Veteran and poet Erika Land reads at the 2015 International Women’s Day march and rally. Photo by B. Kay Richter.

Land has published three books. Residual Affects is a collaboration with photographer KaTisha Smittick, who served with Land at the same military hospital. Smittick uses photography as her method of healing from her own PTSD. Land’s latest work, Georgia’s DAM, takes the reader through some of her most intense struggles with PTSD. This excerpt from her poem, “War Song,” documents her reaction to hearing a country song:

When I turn on the radio and hear a war song, thanking me and my fellow warriors for a job well done, as innocent as it may be,

I am filled with tears, not tears of joy, but of pain,

Excruciating pain that punches me in the chest.

Pain that stems from those horrific thoughts I have when a thank you war song reminds me of all the friends I have lost.

While Land has documented her PTSD and the aftermath of war, she has also explored fiction. It’s Complicated is a series that details the pitfalls and triumphs of lesbian relationships. “It shows how we see things from other people,” Land said. “Everything we do is from other people.”

Land and Smittick have launched a nationwide campaign to speak about the healing effects of art therapy. The mission of the tour is to expose veterans to different art outlets within their respective communities. In that pursuit, Land defines “art” broadly. “We believe that art comes in many forms, just like people do,” she said. “So, if someone is into building cars, we want to connect them with mechanic shops that are willing to let a veteran work on cars for a hobby.”

Boylesque legend Tigger! is stripping to change the world

“It makes sense that you want to hear from all genders. There are more than two.” Tigger!, the 50-year-old burlesque...