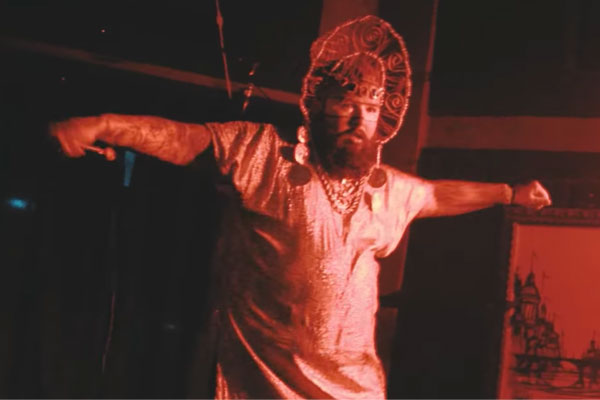 If video killed the radio star, Chris Conde might be a martyr. Conde, a local queer experimental rapper, just dropped another video, “Growing Up Gay,” shot live at one of his recent his Hi-Tones shows, his fourth video to date (“not necessarily a single,” he tells us). “I just felt like with everything happening in the world, I needed to put it out to give some perspective on what it’s like to be gay in a straight world,” he told the Current.

In the video’s setup, Conde walks among the crowd like royalty and announces, “Hey y’all, I’m about to rap inside if y’all wanna hang out, get some drinks, get weird with me, that’d be great.” And get weird he does. Adorned in long gold, dangling earrings, a shiny gown, and a large crown, Conde’s tattoos and pride are showing.

That pride took a while, though. The video’s lyrics talk about Conde’s struggle growing up gay, touching on suicide and anxiety and the hurt that goes along with the struggle. He underscores how the current political dialogue around LGBTQ acceptance is in a strange, uncomfortable place; that while it seems gay rights have become even more widely embraced, events like Orlando have some wondering whether much has really changed at all. Or, as Conde raps, “Why do I feel like god hates me if it’s all good?”

Conde’s performance doesn’t take any of his usual extravagant turns, which, he tells us, was intentional. He wants the video to raise awareness. “Yeah I’m taking no shit,” Conde proclaims on stage. “We are equal to humanity. We are never less than.”

The Stonewall Democrats of San Antonio have announced this year's list award recipients for their annual banquet on Saturday, September...