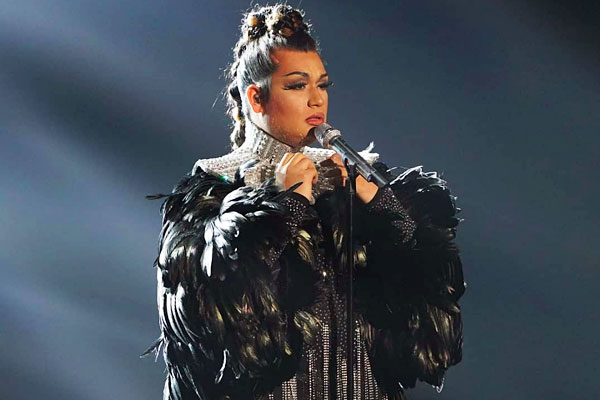 Y’all. Our girl might win this whole damn thing.

If you haven’t been keeping up with the current season of American Idol, you’re really missing out. Not only is the talent on this show actual talent this season, San Antonio’s singing drag queen Ada Vox is competing and, as of last week, landed in the top 14.

Quick recap: Adam Sanders, better known as Ada Vox when in full drag, auditioned for American Idol, got on the show, and made it through the grueling rounds of performances during the notoriously intense Hollywood Week. A few weeks ago, she destroyed her cover of Radiohead’s “Creep” and left us completely gagged.

Two weeks ago, Ada Vox sang an incredibly powerful rendition of “Feeling Good” by Nina Simone, which brought judge Katy Perry to her knees. Last week, the South San High grad sang a duet with Glee’s Lea Michele as part of the top 24 duets portion of the contest, which ultimately secured her a spot in the top 14.

But, sis, lemme tell you. During her April 22 performance, this Q U E E N strolled out in a dramatic, raven-like ensemble combining black feathers, silver fringe and rhinestones fit for the likes of Diana Ross and decimated the audience with her rendition of “The Show Must Go On” by Queen.

Fighting the roar of the audience’s applause, Lionel Richie was the first to comment: “Ada, you have no idea. You have no idea how fabulous you are. I am telling you – what I love most about you, is that you came here tonight to stop the show, OK? Without a doubt. I can’t even tell you who proud I am of you, and each time you come, you take us to another level and I am going to be right here to make sure I see you reach the top. You are on fire, my dear, on fire.”

“Not only did you stop the show, you finally started the show, queen,” said judge Katy Perry. “I was waiting for someone to show up. It’s exciting to see you spread your wings, obviously. I think you know how to maneuver the song choice stuff and I think that’s really important for singers right now.”

“The biggest voice I ever heard right there,” judge Luke Bryan said, gesturing toward the stage. “So, that’s all I got to say about that – good job.”

As pro-Ada as the judges have been this entire season, the choice is now up to America to decide who will continue on to the top 10. If you don’t know already, you can vote through text, online, or through the American Idol app (click here to learn how to vote).

“I’m not sure that the majority of America is ready for someone like me to be on that platform of saying that I am the next American Idol,” said Ada Vox in a recent interview with The Advocate. “But what I do know is that there is a big part of America that is ready to accept me into their hearts. It’s the people that love what I do that are the reason that I do what I love.”

On April 23, American Idol will be pre-empted for coverage of the Texas Cavaliers River Parade. However, updates on Ada Vox’s progress will be aired during the parade telecast. The American Idol delayed broadcast will be shown in its entirety on Tuesday, April 24 at 1:35 a.m. (Monday night going into Tuesday morning).