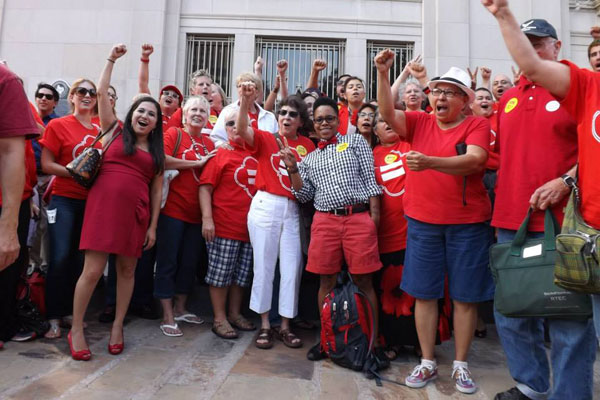 LGBT activists and allies in red shirts celebrate in front of City Council chambers after passage of the nondiscrimination ordinance on September 5, 2013. (Photo: Antonia Padilla)

(Editor’s note: Today marks the fifth anniversary of the passage of the city’s nondiscrimination ordinance.)

Despite loud and vocal opposition from Christian extremists, the San Antonio City Council on September 5 passed a nondiscrimination ordinance that includes protections for LGBT citizens and veterans. The vote was eight in favor and three against.

“It has been a long, hard struggle, but we are happy that truth, justice, fairness and equality have prevailed and that San Antonio has joined the 180 other cities across the country who treat their LGBT residents with dignity and respect. Now the time for healing has begun and we invite those who opposed this ordinance to meet with us in the spirit of forgiveness, reconciliation and mutual education,” said Dan Graney, co-chair of CAUSA, the coalition of LGBT groups and allies that was promoting the ordinance. 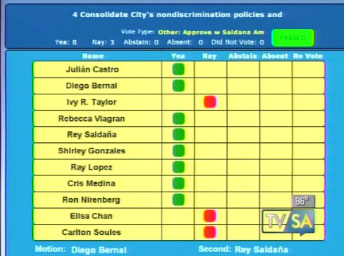 As expected, “no” votes came from Elisa Chan and Carlton Soules. Ivy Taylor who was previously undecided also voted “no.”

Councilwoman Chan said she was disappointed the ordinance was a “triumph of politics over policy, that political correctness prevailed over freedom of speech.” She made a motion to have the ordinance tabled which failed.

Taylor, the only black person on the council, earlier in the week was quoted in the San Antonio Express-News as saying she thought being gay was a lifestyle choice, a comment that earned her considerable criticism in the local press and in the LGBT community.

In her remarks from the dais, Taylor said that all human beings deserved respect without harassment but was unable to cast a vote in favor of the ordinance because she could not promote anything that “goes against our basic religious beliefs.”

“I really wanted to vote yes,” said Taylor, “but I know my heart. I am not a coward, I am not ignorant and I am not a bigot.”

Soules, who would not even meet with his constituents over the measure, nitpicked the details of the ordinance with City Attorney Michael Bernard. The councilman said he was disappointed in his colleagues because they did not insist on anything that”could have been better” adding that the measure had not been properly vetted.

In voicing his support for the ordinance, Mayor Castro said, “San Antonio is prosperous, fast-growing city. This ordinance is about insuring whether you are white or black, Christian or Jew, straight or gay, this city belongs to you.”

There was considerable doubt and anxiety for LGBT activists in the days leading up to the passage of the ordinance — not so much because they feared its failure but because of language that was added to the draft on August 21 that made it permissible to deny use of public restrooms to transgender citizens.

The text of the new edit read, “Nothing herein shall be construed as directing any policy or practice regarding the use of restrooms, shower rooms, or similar facilities which have been designated for use by persons of the opposite sex.”

Opponents of the ordinance were unhappy with the language as well. Soules and Chan said the new language did not go far enough in clarifying who could use public restrooms.

Rumors swirled that the language might be changed. However, because of the Labor Day holiday, the city was not able to post a copy of the new draft in time for proper public review. So no one knew what changes, if any, would be adopted.

In the end, Councilman Saldaña made a”friendly amendment” that addressed the bathroom issue with the following language: “Nothing in Division 5 shall be construed as allowing any person access to any sex-segregated place for any unlawful purpose.” 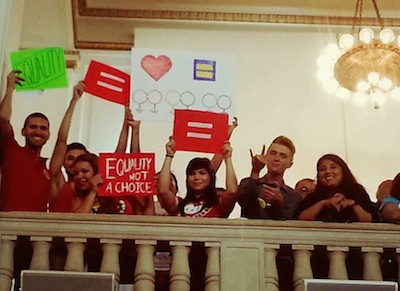 On the night before the vote, at the Citizens to be Heard session, over 700 people spoke before the City Council. The meeting which began at 6 p.m. did not conclude until about 1:30 a.m. the next morning.

On the day of the vote, over 120 people spoke prior to the item being open for council discussion and approval.

Anti-gay Christian groups formed a loud “vocal minority” in opposition to the ordinance. One source told QSanAntonio that the churches leading the opposition were busing in protestors from surrounding cities and had received funding from organizations outside San Antonio.

Some opponents sought to demonize LGBT people by warning that it would become a crime to disagree with the “homosexual lifestyle” if the ordinance was approved. Others said the ordinance would limit religious freedoms.

One group initiated an effort to recall Councilman Bernal and Mayor Castro, and in a ploy to get petition signatures, told voters the changes would allow men to use women’s restrooms.

Robert Rivard, publisher of the Rivard Report, a local online news magazine, posted to the publication’s Facebook page, “This is a hate-filled disinformation campaign and a terrible black eye for San Antonio. A ‘no’ vote will define those office holders forever.”

Elected officials and local organizations on both sides of the controversy added their comments in the final week.

Both the Greater San Antonio Chamber of Commerce and the Hispanic Chamber of Commerce endorsed the ordinance as did Spurs Sports and Entertainment, the owners of the city’s much-loved basketball franchises the Spurs and the women’s Silver Stars team.

Tea party darling, state Sen. Donna Campbell, send a letter to Mayor Castro in which she declared, “Any ordinance that ostracizes a majority of it’s citizens for their personal religious beliefs is wrong, whether you agree with those beliefs or not. It threatens our liberty and epitomizes the worst of Big Government. This ordinance doesn’t strengthen our rights as citizens. It weakens them.”

In a letter to Bernal, Congressman Lloyd Doggett wrote, “The failure to address discrimination at the state and federal level makes action by San Antonio all the more important. And actually, some of the recent comments made in opposition to you demonstrate why prompt action is necessary.”

The father of two students at Charlotte Anderson Elementary School in Arlington, Texas, has addressed the school district's board of...