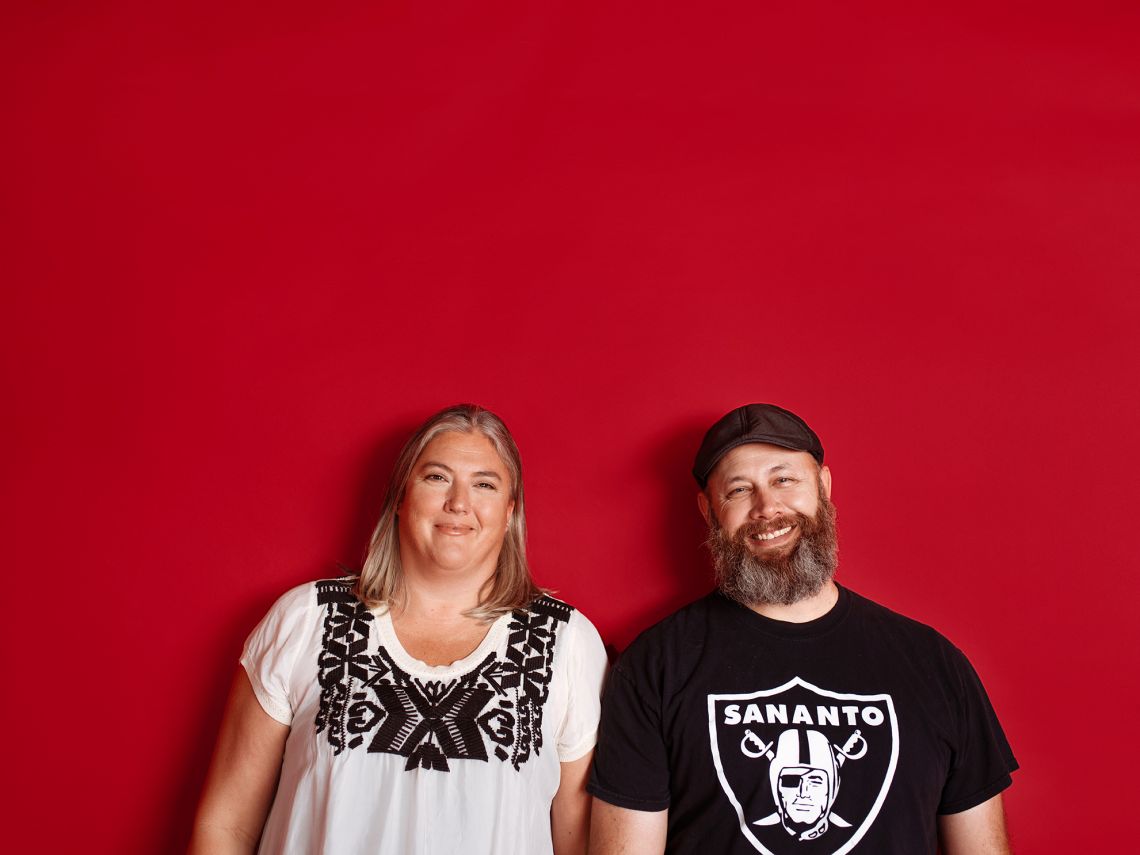 “When Jesse Mata asked us to talk to Elaine [Wolff] and Ray [Chavez] about Cornyation 2014, I was sure they were going to ask Steve to be King Anchovy,” says Jody Bailey Newman — and they did. “But then there was one more question: ‘Will you be Queen Anchovy?’ When has that (a dual regency) ever been done?” was her obvious response. “Never” was the answer.

Another question that might have also been asked was: Why them — together or separately? “I had recently been attending city council meetings on the non-discrimination ordinance, thinking ‘this couldn’t be a bad thing for the city,’ so maybe that’s what triggered it,” reflects Jody. But the groundwork had likely been laid long before. As proprietors of The Friendly Spot in King William, along with Alamo Street Eat Bar and B&D Ice House (with Jason Dady), their “friendly to all” mantra was already well-established.

“I first saw a photo of the original Friendly Spot [just down the street] on the wall at Justin’s Ice Cream in 2005,” says Jody, and thought, almost as a joke, that [to resurrect the institution] could be a retirement thing, a kind of fun side job — at which point Steve breaks in: “Running bars is not a side job. In hindsight, it was lunacy. We didn’t know what we didn’t know.”

So maybe a little lunacy got things started, but once the pair pulled the plug on the property (King Willie’s was a previous occupant), there was no turning back. “We started with the front bar, renovating just a little in the back, added a walk-in cooler [almost immediately covered with cedar to tone down its bright-silver commercial glare] and went from there. The cedar became our shtick,” says Steve. And, “Don’t worry, we’ll cover it with cedar,” another mantra. Along the way, and developed out of necessity, a second career for Steve as a sought-after beer delivery systems guru was born.

It’s not as though the Newmans especially intended to cater to the LGBTQ community in the beginning. “We initially wanted just to be an ally of [all] San Antonio, a place for everybody to hang out and have beer,” says Steve. “We developed this lingo,” adds Jody: “Be friendly … Let’s be friends … Viva friends!” It could easily have become another shtick, but instead just naturally evolved. A kiddie play station makes families a part of the scene, dogs are welcome … even politicos can feel free to put in an appearance. “We don’t stand up for one politician or another,” says Jody. “And we try to lend our business to all kinds of groups: Jewish singles, Young Republicans and Democrats, Planned Parenthood, Mothers Against Guns …”

On a less cause-oriented front, The Friendly Spot has also been the scene of lots of blind dates and “an incredible amount of proposals,” including a same-sex surprise get-together featuring kids and adults alike holding placards spelling out “Will you marry me?” (She said yes; the video is delightful.) Impromptu weddings have taken place with no previous notice to management. “They just show up!” All of which also leads to a staff that simply laughs and says, “that’s so Friendly Spot,” according to Jody. And also to a behind-the-bar cohort that’s as diverse as the clientele. “One of our staff heads a local ‘poly’ community,” says Jody as just one indication of the variety of attitudes and inclinations of employees. The result of all of this is not just the Anchovy appearance, but also a recent San Antonio Express-News Readers’ Choice award naming The Friendly Spot the Most LGBTQ-Friendly Bar of 2017. “It’s pretty wild. We were so excited!” says Jody.

So there is apparently no turning back on any of it — not that Steve and Jody would want to. Cornyation, for example, has now become a thing for the couple. They’ve enthusiastically participated as part of the court every year since 2014; 2017’s skit involved Jody as “Poison Ivy” and required that Steve, normally mountain-man hirsute, shave both head and luxuriant beard in order to appear as a contrite Kevin Wolff in a routine that spoofed the Golden Toilet, downtown’s first (and priciest) public facility.

But as important as it is that the Newmans be willing to hang themselves out there in Cornyation’s bawdy atmosphere (they’re already planning for next year), they’ve proved their talent for getting otherwise high-minded folks to participate as well, according to Elaine Wolff, the show’s longtime co-emcee. “They’re great at getting cameos from powerful people,” she says, “and they are equally great at getting [hospitality industry] people to contribute to a fundraising total that is now up to about $200,000 per year” — all of which goes to LGBTQ charities. “Steve and Jody ‘get it’ [on all fronts],” she adds.

That assessment is seconded by Equality Texas’ DeAnne Cuellar, who says she first met Jody at those early non-discrimination ordinance meetings. “I looked around and saw that we had [plenty of] progressive voices, but nobody from the more conservative side. I asked Jody if she’d be a spokesperson, and not only did she say yes, but she mobilized others [in hospitality] to participate. It’s not too much of a stretch to say that she was one of the reasons we were able to pull together over 50,000 people and 2,000 businesses to arrive at a state victory over the bathroom bill. She had a way of explaining [to her peers] just how discrimination was not only wrong but bad for business. Jody was a true catalyst,” says Cuellar.

Be friendly to all, in other words.

Emily Leeper When Emily Leeper’s then 14-year-old daughter Jackson confided in her that she was gay, she let her child...