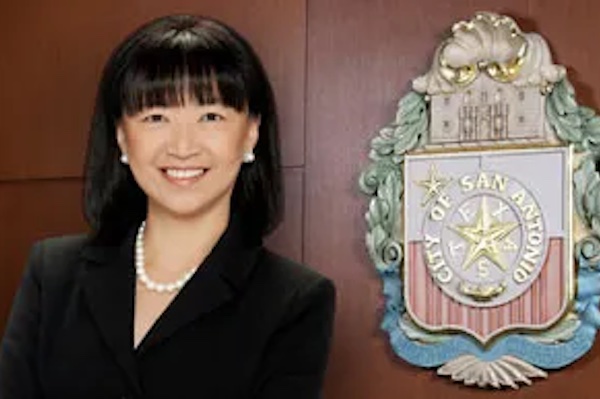 Columnist Gilbert Garcia of the San Antonio Express News reports that former City Councilwoman Elisa Chan, who expressed anti-LGBTQ views while she was in office, says she wants to run for the Texas House District 122 seat currently held by Lyle Larson.

“Chan, 55, says she’s definitely running if Larson steps aside,” Garcia writes in his September 11 column. At least two other local aspirants have expressed interest in running as well.

This is not Chan’s first bid for state office. In 2014, she ran for Texas Senate District 25 but lost the primary to Tea Party Republican Donna Campbell.

Chan was elected to the San Antonio City Council in 2010 representing District 9. During a staff meeting in July 2013, she was covertly recorded making anti-LGBTQ remarks. At the time, she was trying to formulate arguments against the then-proposed nondiscrimination ordinance that would give LGBTQ San Antonians equal rights.

“This is my philosophy, guys. Whatever you want to do in your bedroom is none of my business, but do not impose your view on other people, especially becoming policy … because personally, I think it’s just disgusting just to even think about,” Chan tells her staff on the recording.

On August 21, 2013, the Express-News editorial board called for Chan to step down: “Bigotry and intolerance might define Chan’s personal view on homosexuality and gender identity. But they have no place in public representation. Elisa Chan should resign from City Council.”

A Facebook page titled Elisa Chan Should Resign followed soon after. Chan’s comments were splashed all over the internet including the Huffington Post, the Texas Observer, the Texas Tribune, the Dallas Voice and every major LGBTQ blog in the country.

During a press conference, Chan did not back down. “Political correctness will not win this day; standing firm as an individual in service to the whole community does,” she said. “I stand strong in my First Amendment right to freedom of speech and our right to privacy.”

Depite Chan’s protestations, the nondiscrimination ordinance passed by a vote of 8 to 3 on September 5, 2013. About a month later, she resigned, citing her desire to run for the state Senate.

No one is sure if Larson will give up his seat in the very conservative House District 122, even though the chatter is that he may well leave the office with an eye toward other political ambitions.

If Larson leaves, Chan is hoping to grab the reins. “Several people approached me about this race, and I have also spoken to grassroots leaders, including people from the Republican Party, she told the Express-News. “I think they would be favorable about me running if Lyle doesn’t.”

San Antonio queer rapper Chris Conde (them, they) has released a new video from their latest album, Engulfed In The...