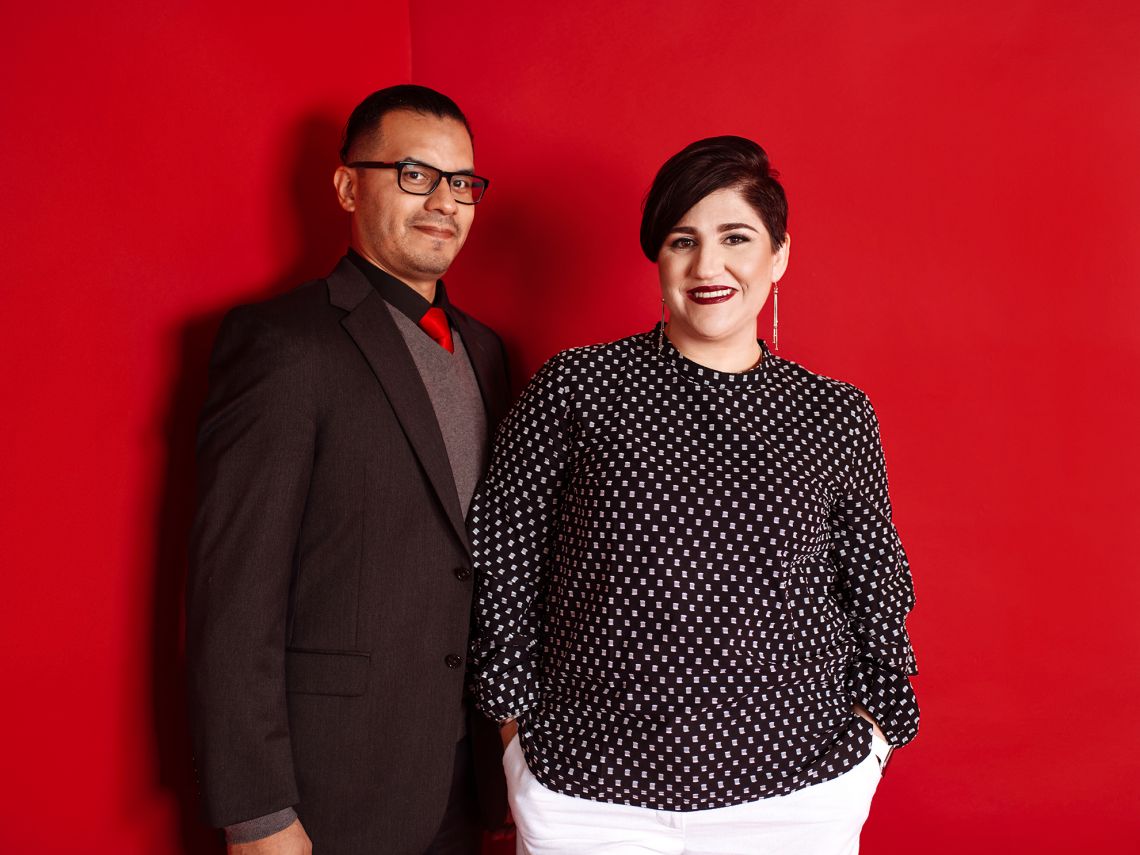 Two-thirds of the way in, DeAnne Cuellar-Cintron and her partner Louis Cintron Jr. confessed that they worried our interview would seem boring. To them, their reasons for being longstanding allies to the local LGBTQ community were simple. “We got heavily involved with the LGBTQ community when we were younger because they were our friends,” said DeAnne, who identifies as a queer Jewish Latina, “they’re our best friends, the people that we could not live without, our chosen family.”

From a gender-neutral wedding ceremony in 2007 (at the queer-friendly Esperanza Peace and Justice Center) through today, Louis and DeAnne have made advocacy a central principal of their relationship. “Part of the reason why we are partners in marriage is because we both see eye-to-eye” on being allies, said Louis during a joint-phone interview held in between feeding their chickens and preparing dinner. That being said, the two engage and support the community in notably different, but complementary, ways.

DeAnne is part of the communications team for Equality Texas, an organization that’s one of the state’s fiercest fighters for LGBT rights. She came to that job after working as chief of staff for former District 3 Councilwoman Leticia Ozuna, whose longstanding marriage to Sophia Parafina drew media attention in 2013 when the couple publicly acknowledged Parafina’s transition from male to female, during San Antonio’s contentious battle to pass a non-discrimination ordinance that included LGBT citizens. “I spent a lot of time explaining why Ozuna and her family just wanted to be a family with a teen daughter and a son in college,” said DeAnne. “Sophia was just living her life — she didn’t ask to be a trans activist.” Ozuna and Parafina became targets of homophobic remarks anyway. Ozuna’s term ended while the NDO was still on the table, and DeAnne continued to pursue the policy until it passed in September 2013. “I found out that working in the equality space was something that I was really passionate about,” said DeAnne. Not long after, Equality Texas came calling. Unlike DeAnne, Louis is not professionally involved in LGBT advocacy, and in some ways, that makes his outspokenness harder, and more consequential. A federal contractor in the white, cis male-dominated IT industry, he says he’s witnessed several instances of sexism, racism and homophobia on the job. For him, “It ends up being a gateway for a learning experience, to explain to people ‘hey what you said or what you did just now is not appropriate.’” While he tries to do this privately if possible, he’s not afraid to take it up the chain if the offensive behavior doesn’t stop. These experiences weigh heavily on Louis. “There’s been so many times where he comes home and he’s just sick with something he’s heard or seen and he has to decide whether or not he’s going to escalate something within the company,” said DeAnne. “It’s never popular,” Louis confirmed, saying that he’s sometimes left jobs because the workplace was hostile.

Lately, Louis has also been busy supporting DeAnne, whose work with Equality Texas ramped up considerably after Donald Trump’s election and a particularly nasty state legislative session that featured the transphobic “bathroom bill” proposal. Though the loathsome legislation never passed, it had a zombie-like lifespan, forcing the Lege into special session. From January 10 through August 16, DeAnne said her life was mentally, physically, and emotionally taxing, and trying to kill the bathroom bill “was one of the hardest things I’ve ever worked on.” She credits her partner with helping her keep it together. “Louis was the person who made sure I ate, made sure that my phones were charged, made sure groceries were bought, made sure the cats were okay … I could not have done it on my own.”

DeAnne also offers not only emotional, but practical support when Louis confronts homophobia and sexism at work. “I don’t know what it’s like, so I can’t speak on their behalf,” said Louis about trying to be an effective ally to marginalized communities. “I have to hand it off to someone who is dealing with sexism or LGBTQ issues.” He often comes home with questions, which DeAnne can help answer through her personal experience or knowledge from working with Equality Texas.

At a time when advocacy seems even more non-stop than ever, DeAnne and Louis draw on their faith (she is Jewish, and he was raised a Jehovah’s Witness) and their strong, shared moral compass to keep each other going. Their advice to other allies is to stay involved with local groups, speak out to local media, and make time for self-care. Even with their busy schedules and serious commitments, Louis said they recognize that “you have to pause sometimes and comfort each other.”

Forty-three films from over 15 countries will be screened this weekend at Pride San Antonio's QFest LGBT International Film Festival...