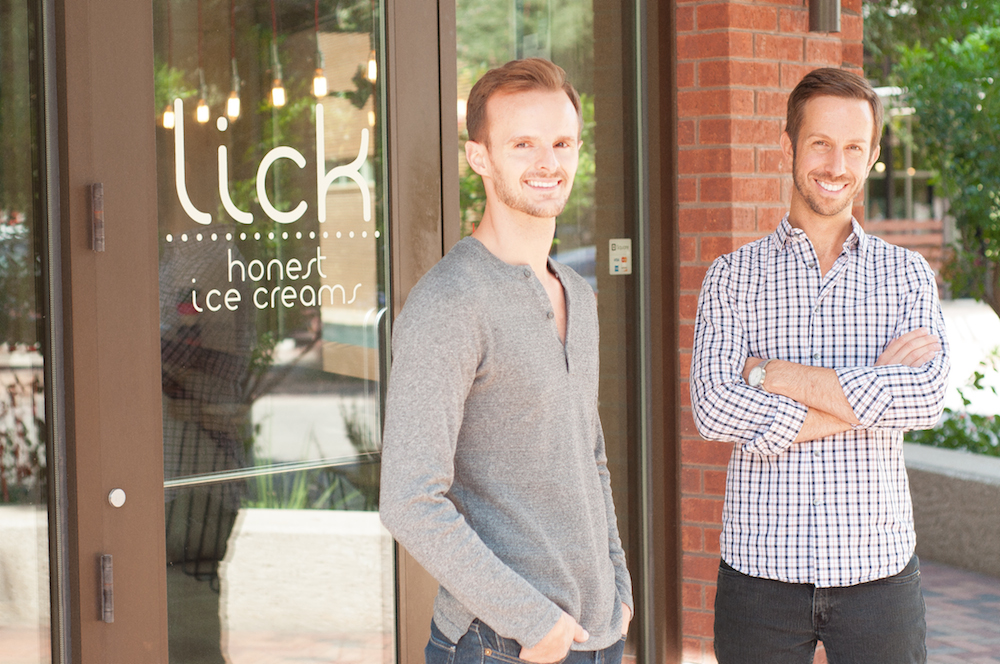 “On our first date I told Chad that I would be moving back to Texas in five years,” Anthony says.

That conversation took place in New York City in 2005, and Anthony Sobotik and Chad Palmatier hit the target dead-on, arriving in the Lone Star State, with a stopover in Ohio, of all places, in 2010. The Austin Lick flagship opened on October 19, 2011—at 7 p.m. for you sticklers for detail. Ice cream had not been a part of that early declaration.

Sobotik grew up near Shiner, but the move from Ohio to Texas was “a huge life change” for the couple, who left New York in part because they wanted to buy a house together—and “you can’t do that there.” Ohio was a distribution hub for Limited Brands, among whose labels is Victoria’s Secret, and for whom Palmatier was a store designer. The job required a lot of travel, which often left Sobotik at home to pursue gardening and event-planning. Eventually he worked for a small bakery where he developed recipes. “I taught them about kolaches,” he says.

Still no serious ice cream. Sobotik was raised on Dairy Queen, but Pennsylvania-born Palmatier had enjoyed a tradition of small creameries and seasonal flavors. During frequent visits to Austin—Sobotik is a UT alum—they would wonder why nobody was producing that kind of artisanal product in Texas—but not “why aren’t we doing it?” Ditching Palmatier’s corporate rut, and maybe just to make that five-year deadline, they quit their Ohio jobs, sold their renovated house in two days, and hit the road to Texas without a plan and without looking back.

A plan of sorts emerged en route when Palmatier interviewed with an H-E-B recruiter on the telephone at a rest stop in Alabama. The pair spent six months in San Antonio, where they “fell in love with” Pearl; they had no clue then it would become a second Lick location. In fact, the ice cream “Aha!” moment  that produced Lick didn’t come until December 2010—the 26th, again for you sticklers. As Sobotik recounts it, the conversation went something like this: “So, I’ve been thinking … I think we should open a shop.” By January 15 they were looking at locations in Austin, where they were more familiar with the food community and the farmers market scene.

The pair works with Mill-King Market & Creamery, a dairy farm outside of Waco with a herd of 150 grass-fed Brown Swiss, Holsteins, and Jerseys. (No names, these cows, just numbers.) Lick makes its custom base mix, “free of any artificial hormones and antibiotics,” at Mill-King in the dairy’s pasteurizers, avoiding “a mix from a distributor that is full of stabilizers, fillers, and high-fructose corn syrup,” says Sobotik. The final product is handmade at a facility in Northwest Austin.

Lick locally sources other ingredients whenever possible, but that doesn’t mean their flavors are limited. The everyday lineup includes Texas Sheet Cake (with a flavor profile straight out of a church potluck), a mellow mix of goat cheese, thyme, and honey, and a bold blend of roasted beets and fresh mint. Dairy-free and vegan options include vanilla pear and coconut with avocado curd. Last summer they cranked out smokey melon and sea salt and a pretty carrot and tarragon. You can find the fall (Apple Cheddar Shortie!) and winter lineup at the local Lick at Pearl and in pints at Central Market .

Promotion, development of new markets, constant flavor innovation … all this means a lot more time together. “We’re a couple and now we can’t ever leave it … we literally spend all of our time together,” Palmatier says reflectively. “We realized there would be some challenges.” Add to this a new family, of sorts—the staff, whom the guys take on outings such as apple-picking in Mason—yes, for the Shortie. “It keeps me up at night if an employee is having a tough time with something.”

“In five years we want to have a few more shops—nothing out of control,” Sobotik says. To which Palmatier adds, “at least one in each major city.” And in each of those cities they want to be working with local suppliers and “food artisans” who will contribute everything from a custom chocolate sauce to foraged dewberries. The idea, they say, is to develop regional flavors but to distribute them statewide: Dallas, meet San Antonio; Austin, meet Houston.

All of this sounds like a lot of work for what is basically a two-man enterprise, one founded on the notion that “we’re doing what we do because we like it.”

“Yes, we can get more streamlined,” Palmatier says hopefully, but, “at the end of the day, we still have to peel apples and put them into the mix by hand.”

Photos to good to waste: View the slideshow of Julian Ledezma’s Lick outtakes.

Summer 2015 is on stands! And by stands, we mean check our growing Google map of locations.