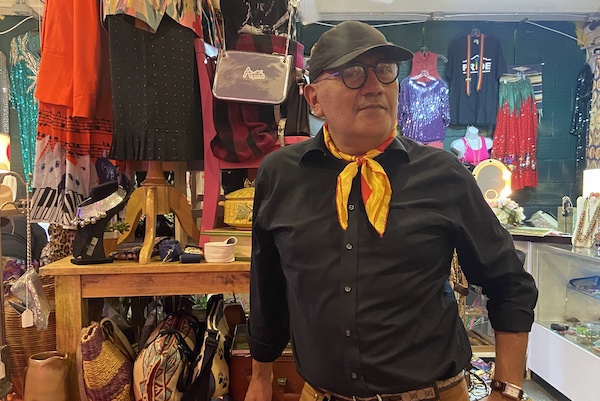 The Ruby City contemporary art center in San Antonio has commissioned local artist and designer Agosto Cuellar to create an altar in observance of this year’s Dia del los Muertos, which is observed on November 1.

According to a Ruby City press release, Cuellar “will be honoring local artists and fashion designers using his signature approach of reusing and recycling materials.”

Cuellar has been creating art, most notably in fashion design, for at least three decades. In 1990 he he participated in his very first exhibition at Planta de Arte Nuclear, which featured polymer clay and feather earrings he created. Cuellar staged his Runway en la Calle for 10 years starting in 2008. The fashion show, which was staged on a ramp on Buena Vista Street near the Guadalupe Arts Center, featured clothes that offered a striking example of his unique fashion sense.

From 1999 to 2011, Cuellar ran Jive Refried, a vintage emporium in Southtown. The store was established as part of a 20th anniversary exhibition at Clamp Light Artist Studios & Gallery.

Cuellar was honored with the 2018 Cultural Pioneer Award from Texas Fashion Week as well as the 2021 Womenswear of the Year Award.

In 2019, Cuellar created “Barrio Folk Baroque,” an eclectic collection of garments he presented during New York and Paris fashion weeks in association with the retail and production company Flying Solo.

Agosto Cuéllar Día Del Los Muertos altar. Plaza at Ruby City, 150 Camp Street. (210) 227- 8400. Thur to Sun 10 am—6 pm. The public is invited to view the construction and design of the altar which begins on October 30. The finished altar will remain on view through Sunday, November 2.

A bill that marks the Texas GOP's fourth attempt to pass legislation targeting the participation of transgender student athletes is...