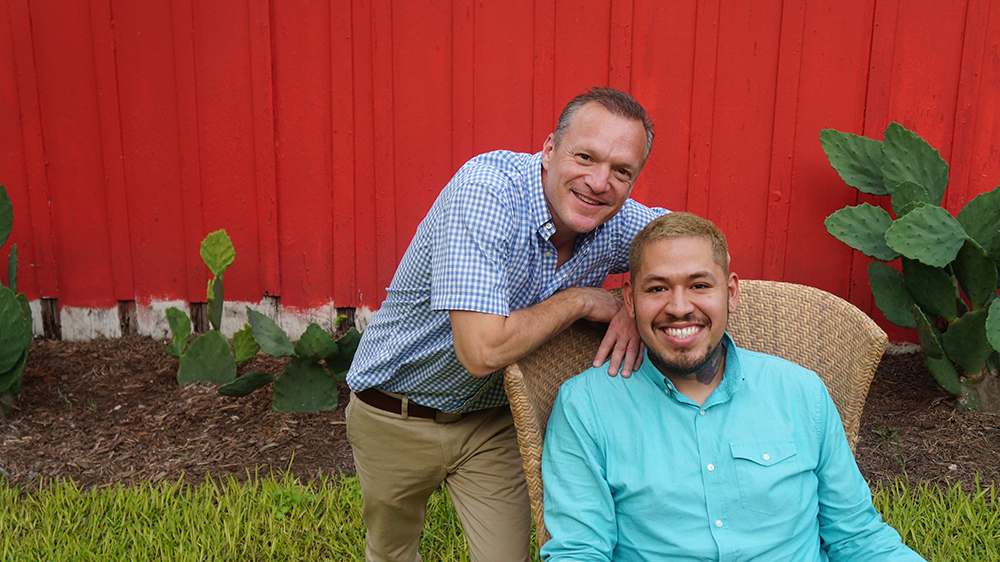 A wandering landscape artist makes a home in Denver Heights

Joe Carmack wants to plant orchards. Urban orchards. Orchards composed not of apples in the pioneering-America-of-legend sense, but mostly of citrus—with a pomegranate or two here and there. “They do well in San Antonio,” he says.

But for the moment he’s focused on a pioneering effort of another sort: bringing buildings back to life in the East Side’s Denver Heights. We’re discussing his efforts at revitalization in the house he and his partner, David Marquez, occupy on Denver Boulevard—over tea, no less. “Oh my God, I love tea,” he says, without a touch of affectation or irony. It’s mint tea, served from a teapot handed down by his grandmother, and in the grand tradition of such beverages our discussion is a kind of negotiation—not having to do with the price of a carpet but over information: I offer some, he reveals some more….like that.

I first learn that Carmack is a San Antonio native who left to pursue a degree in landscape design from George Washington University. Upon graduation he stayed on in the nation’s capital to open a garden shop. During his 20 years there, he also wrote an occasional gardening column. Obliged (but “excited”) to return to San Antonio three years ago to assist aging parents, he first landed in Mahncke Park. “I didn’t do much to the bungalow there,” he says. And he quickly began searching for another property.

He found the Denver Heights house almost a year ago. “It was the next-to-cheapest property I was shown,” he says, adding that, though solid, it was not much more than a shell with rough boards and “vegetation growing inside.” But price was not necessarily the determining factor. While some might feel hesitant about undertaking a project east of I-37, “I definitely wanted to be here,” he states. For Carmack, it’s all about  proximity to downtown and Southtown, the availability of public transportation … “I’m about 10 minutes away from everything,” he enthuses—and his enthusiasm is palpable.

He might have said that it’s also about the availability of good, if often neglected, housing stock and, once you consider that there is some meaning in the “Heights” part of the neighborhood name, the fact there are great breezes. “I had to clean it all up with sheetrock, but this house breathes,” he says.

The quietly intense Carmack must nevertheless be something of a taskmaster, as the house looks much more than merely cleaned up—and the work, accomplished with the help of a contractor, took an astonishingly short four months to complete. Bamboo floors (bamboo is sustainable, he points out) now gleam, colorful walls serve as backdrops for a personal art collection, a spiffed-up kitchen (“We don’t cook that much,” he admits) offers the latest amenities. And in the back yard, a freshly painted, but still slightly listing, shed awaits a more permanent foundation. Plantings of cacti, their soft green paddles contrasting with the structure’s vivid barn red, testify to his continuing horticultural interests.

A version of that same assertive red, here accented with a soft Colonial blue, announces Carmack’s second project in the ’hood, an almost completely renovated four-plex just down the street. Facing Denver is a building housing two, two-story units; in back, a structure containing a pair of one-story apartments helps frame a new, caliche-paved courtyard dominated by a magnificent grapefruit tree. Carmack rents these apartments as short-term accommodations for tourists and conventioneers, but the transient nature of the clientele in no way suggests a casual attitude regarding finish and detail. In one of the units, the dining table is set with pieces of Carmack’s mother’s china in anticipation of an arriving tenant, the bedcovers carefully fluffed and tucked … and guidebooks are thoughtfully laid out near a television fully loaded with Netflix and Pandora connections. In contrast to long-term rental, “there’s lots more involvement from me, so I’m here almost constantly,” he says—and one gets the impression that, the better to keep an eye on things, he likes it that way.

Given the rapid pace at which Carmack’s first two projects have been completed, it’s logical to ask “what’s next?” Possibly a breather–though he clearly enjoys the variety of visitors that pass through from places as diverse as Minnesota and Holland. “Maybe something more community-oriented,” he offers. Those mini-orchards, for example. That grapefruit tree may now stand as symbolic inspiration, but “the soil is really good around here,” he says, returning to East Side booster mode. Satsumas, sweet kumquats and Meyer lemons here we come. (Meyer lemon is especially good with tea, just FYI.)

The Ashe Award is given to those “whose contributions transcend sports.” If we can’t see eye to eye on this,...