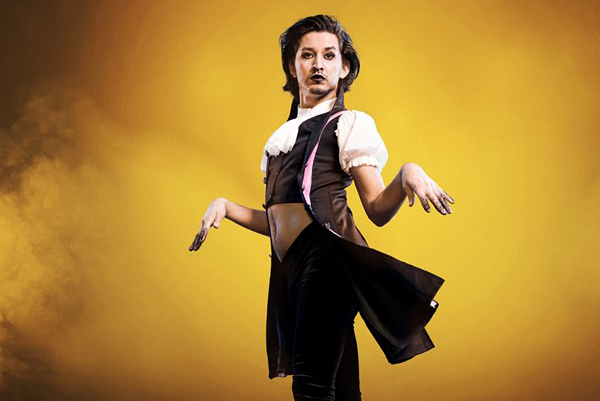 Jennie Livingston’s cult documentary Paris Is Burning and — like it or not — the music video for Madonna’s derivative anthem “Vogue” will forever pop up in conversations about ballroom culture. But as famed critic Guy Trebay pointed out in a 2000 Village Voice story dubbed “Legends of the Ball,” those two 1990 works are essentially “station stops on a cultural continuum, affectionate but voyeuristic peeks into a tradition dating back to the 19th century and going strong into the 21st.”

With roots in underground masquerades thrown in Harlem by Black and Latino LGBTQ+ communities as early as 1869, balls as we now know them are dramatic events in which the building blocks of vogue — catwalk, hand performance, duckwalk, floor performance, spins and dips — are on full display as houses compete in various categories for trophies, prizes or bragging rights. While certain categories focus on appearance — face, body and the like — others are based on dance abilities or “passing” as a member of a different social class or persuasion, from “executive realness” to “butch queen up in pumps.”

In recent years, ballroom has experienced a cultural resurgence reflected in mainstream TV shows such as Ryan Murphy’s FX drama Pose and the HBO Max reality competition series Legendary. There’s plenty to be said for both shows: Pose made television history by casting five transgender actors in series regular roles; and Legendary digs into the mechanics of dance, teamwork and some of the blood, sweat and tears behind an acrobatic — and even hazardous — form of self-expression.

Over the years, Padron and Styles worked together on choreography, auditioned for reality competition shows — including America’s Best Dance Crew and America’s Got Talent — and eventually became founding members of House of Kenzo, a still-active troupe that fuses elements of vogue, avant-garde fashion and performance art.

In a serendipitous turn of events, Padron and Styles both landed on the second season of Legendary, albeit as members of opposing houses. While Padron competed with Dallas upstart House of Luxe, New York-based Styles competed with the House of Oricci. Adding to the unusual circumstances, the two old friends weren’t permitted to socialize on or off set. And sitting on the judging panel alongside Houston rap superstar Megan Thee Stallion, celebrity stylist Law Roach and esteemed actress Jameela Jamil was none other than Leiomy Maldonado, the transgender ballroom legend who introduced Padron to his chosen performance style: vogue femme.

We recently caught up with Padron — who is better known these days as Akasha Luxe — to quiz him about his turn on Legendary, the origin of his new stage name and the recent dance mishap that left him with a broken fibula. How did you hurt yourself?

I was competing at a kiki ball in Dallas. Usually, I dip with my right leg. But in the moment, I was really feeling it, so I dipped with my left leg. When I landed, I didn’t catch myself with my hands, so all my weight got absorbed in my fibula and it snapped. I literally slithered away [laughs]. I went outside for a little bit, then I came back in because I wanted to watch the ball. So, I stayed for the whole ball and went to the emergency room after that. They gave me a splint and told me to go see a foot doctor. I got surgery a week and a half later. They put three pins in … and said that it would heal, and I would be able to do everything … just not dipping like a virgin.

Tell me about the name Akasha. What does it mean to you?

So Akasha just means “space.” The Akashic records are what really inspires me. It’s a concept that you can pretty much tap into this state of consciousness where you have access to everything that’s ever existed in the worlds. It’s also associated with The Queen of the Damned … There’s a feminine side to my performance and that’s who Akasha is. Before Akasha, I was going under Ynot, which is just Tony spelled backwards.

How did you land on Legendary?

I met Nemo Luxe — the father of the House of Luxe — around 2018 at a ball in Dallas. It was my first mainstream ball, and I walked the virgin category. I had already been walking since 2015 but it was always at kiki balls — there’s a kiki scene and there’s a mainstream scene. The kiki scene is not as serious as mainstream but it’s still part of ballroom. I met Nemo at that ball, and he asked me to be in the House of Mizrahi. And so that was my first house. From there I kept in touch with Nemo. We would go to balls [and] compete. [The show producers] reached out to him and said, “We want you to come on this show.” And he reached out to me and was like, “Do you want to be a part of this?” Fuck yeah.

How long were you in LA filming and what was that experience like?

We started filming in February … and it was like a month and a half. It was so fun. It was also different because of COVID. There were all these procedures and protocols. We had to get tested every day and we also couldn’t really interact with the other houses. Blogger Rodrigo Palos created fan art of Akasha Luxe based on the “Tinseltown” episode of ‘Legendary.’

You weren’t able to hang out with Karma?

So, I did see Karma when he got there … [From] my hotel room, I was able to see everyone getting there … [After that] the only time we would see each other was when we would have to go get tested on one of the other floors, we would be passing by the other houses … I did get to talk to Karma once [the House of Luxe] got eliminated [on the third episode].

Luxe was the newest house in the competition and then lost a member right before it started. What did that feel like?

It sucked. And I honestly fucking cried. Because Jah Luxe is the youngest member in the group and to me it was so heartbreaking that he didn’t get the opportunity to be on stage with us. It hurt because I know what that feels like. I’ve been auditioning for TV shows for years trying to get on a competition series and wouldn’t make it. And it would suck. To me it just hurt knowing that he had to go through that. It was just crushing for him. It was definitely something we had to adapt to really quick. Because it happened right when we were gonna film the first segment — the Grand March. We already had formations done and we had to change everything.

Did he want to keep going?

Yes. He had a broken arm, but he was still doing the routine with us. They just didn’t let him because it’s a liability.

You got some constructive criticism from the judges about your confidence level on stage. Did those remarks ring true to you?

Yes, they did. And yeah, I took their critiques and on the next performance I really brought it.

You also got some compliments, like when Megan Thee Stallion said she thought you were the shit.

I was like, duh! [They may have called] me out for looking nervous but the thing is: I still killed it. I didn’t mess up or anything. It was really refreshing to hear Megan say [that]. Leiomy also gave me my 10s but a lot of the [remarks] didn’t make it onto the show. Sometimes the compliments [don’t make the cut].
How do you think Legendary measures up to other reality competition shows?

I think it surpasses a lot of dance competitions. Because there’s multiple components to ballroom that amplify the production, the presentation of dance. I just think the production level on this season of Legendary was next level — the lights, the LED screens.

How authentic or true to ballroom culture do you think the show is?

Is the House of Luxe still active post-Legendary?

Yes, it is. Right now, we are planning to attend balls and eventually we are going to throw our own balls. But we are currently working on recruiting people.

Outside of House of Luxe, what’s on your horizon? Are you planning to stay in San Antonio?

Yes. Because my family’s here — I don’t want to move away from them. But I do want to do more work as an artist. I don’t want a regular job, I’ve spent a lot of years doing the nine-to-five thing and I need to try freelancing as an artist and try to make that work … performing arts, releasing music, I also get booked as a DJ.

I worked for VIA. I was a bus driver for a little over a year. I started when the pandemic started. … It was crazy. … It’s the hardest job I’ve ever had.

In a nonbinding opinion, Ken Paxton said the Texas Behavioral Health Executive Council doesn’t have the authority to punish social...