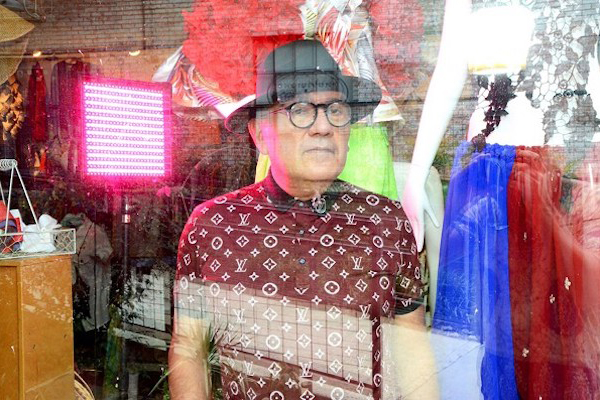 San Antonio designer Agosto Cuellar in the window of his new Blue Star boutique Augustine. (All photos by Bryan Rindfuss.)

The last time we spoke to local designer Agosto Cuellar, he was between two milestones.

First, he was selling off the final remnants of Jive Refried — the wildly creative Southtown vintage emporium he ran from 1999 to 2o11 — as part of a 20th anniversary exhibition at Clamp Light Artist Studios & Gallery. Second, he was putting the finishing touches on “Barrio Folk Baroque,” an eclectic collection of upcycled garments he presented during New York and Paris fashion weeks in partnership with the retail and production outfit Flying Solo.

Not that he ever said “never,” but Cuellar has somewhat quietly returned to the realm of retail via Augustine, a boutique he named after his grandfather.

Situated in a Blue Star space previously inhabited by Mockingbird Handprints, Augustine reflects Cuellar’s keen eye for picking, pairing and repurposing — talents he learned as a kid and still cultivates via his day job in the marketing department at Goodwill — along with his lifelong love affair with rasquache, an artistic practice rooted in celebrating and transforming everyday materials. How was your experience showing in New York and Paris?
It really was an eye-opening experience for me as a sustainable fashion designer — because [my work] was really accepted. I felt like I was gonna have some kind of pushback … but sustainable fashion, recycling, repurposing has already taken hold in New York and Paris. And so, I got invited at the right time [to show] my 2019 collection. It was a time to meet other designers from around the world, some emerging, some established. I think the most important takeaway was meeting people that are doing the same thing I’m doing. San Antonio can be a bubble, and there are not many people doing this. But in New York and Paris, oh my god, there are stores [on every block] with a real wow factor.

And there was also a retail component to the shows?
It was with Flying Solo, and they do have retail stores in New York. They showcased eight of my pieces and those were available to photographers, editors, other designers and people that were producing shows. A couple of my things got picked out and paired with other stuff. One Spanish designer paired my designs with her hats and it just worked. I was like wow! She did a photo shoot for a magazine back in Madrid. So, it was a lot of that [sort of collaboration]. The way they have it set up, it’s more of a designer showroom. But that in itself was interesting. I took a little bit of everything because I didn’t know what to expect. Some of my stuff got used, some of it didn’t [Flying Solo] curated the looks and they had a stylist that made sure the shoes [and accessories] worked. It’s funny because my shoes didn’t get there in time — I ordered them online — but the show had to go on.

So, what did your models wear?
I was so blessed that this other designer that was set up next to me had these fabulous shoes — strappy gold high heels. [The stylist] told her they didn’t work with her outfits and that she needed combat boots. So, she went and bought eight pairs of combat boots and gave me the gold shoes. We’re still friends. She’s amazing. … And the shoes were perfect with my outfits.

I was thinking I was gonna have to send the models out barefoot. I was freaking out. But she saw me, and she was like, “Don’t worry … you can have these.” So that was [a good example] of a designer coming through for another designer. The community feel was very present. Reconfigured accessories are among Cuellar’s top sellers at Augustine.

How did your new boutique Augustine come about?
It happened very organically. I wasn’t looking for a space — which you probably wouldn’t believe because of all the stuff I have. … Before COVID, I was doing pop-ups at Brick and other locations. But I got tired of the hauling and unloading, and then display, and it was up for four or five hours and then you take it down. And so, I approached Elizabeth [Ciarfeo] at Brick and she said, “Hey, you should look into this space.” So, I reached out to James [Lifshutz] with the intention of just doing a pop-up shop. And James had actually been to Jive back in the day. So, he knew the concept, he knew what I was about, and how I made [Jive] into an installation piece and gathering place for people to hang out and find unique items. And he asked, “Why do you just want to be there for a couple of months? Why don’t you sign a lease?” So, I did. And here I am [laughs]. … And he worked with me, because they’re trying to revitalize after COVID and get people interested in coming back. We just recently had First Friday and there are new tenants: there’s Helotes Creek Studio, Divine Sunshine Vintage and Slab Cinema moved in and they’re doing an arthouse.

It’s great that there’s new energy at Blue Star.
I like to say we’re in the “Soaring ’20s” instead of the Roaring ’20s because it’s starting to soar again. I know we [still] have issues with the pandemic but people are masking up and taking precautions. They still want to be out — because that’s just who we are as artists. I don’t have the street windows like I used to at the old store. But I really am excited about the tenants around me. I do really well off the traffic from Stella, Sukeban and Brick. And I haven’t really promoted Augustine. It’s been very organic. … I’m still settling in. … And I’m older and wiser than I was when I had Jive. Over there, I was like promote, promote, promote, promote. Here, I’m on a more thought-out route. What have customers been buying?
I’ve done really well with my repurposed stuff. I get to do model fittings here, I get to showcase my work — the stuff that I recycle, repurpose. [Augustine] was really about that. But I felt that just doing that wasn’t enough to keep the clients coming back. So, I [brought in home accessories] for people who are nesting. People [are shopping for] dishware, things for the house. I really want it to be a destination for other designers — I want to do trunk shows, I want to do events where people can showcase their work. I’m not doing any consignment only because I haven’t gotten there yet. I named it Augustine after my grandpa. That’s why I’m Agosto: it’s derived from [my grandfather’s name]. I wanted to honor the fact that he was a businessman. He owned several bars. … My parents are part of the business as well. My mom runs the register, my dad helps hang stuff and price stuff, and my sister and my nieces all help. So, First Friday is a family thing. [Opening Augustine] has been a family-building way to see my parents more often. … We have lunch, we hang out and talk. And that part I really love because for a year I didn’t see them due to COVID. It was tough. And now we’re catching up. My mom is really the reason I got into fashion. She’d always take me to thrift stores when I was a little kid, and I was wowed by everything. I just loved it — and it never stopped. So, when she comes in here, she’s all dressed up. She wears all her stuff and [folks are] like, “That’s your mom? Oh, now we know where you get it from.” Yeah, my mom’s definitely a little fashion diva.

Are you keeping the same hours every week?
Yes, we are. That’s one thing that I learned from Goodwill — to be consistent. I’ve also learned some other valuable things at Goodwill. I think my price point is right on [target] with a boutique, but not a high-end boutique. I want people to come back. I want them to feel like they’re getting a deal. I don’t want them to feel like I’m doubling or tripling the prices. I don’t want to be that guy. I find stuff for it to go away — I don’t find it for me. I love the thrill of the hunt. I’m buying it for someone else. I just don’t know who that someone else is until they show up at the front of the counter and say, “I love this piece. This is me.”

Editor's Note: Gregg Barrios passed away on Tuesday, August 17 from a heart attack. Following is an excerpt of an...