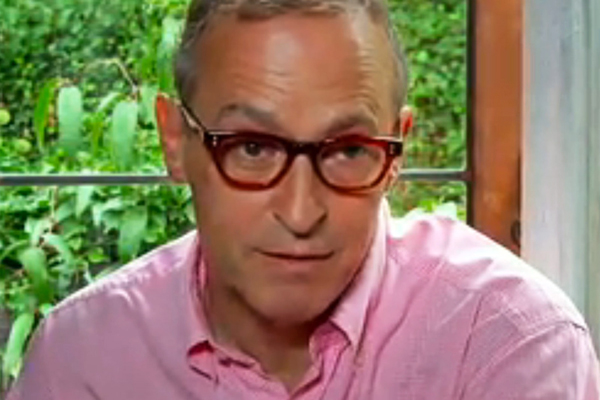 Humorist David Sedaris will be in San Antonio on April 29 for an appearance at the Tobin Center for the Performing Arts. (Video capture via YouTube)

Humorist, comedian and author David Sedaris will be in San Antonio on April 29 for an appearance at the Tobin Center for the Performing Arts which will include readings, an audience Q&A and book signing.

Sedaris is a master of satire, a skill evident in his numerous books, essays and short stories. He is the author of Barrel Fever, Holidays on Ice, Naked, Me Talk Pretty One Day, Dress Your Family in Corduroy and Denim, and When You Are Engulfed in Flames. The audio version of his book, Let’s Explore Diabetes with Owls, received a Grammy Award nomination for Best Spoken Word Album. Timothy Olyphant in the 1996 world premier of the one-act, stage adaptation of David Sedaris’ “The SantaLand Diaries.” (Photo via Pintrest)

The essay, The SantaLand Diaries, which is included in Barrel Fever, is the humorous account of Sedaris’ time working as a Christmas elf at Macy’s department store in New York City. The SantaLand Diaries became a theatrical success in 1996 when it was adapted as a one-man, one-act play starring Timothy Olyphant.

As described in Wikipedia, “Much of Sedaris’ humor is ostensibly autobiographical and self-deprecating and often concerns his family life, his middle-class upbringing in the suburbs of Raleigh, North Carolina, his Greek heritage, homosexuality, jobs, education, drug use, and obsessive behaviors, and his life in France, London, and the English South Downs.”

In addition to his essays and books, Sedaris finds time to collaborate with his sister, actress and writer Amy Sedaris. The two have written several plays under the name “The Talent Family.” The plays include Stump the Host, Stitches, One Woman Shoe (which received an Obie Award), Incident at Cobbler’s Knob, and The Book of Liz (which was published as a book by Dramatists Play Service).

Sedaris lives in the Horsham District of West Sussex, England, with his boyfriend, artist and designer Hugh Hamrick, who is mentioned in a number of Sedaris’ stories. The couple appeared in the 2015 documentary, Do I Sound Gay?

Sedaris’ latest book, Theft By Finding, Diaries (1977-2002), was published in 2017. A forthcoming book of essays titled Calypso will be published in June.

This article is adapted from a feature originally published in the San Antonio Current. Additional reporting by James Courtney. The...