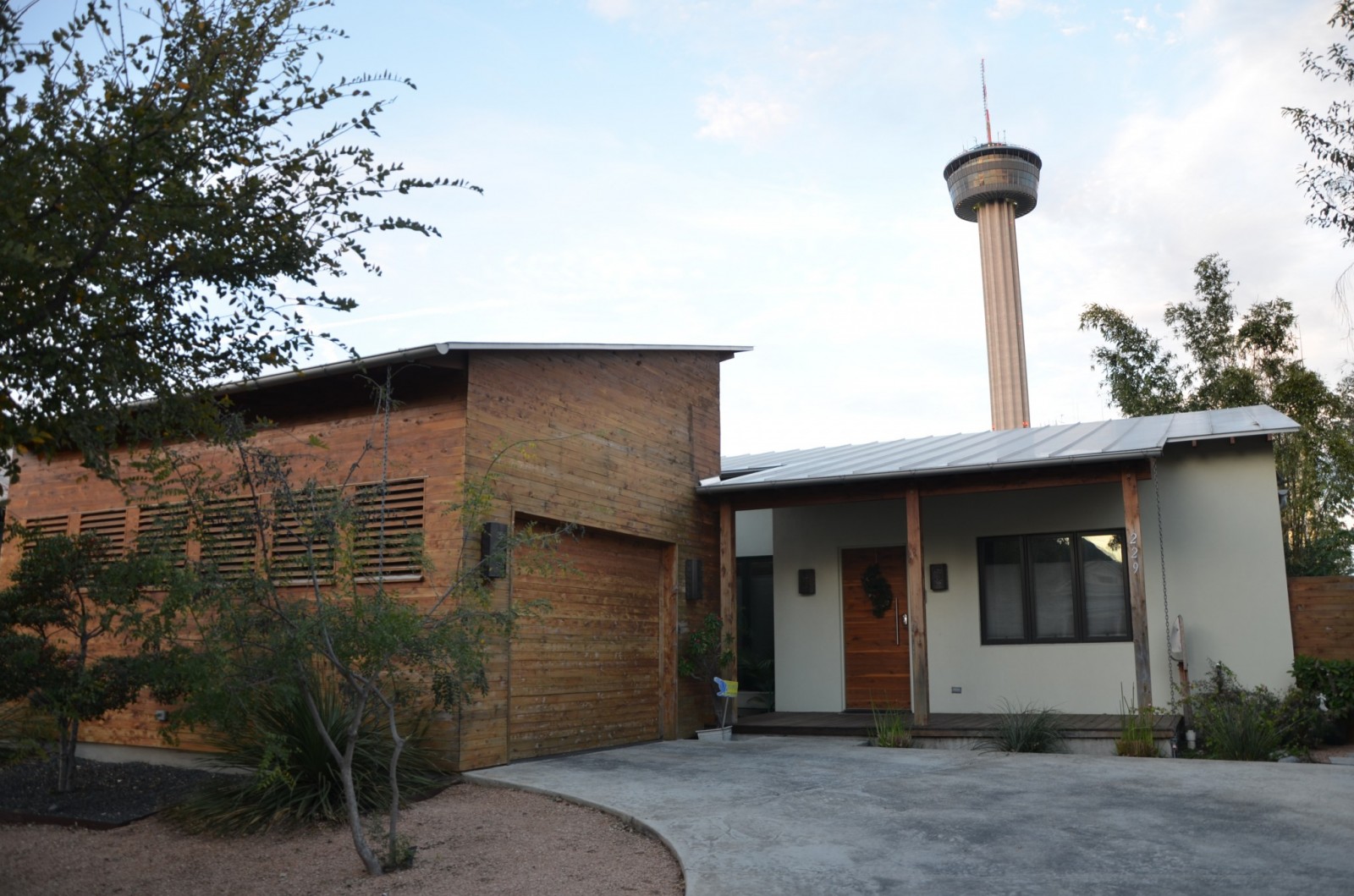 I hate to be the one to break this to you, but it’s too late for Lavaca.

I don’t mean this with doomsday references to a global-warming, tipping-point kind of scenario but rather in the you-shoulda-acted-sooner sense. Like Suzanne Martinez and Michael Berrier did nearly 30 years ago when they were still in student/student-teacher mode. Both are now established professors of political science (and co-owners, with Mike Looney, of La Tuna Icehouse), but a generation ago they could afford to tackle a stone cottage on Lavaca Street only thanks to one of the San Antonio Conservation Society’s first revolving restoration loans. Not really knowing what might lie ahead, they hired a stonemason and simply started.

“We’ve seen the housing stock change enormously,” says Martinez. “There were 3,000 people in (the now-demolished public housing project) Victoria Courts then; we called a place across the street our ‘crack house’ … but it was also really stable for a complicated neighborhood that included poor and working class owners and renters, lots of artists and waiters … They kept it viable.”

Martinez isn’t necessarily nostalgic for the crack-house days, but she does recall with fondness a time when the firehouse on South Alamo Street was still operational. (It’s scheduled to become an Italian restaurant if all goes as Feast’s Andrew Goodman hopes.) “The men were always there, playing basketball outside … they were [effectively] in charge of safety.” True, she says, the neighborhood is “more gentle on the eyes now.” But she also thinks that if the idea of urban living has become fashionable, some still don’t understand what that entails. “It doesn’t freak me out to see a single guy walking by on the street, yet you don’t leave your bike on the front porch,” she counsels. And with rumors of house sales approaching the million dollar mark (“with one right next door falling down”), she fears things may have gone from one extreme to another too quickly.

All of this has been fodder for architects with more than a little sense of adventure of their own, of course; several have made a commitment to build in the ‘hood, not just for clients but for themselves and partners as well. Lewis Fisher bought what some might consider a challenging, triangular lot near the old Courts a decade ago. Though an experienced professional whose firm just completed interior renovations of the Bexar County Courthouse, Fisher readily admits he “didn’t think it would take this long” to build an intended fourplex townhouse development that required multiple zoning interventions, revisions due to stringent code requirements, coping with utility easements, surviving the financial meltdown of 2008 and accepting the cooperation of three other architects (all from Alamo Architects) who eventually came along for the ride. Some uniform materials did emerge despite the fact that “we didn’t work together [on design] but just let everybody do their own thing,” he says of the project that ended up being two duplexes with a mere 3 inches between them at one point. Both smart and risky, the process apparently worked. 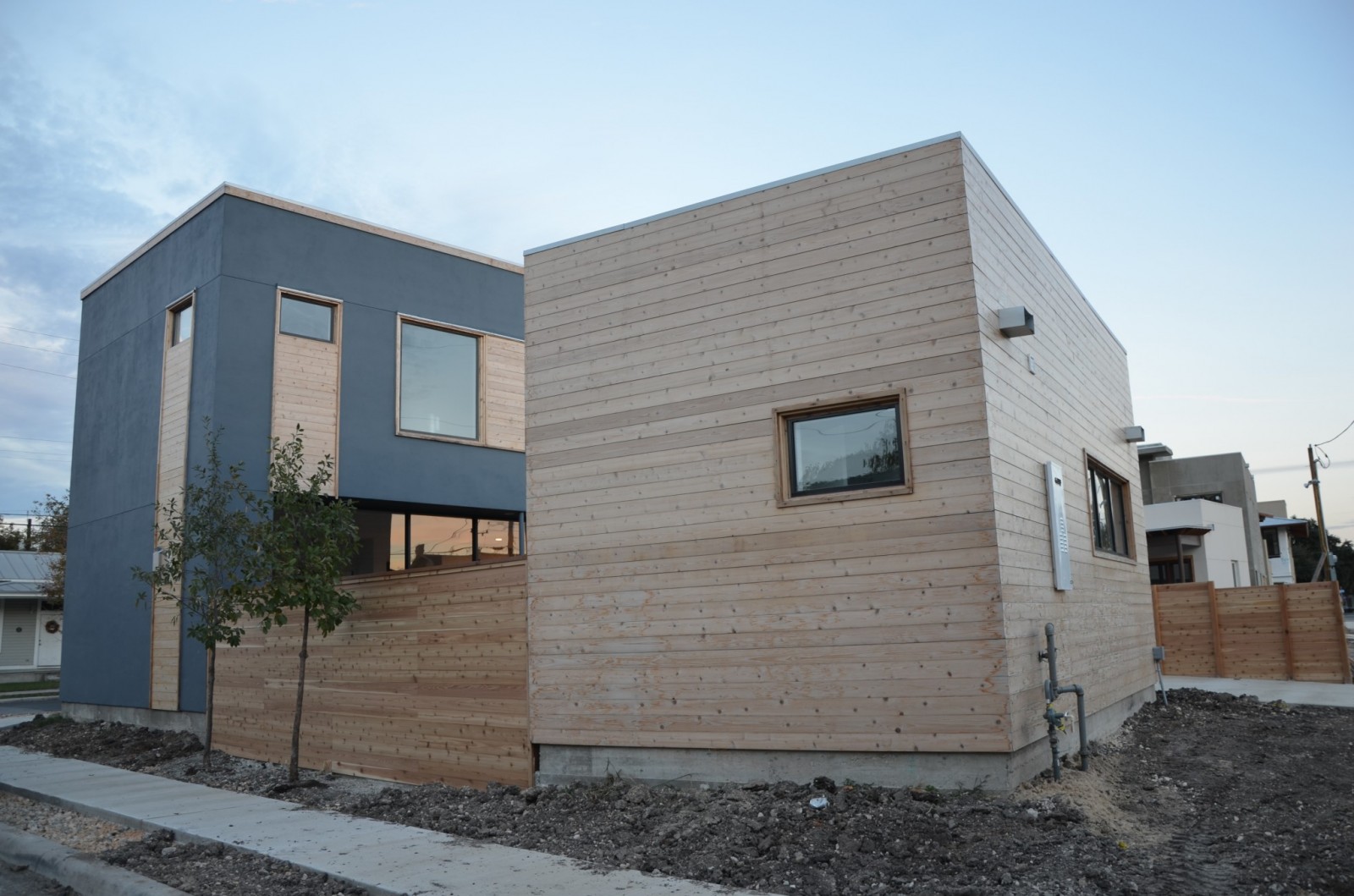 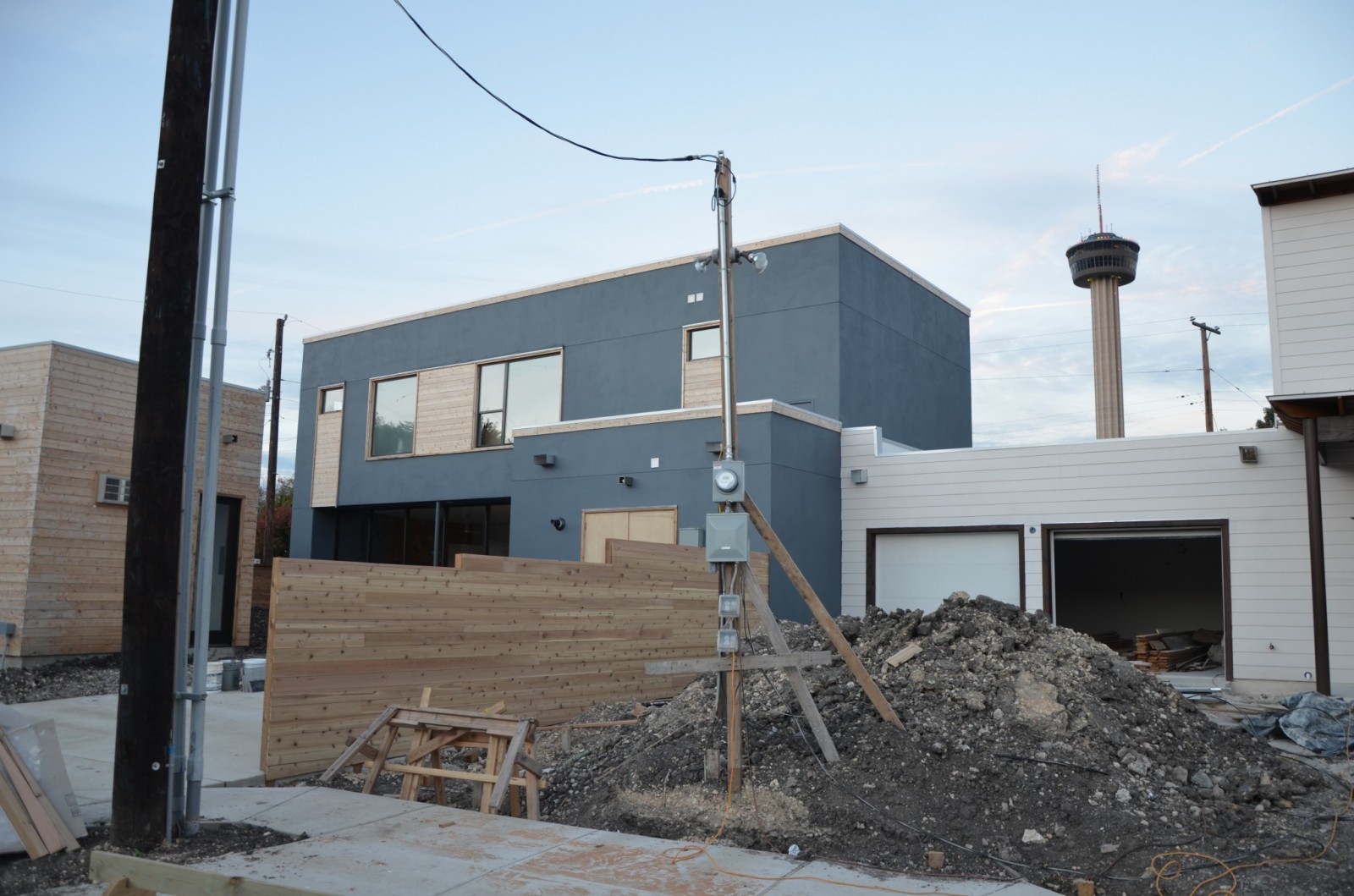 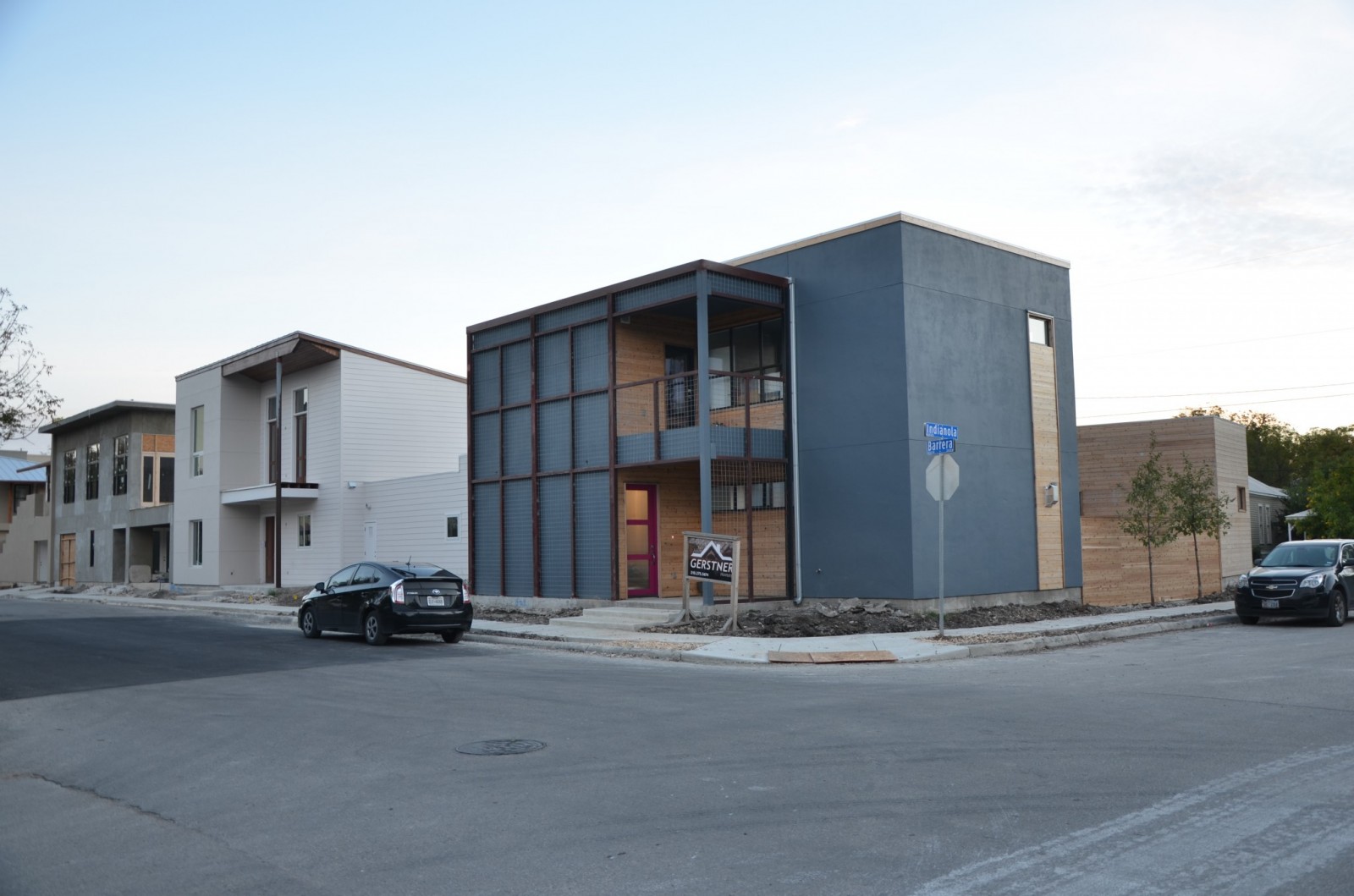 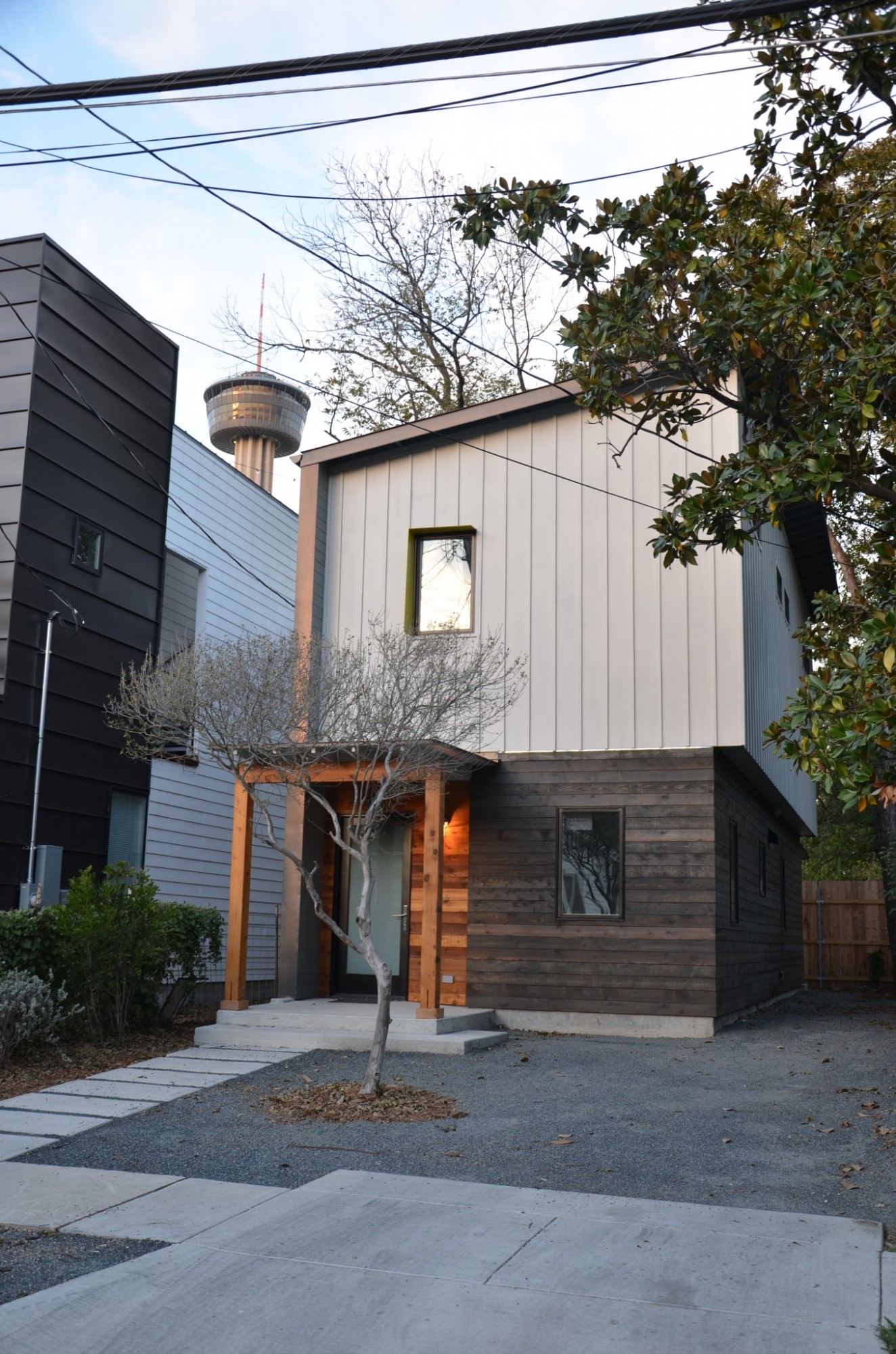 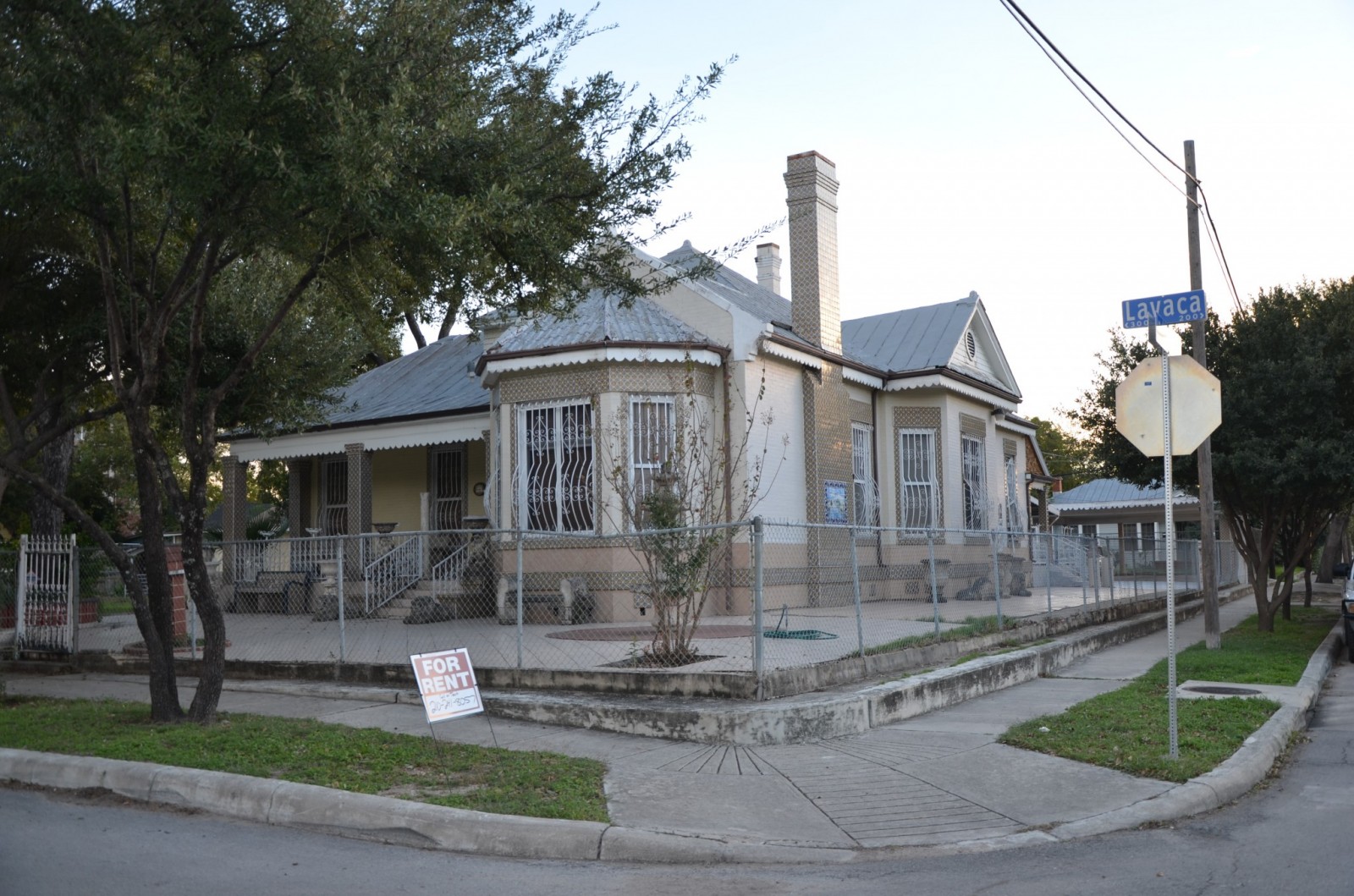 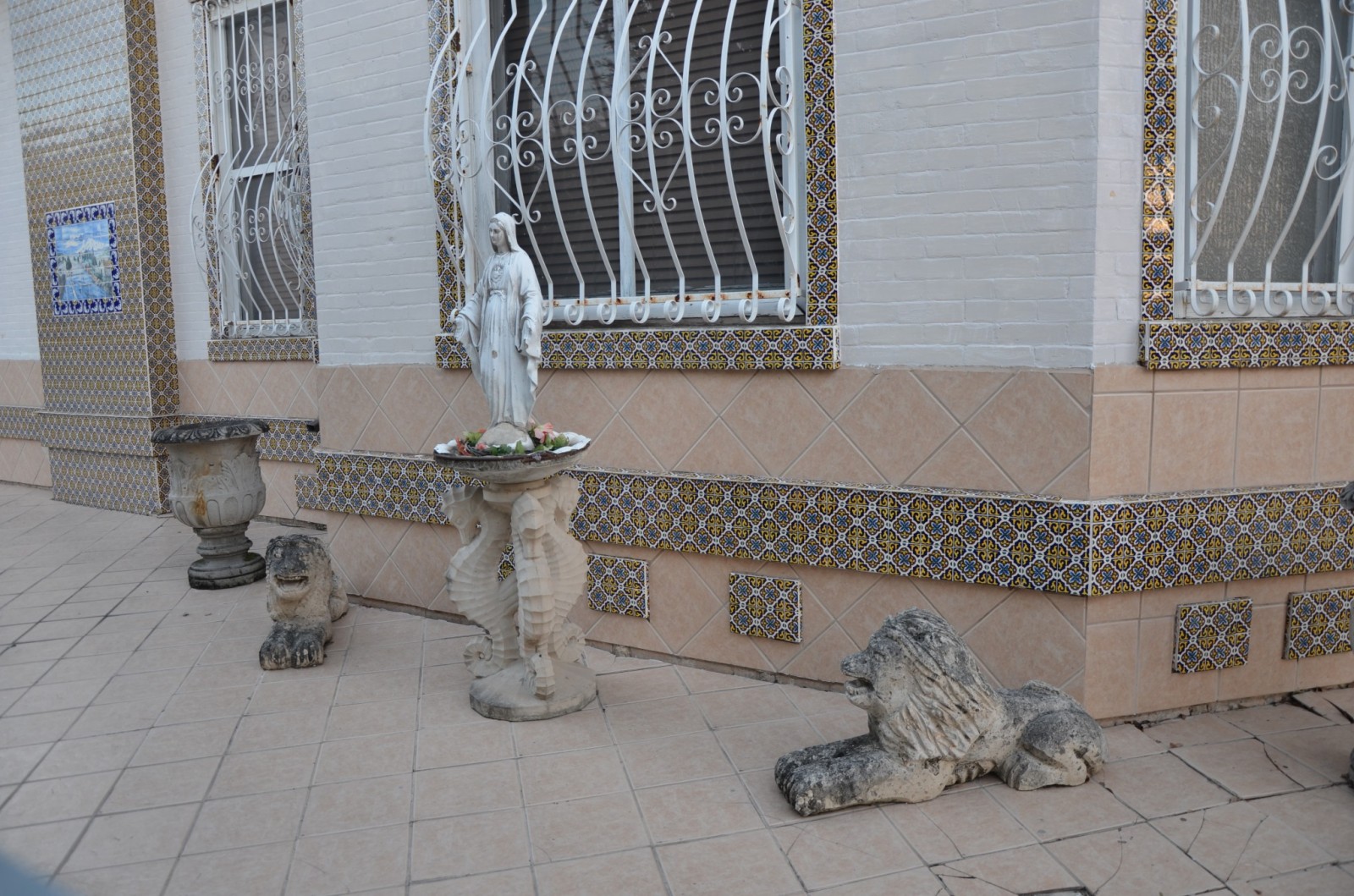 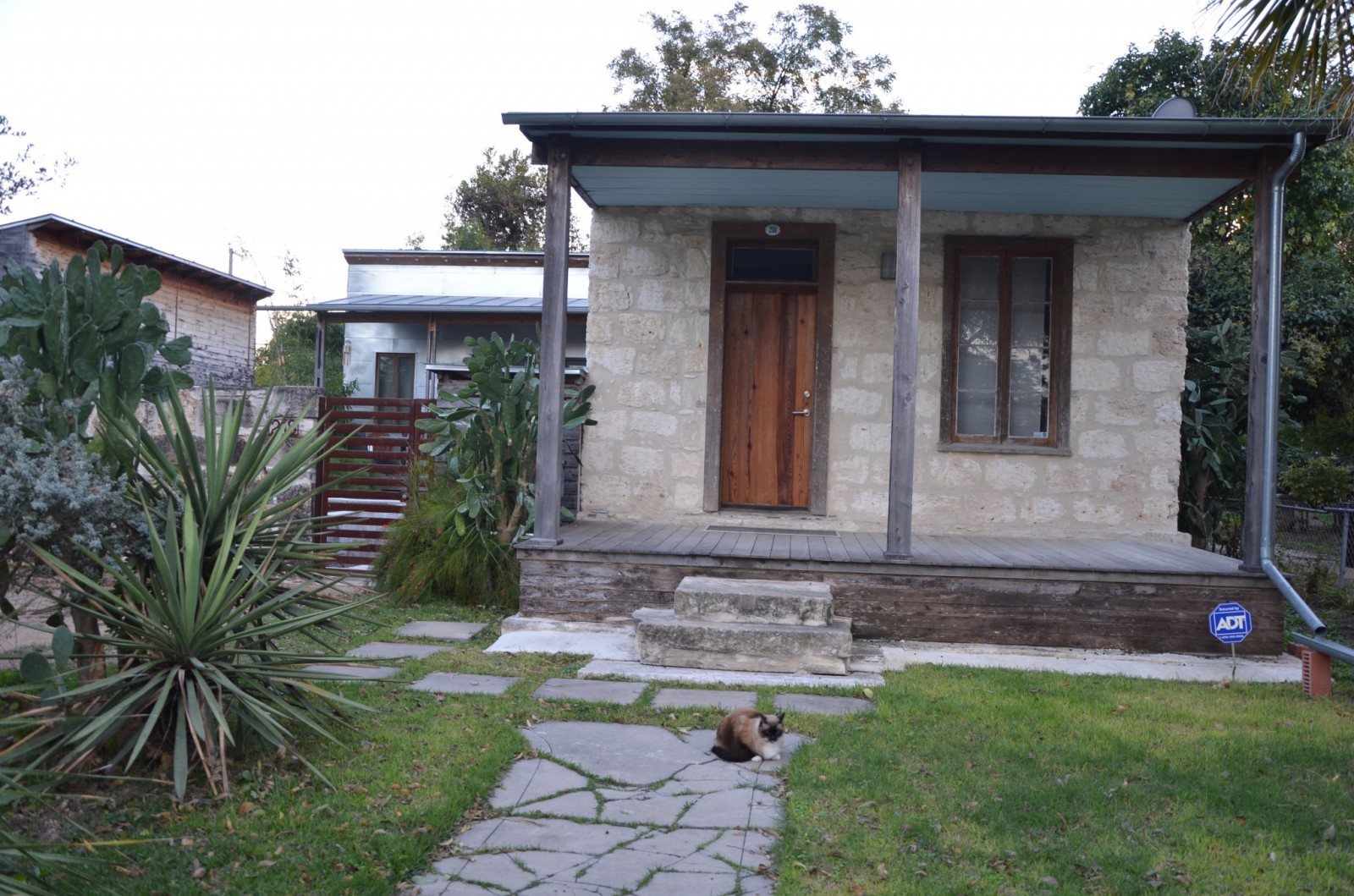 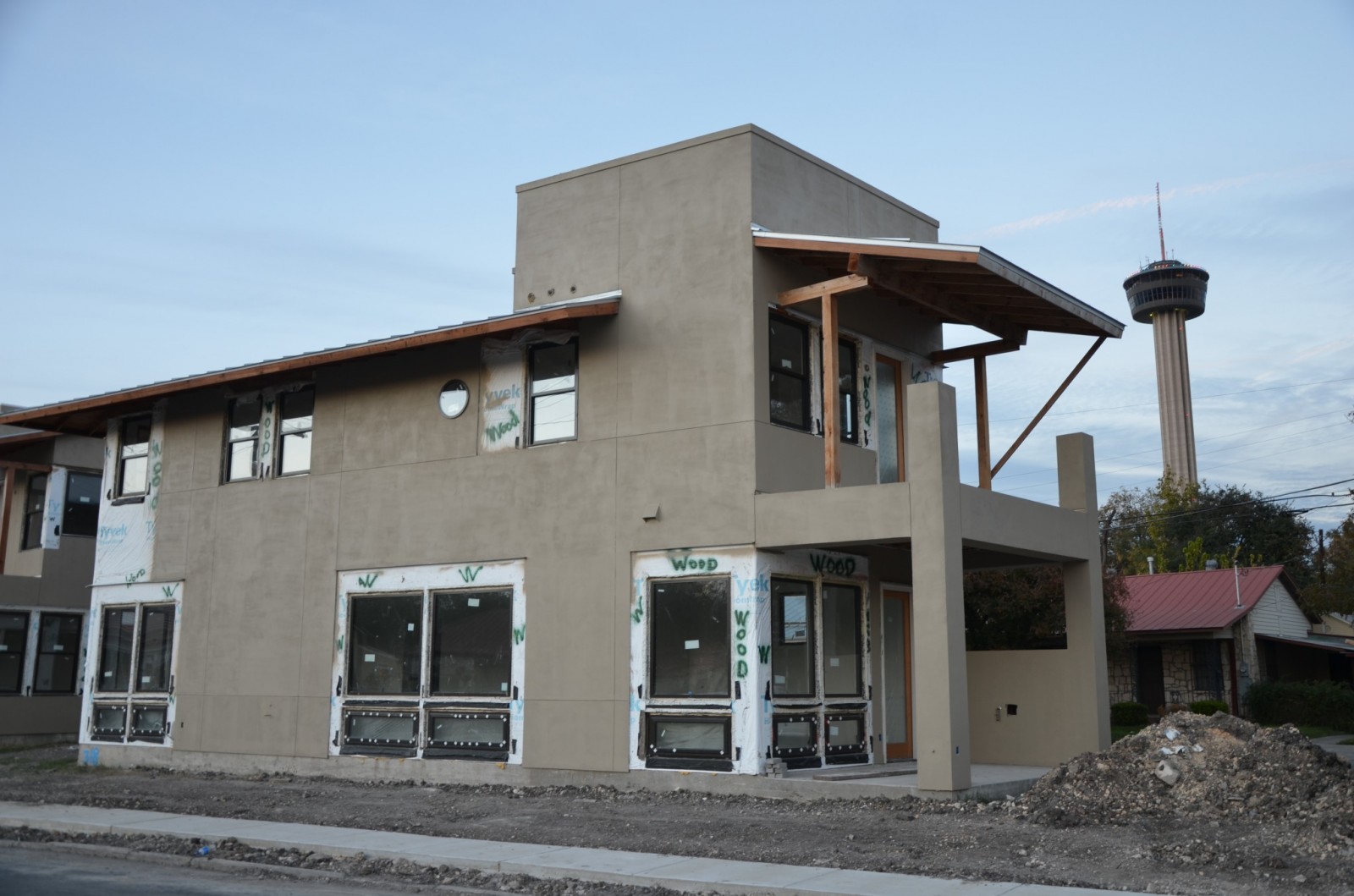 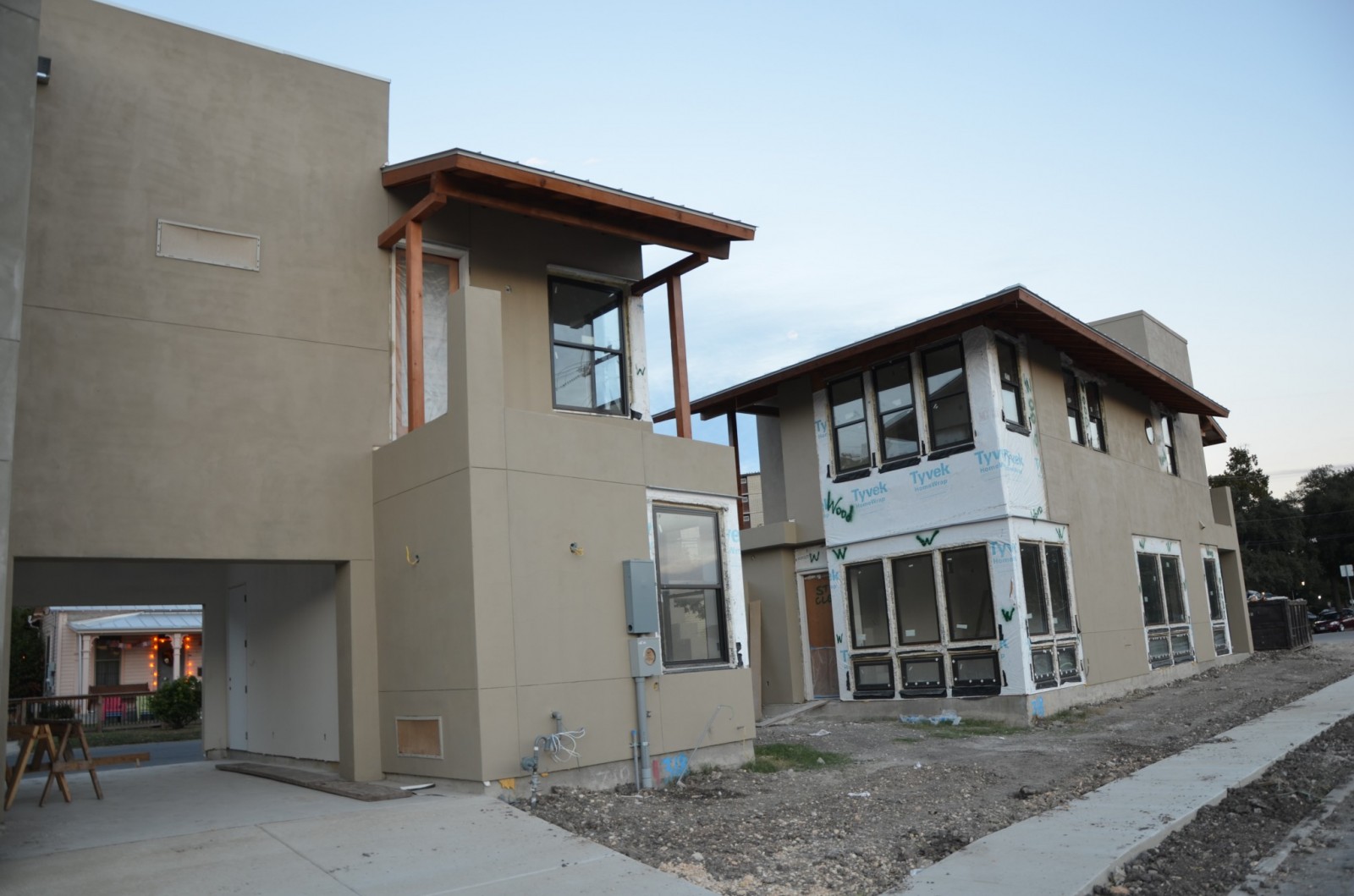 Fisher is not alone in calling architect and University of Texas at San Antonio professor Candid Rogers “the strong star over here” when it comes to sensitive restoration and development in Lavaca. Rogers — who designed the upscale restaurant Bliss in a former filling station on the neighborhood’s commercial edge — is responsible for the first contemporary residential project within the historic district, an area roughly bounded by East César E. Chávez Boulevard, Labor Street, Leigh Street, I-37 and South Presa Street. Within sight of Hemisfair Park, Rincón de Lavaca was developed as a three-house compound in 2004, with a fourth house added later. “I did my own house across the street in 2005,” says Rogers. It’s a meticulously reworked stone cottage, and the contrast between the two projects epitomizes what is now going on in Lavaca. He then tackled another historic cottage next door to his, and — with one commission leading to another — ended up with nine completed homes to his credit. “I keep trying to get out [of the neighborhood], but people keep pulling me back in,” he says.

The recent sale and subsequent development of 27 vacant lots on the site of the old housing project “will create a lot of new energy,” says Rogers — possibly a massive understatement. “We had 194 offers,” says Debbie Maltz, whose real estate firm helped the Housing Authority handle the transaction. With bid prices starting at $46,000 (five lots were set aside for “people of limited income”), several people “made multiple offers in the hope of getting one,” says Maltz. Speculation was discouraged by the stipulation that the purchaser had to agree to live there for two years — and possibly by the 18-page Leigh Street Design Guidelines document developed by Alamo Architects and Ann Benson McGlone, the city’s former preservation officer, in concert with the Lavaca Neighborhood Association and the San Antonio Housing Authority.

Though this project is just outside the boundaries of the historic district, historic patterns of street and structure, dating from the neighborhood’s beginnings in the mid-19th century and recognizing attributes of a range of styles from saltbox to Victorian to classic revival, helped inform the guidelines, which are “not intended to restrict creativity, but rather to define the common contextual design elements so that the entire development embodies the best practices of urban design.” Maltz considers them “pretty liberal” and thinks they will result in “a good mix.” A neighborhood that was already much edgier than any of the city’s other historic enclaves is apparently about to get even more so. For 27 buyers, maybe it’s not too late after all.

The City of San Antonio increased it's rank in the Human Rights Campaign's 2015 Municipal Equality Index. Now in it’s...