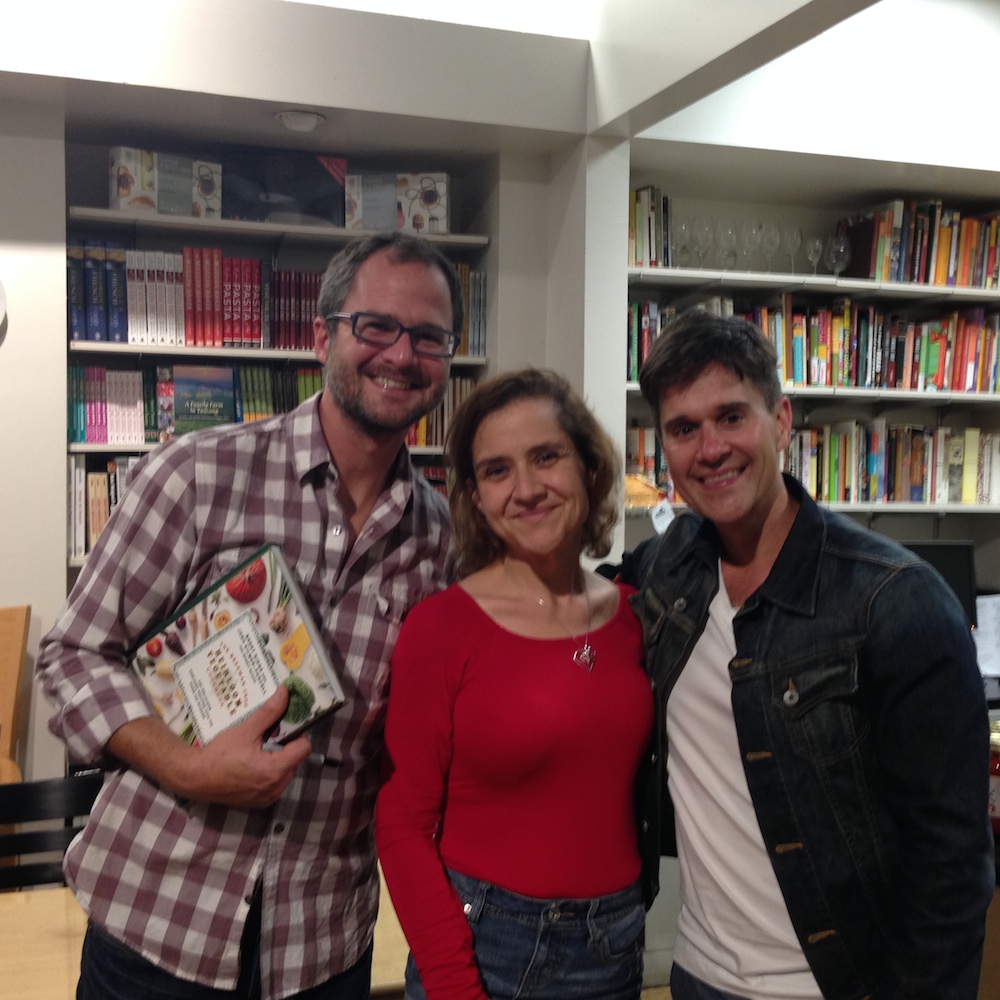 The Intimacy Doctor, center, with the fabulous Beekman boys.

I realize that I am the Out In SA sex columnist, not the food columnist. But since I adore food almost as much as I adore sex, I am also a regular attendee of events at the Central Market cooking school here in San Antonio. I got to hang out with the Beekman Boys this week, when they swung through on their Central Market Texas tour, and they were as much fun in person as they are on TV.

Also, the way to my heart is through my stomach, and the food was seriously amazing. So even if they had been heinous trolls, I would be their slave forever.

I first found the Beekman 1802 boys, Josh Kilmer-Purcell and Brent Ridge, when I picked up a copy of Josh’s second memoir, The Bucolic Plague, and loved it so much that I went trolling Netflix for their series, The Fabulous Beekman Boys. Wikipedia refers to the series as the “gay Green Acres.” I refer to it as “watching Josh cook and wishing I could hang out with him in his kitchen.” Clearly I’m not the only one impressed by their home-cooking chops, as they have published three cookbooks in the past three years.

They have since opened a Beekman 1802 mercantile shop, won the 21st season of The Amazing Race (paying off their mortgage in the process), and got married on the farm with Brent’s former boss, Martha  Stewart, in attendance last summer.

I’m feeling a little like an underachiever at this point.

Josh and Brent became involved with Central Market when CM opted to carry their Mortgage Lifter Pasta Sauce. They had originally envisioned the product as a means of paying off their mortgage. When their Amazing Race winnings took care of that, they decided to use the sauce to help other small American farmers instead. Twenty-five percent of the proceeds are now supporting other farmers each season, which is a fantastic thing. I picked up a jar of the spicy version after the class and can’t wait to try it.

So when their third cookbook, The Beekman 1802 Heirloom Vegetable Cookbook  (I got my copy signed in person; if you want a signed copy as well, you can order directly from their website by following the link above) came out, they partnered with CM to demo many of the recipes and share stories about the farm, Amazing Race, the reality series, and their wedding. My favorite piece of gossip? Martha Stewart brought hardboiled eggs and three types of salt to their wedding. This was everyone’s favorite dish, naturally, because MARTHA. Of course they were the best eggs ever!

As we are coming upon the holidays, they discussed many of the recipes from their latest cookbook and how to sneak them into your holiday food rotation without offending anyone by leaving out the family classics. I brought home some of my leftovers from the class, and my son has already voted to include the walnut cake at our family table. I’m sure this will be in addition to, not in replacement of, his treasured chess pie.

I love the idea of “heirloom” recipes … recipes that are cooked over and over again and are passed around families and down through generations. My son calls this “mom food.” The stuff that is comforting after a crappy day … the stuff that makes you feel HOME. I love that each page has room for notes on the recipes … I’ve been writing in my cookbooks for more than 20 years, so it’s fun to see my notes from that long ago. And I hope my kids will enjoy them, too, when my cookbooks end up in their hands. Instead of making home cooks scrawl in margins, this book gives the notes their own space, honoring them the way a fellow home cook would. This cookbook is replete with mom food–things you can fold seamlessly into your repertoire along with all your family classics.

Fellow Out In SA columnist Jackie Parsons wrote a hilarious article for the November issue called “Out For The Holidays” (coming to a shop/restaurant/bar near you November 19!). Since my favorite scenes on their reality series featured Josh and Brent navigating their first joint family Thanksgiving on the farm, I asked Brent for his best piece of advice to Out In SA readers for navigating a stressful holiday gathering. He suggests keeping it as drama-free as possible by focusing on what we love about each other rather than our differences, and honoring everyone’s traditions as much as possible. If one parent wants Stove Top stuffing, have it ready for them. Want to try out the walnut cake? Bring the chess pie as well (they both freeze beautifully, after all!). Making others feel welcome is one of the best gifts we can offer.

And if that doesn’t work? Buy them one of Josh and Brent’s cookbooks.

Follow Faith Harper, PhD, LPC-S, and message her your quandaries and questions (and recipes), @TheIntimacyDr. Or email: [email protected] Her column appears in each issue of Out In SA.