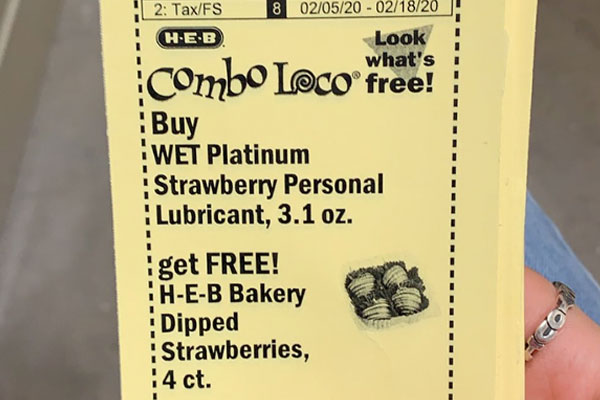 If you’re trying to have a sexy Valentine’s Day this year, H-E-B Grocery Co. is coming through.

A tweet from @miranda_renee3 shows a stack of coupons expected to hit the shelves at the SA-based grocery chain on Wednesday, February 5. The coupon grabbed the attention of Twitter users thanks to its booty call-ready offer of free chocolate-dipped strawberries from the bakery to anyone who buys a bottle of WET Platinum Strawberry lubricant.

As the tweet points out, “Nobody does it better than my H-E-B.”

What’s more, the coupon is valid through February 18, giving customers the option of celebrating Valentine’s more than a week early or keeping the vibe going for days after. At press time, H-E-B hasn’t confirmed whether the coupon is only available at select stores or all locations.

When the Metropolitan Community Church of San Antonio holds its annual Love’s Day Dinner and Dance on February 22, it...