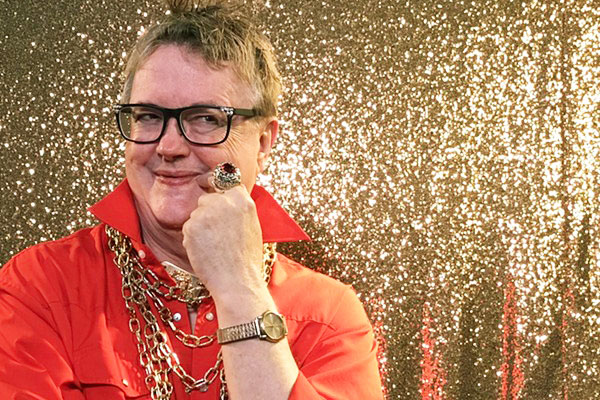 Squier originally created Gaylord Kaiser — “an aging drag queen with all that entails” — as part of Jump-Start’s 8×8 performance series, in which participants stage eight-minute performances inside of an eight-foot cube. Gaylord and his drag persona Dina Simone took on a life of their own, and Squier soon expanded his material into a full-length production. 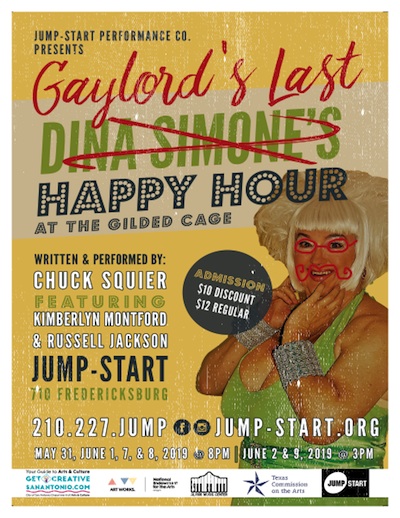 Forced to face the reality of “Growing Old While Gay” by an “alcohol-related mishap,” Gaylord decides to retire Dina and begin take the stage as himself instead. Behind the scenes, while Gaylord soaks up the spotlight, Johnny — Gaylord’s ex-lover, makeup-artist, pianist and bar-owner — and barback Petey, a shy Jersey girl, keep the Gilded Cage running smoothly.

Yet, as it turns out, Petey is secretly quite the songstress, and Gaylord takes her under his wing, becoming her self-appointed “Drag Momma” and pulling her out of her shell in what is essentially a gayer version of A Star Is Born.

Gaylord’s Last Happy Hour at the Gilded Cage stars Squier in the titular role with Russell Jackson as Johnny and Kimberlyn Montford as Petey.

Who Do You Want to Be Mayor? Early Voting Starts Today!