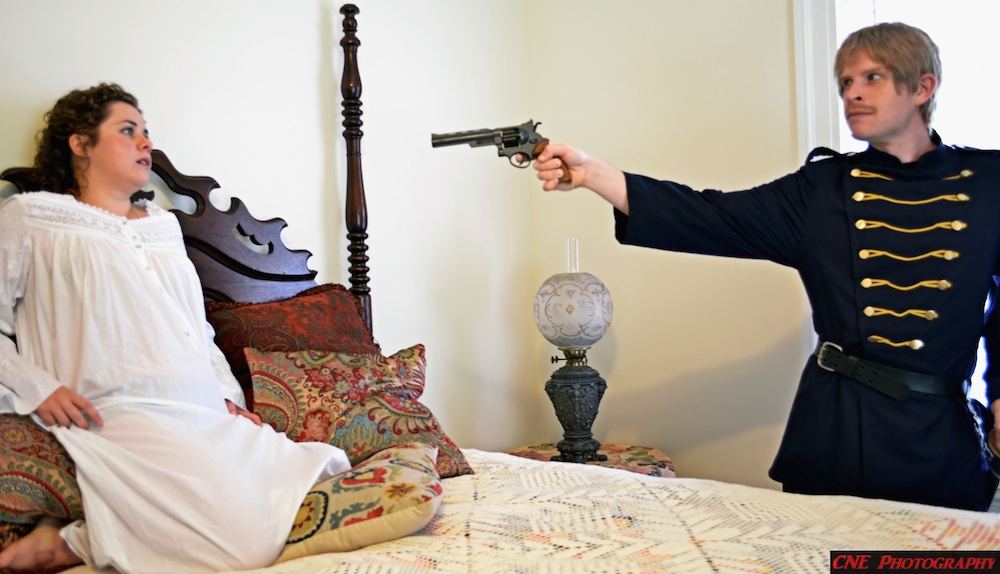 Date night at the Argyle. Er, no, sorry. The Classic Theatre's production of George Bernard Shaw's Arms and the Man.

While the quality of work in San Antonio’s theater community continues to improve, the lineup for the 2014-15 season is divided between the old and the new–and it’ll leave you happier than a two-peckered billy goat!

Which may or may not be a good thing; I’ll let you decide for yourself.

I want to point out to my tech-centric friends that San Antonio has a very large theater community. There are more than 30 companies in the surrounding area that offer theatrical productions for your viewing or acting pleasure. Only a handful of these companies have announced their complete upcoming seasons, so I’ll focus on our most influential and notable non-Equity(1) theaters: The Playhouse, Woodlawn Theatre, the Classic Theatre of San Antonio, and AtticRep.

Since Asia Ciaravino was appointed CEO of The Playhouse in 2012, she has made her mark as a community leader. Asked how she curates a season, Ciaravino said, “I do a lot of research. I really looked at what other cities were doing and saw their patterns and said, how can San Antonio push the envelope and also stay afloat?”

With the luxury of two performance spaces–the Russell Hill Rogers main stage and the Cellar black-box theater–Ciaravino is able to produce the classics that her audience has come to expect while taking some risks with lesser-known works. This year, the Russell Hill Rogers will feature perennial-favorite musicals such as The Wizard of Oz, Fiddler on the Roof, Gypsy and The Mystery of Edwin Drood, while adventurous audiences can find End of the Rainbow, The Last 5 Years, Crime and Punishment, 4000 Miles and Water by the Spoonful in the Cellar. Don’t be scared by a stage adaptation of Dostoevsky’s classic novel Crime and Punishment.  This 90-minute, three-person play is a tour-de-force that’s garnered many rave reviews since its 2006 premiere.

“I want to do shows that have a message that our community can connect to on many different levels. I don’t ever want a person to feel like we don’t offer something that connects to them,” Ciaravino said.

Up the road at the Woodlawn, artistic director Greg Hinojosa and his staff have just completed their first annual Deco Gala fundraising event, where they offered a sneak peak of the 2014-15 season. I caught up with Greg last week and came away with the message that he is continually looking to challenge his audiences, cast members and design staff by choosing shows that raise the bar artistically. The new season demonstrates this commitment by pairing cutting-edge musicals with proven crowd-pleasers: The Addams Family, La Cage Aux Folles, West Side Story, Peter Pan, and American Idiot. The latter being a stage adaption of the punk-rock band Green Day’s rock opera of the same name.  If the stars align properly, you might also see a familiar name announced as the director for the production, in the near future.

Don’t assume the Woodlawn is going to play it safe with any of these productions. Expect top-notch productions with extremely creative scenic designs and performances by some of San Antonio’s finest actors.

Next door to the Woodlawn is a handsome little black-box space where the Classic Theatre is settling in after six seasons at the former Jump-Start space in Blue Star. One of San Antonio’s most respected theater companies, the Classic is presenting a self-styled “World Tour” season showcasing an interesting range of authors, from William Shakespeare to Christopher Durang.

For many local actors, the Classic is where you go to see breathtakingly beautiful performances by some of the city’s best stage actors. They started off the season with George Bernard Shaw’s comedy Arms and the Man, and they’ll round it out with Ibsen’s Ghosts, Shakespeare’s Merchant of Venice (directed by yours truly), and Vania & Sonia & Masha + Spike by Christopher Durang.

Last and especially not least, save room on your personal playbill for AtticRep. Recently awarded the well-deserved honor of resident theater company for the new Tobin Center for the Performing Arts, AtticRep has had its finger on the pulse of theatrical art in this community for several years. Not afraid to produce risky shows that tackle oft-ignored subject matters, Artistic Director Roberto Prestigiacomo and Managing Director Rick Frederick decided to remind San Antonio how they earned their heavyweight title by staging four encores in their new studio theater: God of Carnage, Who’s Afraid of Virginia Woolf?, True West and The Irish Curse.

I was lucky enough to get a guided tour with Frederick of the Tobin’s new state-of-the-art Carlos Alvarez Studio Theater, and gentlefolk, we are in for one hell of a ride. Revisiting these productions, which were brilliant in their original AtticRep incarnations, will enable the troupe to push the artistic envelope and continue to inspire dialogue that informs and provokes change.

I asked Frederick if he is concerned they might be in for some backlash as the Tobin’s chosen theater emissary.

“We are not here to compete with other theater companies; we are here to inspire and collaborate with the wealth of talented theater artists that San Antonio has to offer,” Frederick replied. “By doing so together, San Antonio’s theater community might finally earn the respect it deserves.”

(Read Kareem Dahab’s interview with Prestigiacamo and actor Renee Garvens here, and look for a stunning photo spread in our premiere print issue, out November 19.)

As a working member of the community, I love the theater and I am extremely excited about the direction San Antonio theater is headed. The predominant impression I got from my recent conversations with these four companies is how much they want to work together, celebrate each other’s successes, and encourage each other to put up great work. Readers, I cannot tell you enough that you need to get off your couch or cellphone app and run–don’t walk–to a theater company near you. You will not regret what you see.

Matthew Byron Cassi is a an award-winning playwright, director and actor.  This season you can find him onstage all over San Antonio, as well as in the director’s chair for The Merchant of Venice at the Classic Theatre.

(1) non-Equity means that the performers are not part of the actors’ union, and the theaters where they perform not subject to minimum-pay and other professional requirements.

The residents at the San Antonio AIDS Foundation are there for skilled nursing care and still in many cases, hospice....