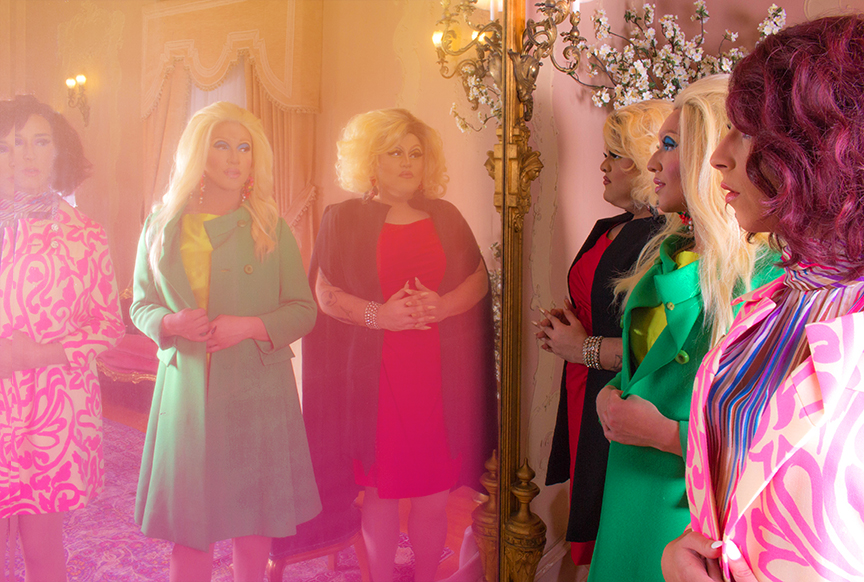 The Juniors photographed at the Woman’s Club of San Antonio by Julián P. Ledezma

I meet them as boys on an evening a week before Christmas, at Bakery Lorraine. Louie Canales, who performs as Chyna Cravens, and Christian Paolo, aka Sephwhora (pronounced Sef-whore-ah) 51, are waiting for me at a table near the entrance. The third member of the drag queen girl group known as The Juniors is running late — Aaron Tapia, who performs as Ariyah 51, was delayed at work.

What first strikes me about The Juniors, other than their youth, is their professionalism. All three are bright, funny and enthusiastic, unintimidated by the interview questions, gracious and polite. Listening back to the tape of the interview, hardly one obscenity is uttered, and their focus and mutual regard is absolute. One can see why San Antonio drag impresario Rey Lopez, of Rey Lopez Entertainment (RLE), put them together. As he tells me later, his RLE Showgirl stable includes all the major drag genres — comedy queens, pageant queens and, as he categorizes this trio, “theater artists.” All his showgirls are culled from “Drag Me to Fame” competitions at Heat Nightclub, which place winning performers in lineups headlined by RuPaul’s Drag Race stars — a touring innovation Lopez facilitates and promotes in San Antonio. The Juniors have gotten to meet Raven, Alyssa Edwards, Alaska, Bianca Del Rio, Sharon Needles — and other Drag Race alums who weren’t as nice.

But this makes it sound like The Juniors are a studio system act put together by algorithm in an age when drag is becoming commercially viable. Which, while true, couldn’t be further from the truth. Like drag itself, really. Because these boys, while trained, are nothing if not self-made.

Aaron has been involved in local San Antonio theater for 13 years — and he’s only 21. He started in a production at the Woodlawn Theatre called Annie Junior, was then cast in Cats, and was off to the races. Cannily, Aaron began to study into theater production as well, and has worked as a stage manager for numerous shows. Ideally, he would like to develop his talent in both directions; he’s got a strong managerial streak, and a sophisticated savvy about developing an audience. He’s deeply rooted in the San Antonio theater world and calls the Woodlawn his home, but would love to have a go at New York City. He came to develop Ariyah through his theater background. Out In SA’s Winter 2017 cover photographed by Julián P. Ledezma

Louie was the first of the three to perform in drag, participating in his first competition at The Saint just three months after graduating from high school. He already knew Aaron from the local theater scene, and from ushering under Aaron’s supervision for The Rocky Horror Show. They used to see each other at auditions. Aaron remembers what Louie was wearing the first time they met, auditioning in 2012 for the Woodlawn workshop production of Legally Blonde, where they first became friends. Louie, for his part, was impressed by Aaron’s audacity. “He would go to high school dressed as a boy, but with thigh-high boots on, and with black eyeliner and eyeshadow and his lipstick on, his face contoured and everything. I had never met anybody like that.”

Didn’t you catch hell at high school for that? I ask Aaron.

“No. I had a reputation for superiority, and everybody, the teachers, loved me. I was an influence on the entertainment aspect of our school, and people knew my mother, my sister. I carried myself with confidence, and I got along with people.” He could count on his allies, too, recounting how a girl stood up and defended him in class from a bully’s homophobic comments. Maybe his mom “wasn’t exactly thrilled” by his day-to-day attire, but she had his back.

Family togetherness is a common theme in our discussion. Louie recounts how his concerned father would ask, “Are Aaron’s parents okay with him dressing like that?” Louie’s own family turned out in force to that first competition at The Saint in 2013. “My aunt, my grandma, my cousins, my dad, my mom, my stepmom, my stepfather at the time …” He turns to Christian. “And you were there!” Christian nods. He knew Aaron from a theater camp at San Antonio College in the summer of 2011, when they were both cast in an unlikely sounding one-act play titled A Dog in the Manger and bonded over their love for Lady Gaga and drag queens. They kept in touch after camp, and “soon enough we were calling each other at 4:30 a.m. on Skype with our makeup on,” Christian says, “looking disgusting, but we would tell each other ‘yeah girl, you look good!’” All three Juniors collapse in laughter. Because this is really the classic drag queen education. All musical theater training aside, you must build the belief first.

By the time Christian got to camp, he’d already tasted both adversity and triumph. He’s got a half-serious self-deprecation about him. Of the teenage community theater days, he admits, “I went to auditions, but I was never cast in anything, or if I was, it was something like ‘a tree over there.’ I’m not a singer, and I’m really just a mediocre dancer.”

In 2010, Christian auditioned for director Omar Mills for a part in Sweeney Todd. Rather than being cast, Mills asked him to do stage makeup. “They needed me not just to do the stage makeup part, but to learn how to do fake blood and open wounds, things like that.” He ordered Christian to “get online, look it up, and make it happen.”

He goes on to say, “I blame it all on YouTube. YouTube made me a drag queen.” This is reflected in his drag name, Sephwhorah 51. Not only is the persona informed by YouTube tutorials, Christian now works as a professional makeup artist … for Sephora. When I ask The Juniors to characterize each other, this is what they say:

Aaron is organized, likes to manage details, order what needs to be ordered and set rehearsals.

Louie is conceptual, an idea person, tends to work out the choreography, and has an eye for the overall production, having worked as a director.

Christian is a font of oddball creativity, will get wild ideas like collapsing into his first-ever “death drop” mid-live gig, and is the composer/sound artist of the trio, with the ability to hear a song the group likes, say “give me a minute,” and execute a deft, performance-friendly mix.

They explain that when performing together, they tend to do a musical number, and a comedy number. Speaking of … They have a holiday-themed show at the Heat a few nights hence, and it’s taken the combined talents of all three to put together a musical number — the infamous Mean Girls rendition of “Jingle Bell Rock.”

The next time I see them it’s December 21, and the Heat is packed with beauties, with a line well out the door. Most clubbers are young or youngish, though not all are LGBT, and there’s a friendly, if slightly bitchy, sense of holiday camaraderie and merriment. Lots of laughing, so much good hair, so many good outfits. I mill around, feeling old and grateful. Old because the crowd looks to be a sea of millennials, and I’m 45 … grateful because back when I was in my early 20s, the boys I knew who did drag did it in fear. Even the ones who became good, started scared. After an hour or so, The Juniors take the stage for their 10:30 p.m. slot. I jostle as politely as I can to get a view, but it isn’t easy.

Aaron, Louie and Christian are nowhere to be seen. But Ariyah 51, Chyna Cravens and Sephwhorah 51 are decked out as tucked-in, showgirl-sleek, be-hatted Santa bebés, taking the tiny, spotlit stage to whoops, catcalls and general delight of several hundred closely packed fans. Ariyah is the most ingenue-like, Chyna the blondest/vampiest, and Sephwhorah has the most elaborate eye makeup. As the “Jingle Bell Rock” recording begins and the capacity audience giggles, shuffles around and begins to hush, The Juniors take it away with expertly cutesy, well-rehearsed choreography. They are put-together but not homogenized, coordinated but not entirely seamless. Chyna’s glamour shines light on Ariyah’s sweetness, which supports Sephwhorah’s comedienne chops; individually talented, as a group they are show-stoppingly adorable.

Just as the first verse concludes, there’s a bit of slapstick, and this is where the theater training kicks in. Chyna and Ariyah collide mid-step, and Chyna, in full-on Mean Girls mode, shoves Ariyah backwards, where she jostles the PA. Immediately, the “Jingle Bell Rock” recording malfunctions, judders, skips, and cuts out with an exaggerated pop. The speakers go dead. The girls startle. They gasp, wing their hands over their mouths, turn to each other, shake their heads.

This could have gone so wrong, y’all. Fake catastrophe, overplayed, is a cheesefest turned snoozefest in short order, as anyone who has ever sat through a second-rate staging of Noises Off can tell you. But after a perfect beat, The Juniors go all secret-weapon on our asses, turning from lip-sync to live belting with “What a bright time, it’s the right time …” and before they can get to “rock the night away,” the whole room is singing — and I mean singing, along. It’s maybe the most spirited holiday sing-along I’ve heard since the late ’70s. Which is exactly what they wanted. I mean, I assume it is. Anyway, I can’t sing along properly, because I’m crying like a Dance Mom.

Originally published in the San Antonio Current. Imelda Arismendez sits on a ladder, molding adobe with her bare hands. Her...