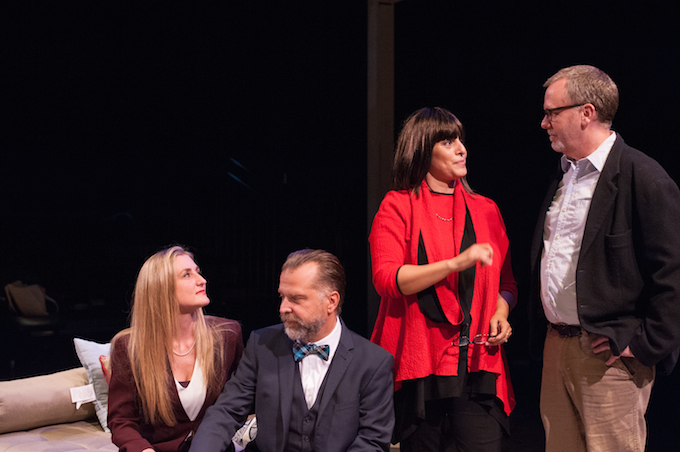 San Antonio opened the Tobin Center for the Performing Arts this fall inside the bones of the old San Antonio Municipal Auditorium. The grand H-E-B performance hall, with its retractable seats and towering balconies, may be the talk of the town, but the adjacent Carlos Alvarez Studio Theater is now the residence of the AtticRep performance group, a troupe well-known for artistically demanding theater since 2005. They debuted at the Tobin in September with an all-queer cast  for God of Carnage, Yasmina Reza’s story of a playground fight that spills over into the button-down lives of the kids’ middle-class parents. Director Roberto Prestigiacomo and actress Renee Garvens spoke with Out In SA about the play and AtticRep’s new role in the San Antonio theater community.

Renee: There is a lot of physicality in this piece. The parents turn into children themselves. They crack open a bottle of rum and then all hell breaks loose. We actually went to Hotel Havana’s Bar Ocho, and we all ordered a glass of straight rum and shared it, because that’s the way the characters drink it onstage. I could really understand how they get drunk so fast.

I would love to see more theater be done where the story is not about being LGBT. That the story is just about people living lives, and they just happen to be same-sex couples. This play is about two couples who both have sons who created this altercation. It would not matter if my partner in the play was Gloria [Sanchez], and Andy [Thornton] and Rick [Frederick] were a couple.

Roberto: We select the people because they want to work with us. They trust AtticRep to do the work they want to do, and of course because of the diversity of the kind of work that we do. We’ve done plays on sexual assault, the right to get married regardless of gender–I mean all of these topics that we have done are real social matters of significance and have attracted people who are connected with these topics. I think that’s the strength of our company.

Renee: I think the people who get involved with AtticRep, and who stay involved with AtticRep, are people who really love the creative process. The performance is important to us, don’t get me wrong. How the play turns out and how the audience perceives it is incredibly important, too, but our focus is and always has been on the process–the deconstruction of a piece of theater, and how we put it back together while adding our own voice.

Roberto: We do hope to contribute to the growth of the theatrical landscape in San Antonio. The community has grown so much. I think it has potential to grow even more, especially if theaters like AtticRep work to try to keep the talent in town. So many wonderful actors go away. We want to keep them here. If we lose all this talent, it’ll be a great challenge for us without good actors and good designers. We feel the great responsibility in San Antonio. And we’re very grateful.

Renee: We’re trying to keep grounded in the art and not get caught up in the sense of pressure of being in the Tobin. We’ll keep doing what we’ve always done. We’re known for putting on high-quality, thought-provoking work. We’re also trying to appeal to an audience we’ve never had before.

The not-so-mysterious rituals of gay parenthood