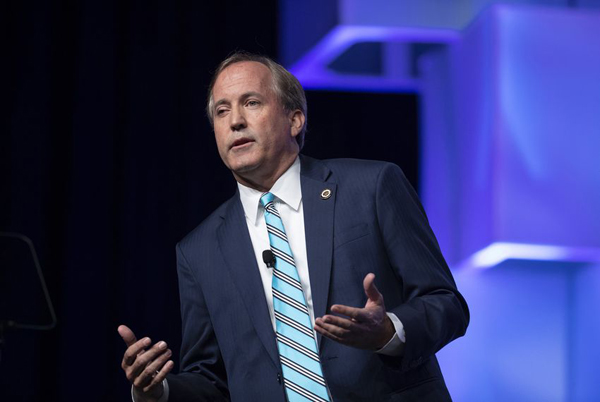 Attorney General Ken Paxton has run as a defender of religious liberty. (Photo: Bob Daemmrich for The Texas Tribune)

The attorney general’s office is charged with defending state agencies when they are challenged in court. But Paxton will not defend a commission sued after it issued a public warning for a Waco judge who refuses to perform same-sex marriages.

Texas Attorney General Ken Paxton will not defend a state agency being sued for its decision to sanction a Waco judge who refuses to perform same-sex marriages.

Dianne Hensley, a justice of the peace who officiates marriages between men and women but refuses to perform marriages for same-sex couples, received a public warning late last year from the State Commission on Judicial Conduct, a small agency charged with disciplining Texas judges. Weeks later, Hensley sued the agency in McLennan County District Court, claiming it violated state law by punishing her for actions she took in accordance with her religious beliefs.

Marc Rylander, Paxton’s communications director, said the commission “is an independent agency authorized to represent itself in legal proceedings, which it typically does.” Recent court records show the agency is sometimes defended by its own attorneys, and in other cases defended by staff of the attorney general’s office. The agency routinely represents itself before “special courts of review,” when its decisions about judges’ sanctions are appealed, but Eric Vinson, the former executive director of the agency, said to his knowledge the attorney general has never declined a request to represent the agency when it is sued in a district court.

“We believe judges retain their right to religious liberty when they take the bench,” Rylander added.

The Houston Chronicle first reported the news on Wednesday.

Paxton, who has run as a champion for religious liberty, issued a non-binding legal opinion in 2015 stating that religious clerks and public officials could opt out of issuing such licenses — but they should be prepared to face fines or legal challenges.

Neither Rylander nor the commission’s leadership would say whether Paxton had explicitly refused to represent the agency. But the attorney general is expected to defend state agencies and state laws challenged in court.

Little action has been taken so far in the case, court records show. Just one filing has been submitted on behalf of the state agency, and it was signed by Jacqueline Habersham, the commission’s interim executive director. That legal document — a request to transfer the case from McLennan County to the commission’s home in Travis County — identifies her as “counsel for defendants,” but she did not return requests for comment about whether she alone will continue to represent the agency.

If the agency wants to hire outside attorneys, which can come at a steep cost to the state, it will need approval from the attorney general’s office. But it’s not clear whether the commission needs explicit approval from Paxton’s office to represent itself.

According to Steve Fischer, one member of the judicial conduct commission, Paxton’s office made it clear to the agency from the start that it would not represent it in the legal fight, citing a conflict of interest because Jeff Mateer, Paxton’s top aide, had worked at the First Liberty Institute.

Habersham declined to comment, and the attorney general’s office did not respond to questions about the decision.

Fischer said he was uncomfortable with the entire process.

“The attorney general should represent the commission regardless of his personal beliefs or his mood for the day. His switching back and forth is totally unprofessional,” Fischer said, emphasizing he spoke only for himself.

Paxton declined to defend a different state agency, the Texas Ethics Commission, in a lawsuit filed years ago by Empower Texans, a hardline conservative group that has been an important political ally to him. And he has opted not to defend state laws, like the Texas Advance Directives Act, when they conflict with his interpretation of the Constitution.

Hensley is represented in the case by the First Liberty Institute, a high-profile Plano-based religious liberty law firm with deep ties to Paxton’s office that reach back to the earliest days of his political career. Hensley’s lawyer, Jonathan Mitchell, is a former solicitor general of Texas. And Paxton and the First Liberty Institute have often been allies in religious liberty fights in Texas, collaborating on a lawsuit against the city of San Antonio after it banned Chick-fil-A from opening a location in its airport. Mateer, now the first assistant attorney general, worked as the firm’s general counsel before joining the attorney general’s office.

Kelly Shackelford, the group’s president and CEO, has endorsed Paxton and contributed to a legal defense fund Paxton has used to fight off a four-year-old criminal indictment for securities fraud.

Ricardo Martinez, CEO of the LGBTQ advocacy group Equality Texas, said “judges and clerks should do their job, follow the law, and issue marriage licenses without discrimination.”

“Likewise, Ken Paxton should do his job, follow the law and defend state agencies’ ability to [rein] in rogue judges who are choosing to defy the law despite their oath to serve all Texans,” he said.

The Hensley case generated controversy even before she took it to court. Two former members of the judicial conduct commission claimed that Gov. Greg Abbott ousted them from the agency after they indicated they would vote to issue a warning to Hensley.

“What the governor’s doing is wrong,” Amy Suhl, one of the former commissioners, told The Texas Tribune last month. “They’re not supposed to be trying to coerce people to vote a certain way. It’s just not right.”

At the time, an Abbott spokesman said only that the governor’s appointment decisions are “based solely on merit.”