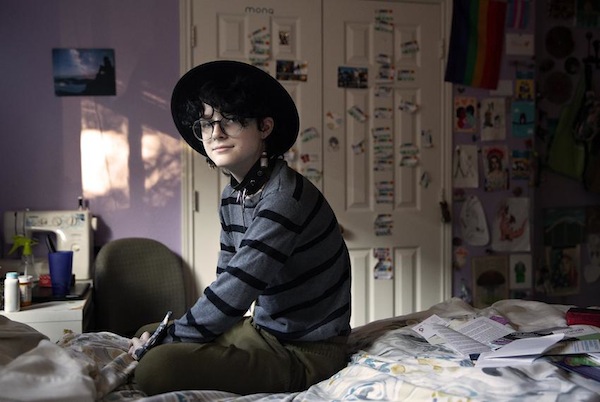 Atticus Sandlin, 16, works to provide support and empowerment to LGBTQ youth in Dallas. He takes part in youth-led sex education at his school and throughout Texas with Youth First. (Photo: Shelby Tauber for The Texas Tribune)

The Republican-dominated State Board of Education is taking up the first revision of sex ed curriculum in more than 20 years. LGBTQ students say they’re being excluded again.

By the age of 16, Atticus Sandlin has become a sex education expert.

As a student at Hebron High School in Lewisville Independent School District, in the suburbs of Dallas, he built what he calls a “sex ed mini career,” educating himself through internet research, conferences and advocacy groups — then turning around and educating his peers.

Last school year, he says, students would find him in the halls to ask questions like, “What is a hymen?” or “Does this count as sex?” He handed out condoms, pamphlets and dental dams to anyone who asked, and highlighted the importance of respecting other people’s boundaries. He even taught sexual education classes specifically for LGBTQ students through Youth First, a program in North Texas for queer teens.

Texas does not require public schools to teach LGBTQ issues in sex education, an omission that frustrates Sandlin, who is bisexual and a transgender boy. “There are some queer people who don’t do their own research, and they don’t get information from school or any resources,” said Sandlin, now a high school junior at public iSchool Virtual Academy of Texas. “It’s important that they get that information even when they don’t have access to it or it’s not safe for them to get access anywhere else.”

This week, the Texas State Board of Education, which determines what millions of public school students learn, is expected to approve new standards outlining how schools should teach health and sexual education — the first revisions to that statewide policy since 1997. At an initial public hearing this June, many students, teachers and advocates asked the board to require that students learn about sexual orientation and gender identity, especially since LGBTQ students are more likely to be discriminated against and bullied.

One study conducted by the Williams Institute at UCLA School of Law estimates that as many as 158,500 LGBT youth live in Texas, about 2% of the state’s youth population.

But the final proposal, set for debate and a preliminary vote this week with final approval expected in November, still excludes any direct mention of LGBTQ issues.

Over the last several years, Texas Republican leaders have targeted LGBTQ rights and protections. In 2017, they unsuccessfully pushed a policy preventing transgender people from using public bathrooms that match their gender identity, and last year they encouraged an investigation into whether a mother supporting her child’s gender transition was committing “child abuse.”

At its June hearing on the new policy, the 15-member elected education board — 10 Republicans and 5 Democrats — split down partisan lines, with Democrats pushing for explicit inclusion of sexual orientation and gender identity and Republicans largely opposed.

“There likely will not be consensus on this,” said Keven Ellis, a Lufkin Republican, who chairs the board, at the June meeting. He told The Texas Tribune in an e-mail that he supported teaching about “different types of bullying, including bullying for sexual reasons.”

Schools are not required to teach sexual education, but those that do must stress abstinence as the preferred choice for unmarried young people and spend more time on it than any other sexual behavior. Parents can opt their children out of any lesson they want.

Dee Lepine, a 17-year-old senior at Timber Creek High School in Keller ISD, remembers eighth grade health teachers showing students pictures of people with sexually transmitted diseases and telling them not to have sex. That was the last health class Lepine, who is nonbinary and uses gender-neutral pronouns, took. There was no mention in the class of sexual orientation or gender identity.

“I think just knowing that having attractions when you’re a teenager is normal and you shouldn’t scare kids with scary images,” Lepine said. “It’s really important that they don’t feel like, you know, a freak, because everyone deals with it.”

Lepine remembers learning the details of sex education from the media and friends, who were similarly uneducated and confused.

Atticus Sandlin has a variety of pamphlets, stickers, types of contraception and informational resources to provide to anyone who needs them. 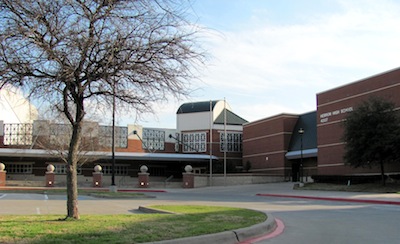 Sandlin can clearly remember one of the most uncomfortable assignments he received in a public school sexual education class. Each eighth grade student was given a cup with liquid and told to pour it back and forth among other students’ cups.

“At the end of it, they put drops in all of our cups. If your cup turned purple, you had a [sexually transmitted infection],” said Sandlin. “I just remember it being awkward. I was like, are they really trying to get us to simulate sex?”

And most important, the educator at the front of the classroom didn’t include very many lessons that would apply to LGBTQ teens. Sandlin sat in the class with a few friends taking notice of the gaps in the lessons, like the statement that all sex risks pregnancy, which is untrue for many queer people.

In high school, whenever Sandlin realized a class had a substitute teacher, he would run to the front of the room to explain his chosen name and pronouns, which differ from the name and gender he was given at birth. Some teachers made a point of ignoring his requests — an indication, he believes, that comprehensive health education classes would be just as useful for those outside of the queer community.

“Pretty much every queer person I know has experienced some level of bullying or just plain ignorance,” he said. “One time, I had a teacher straight up say, ‘I’m not going to call you that.'” As he’s gotten more confident, Sandlin has reported such incidents to counselors, but said it’s scary to go up against a teacher.

The State Board of Education debated the importance of adding gender identity and sexual orientation into the standards in June, and a few Republicans suggested strengthening the lessons around bullying, making it clear that students know that they should respect everyone. But they largely opposed making direct references to LGBTQ students.

“If we start delineating things, we need to go back and make sure we include everybody else,” said Ken Mercer, a San Antonio Republican on the board.

“If we can save a life because we include this and we allow these students to find that there is no shame in their gender identity, isn’t it worth it to you? It’s worth it to me,” said Ruben Cortez, a Brownsville Democrat on the board. “Hearing and knowing of teens that have [killed themselves] … because of some of the things they deal with, if we in Texas have the opportunity to correct some of this and save one life, I think it’s worth it.”

Georgina Pérez, an El Paso Democrat on the board, said including LGBTQ students in the health standards would parallel work the board has already done creating standards for Mexican American and African American studies courses over the last couple of years. “LGBTQI is an identity, an identity that’s not reflected in any of our curriculum,” she said.

“Racism is a lot bigger problem than the sexual thing as far as people being picked on for different things,” responded Pat Hardy, a Fort Worth Republican on the board.

The state sets minimum standards for what should be taught, but districts are allowed to include additional topics they feel would benefit their students. Some districts, including Austin ISD and Fort Worth ISD, have adjusted their own health and sex education policies to include lessons on gender identity and sexual orientation.

Conservative groups such as Texas Values have headed the fight against these policies, considering them pro-LGBT “indoctrination” and urging parents to opt their children out of sexuality courses. Left-leaning advocacy groups such as Texas Freedom Network, Planned Parenthood and the Texas Campaign to Prevent Teen Pregnancy have pushed in the other direction.

Sock Trimarco, who is “queer in most senses of the word” and uses gender-neutral pronouns, has taken sex ed workshops through Planned Parenthood after learning abstinence-only sex education in the online public school Texas Connections Academy.

Sex education that includes LGBTQ students benefits everyone, they said. “To teach people not only that it’s OK to be you, but it’s also OK for other people to be queer.”

Disclosure: Texas Freedom Network and Planned Parenthood have been financial supporters of The Texas Tribune, a nonprofit, nonpartisan news organization that is funded in part by donations from members, foundations and corporate sponsors. Financial supporters play no role in the Tribune’s journalism. Find a complete list of them here.