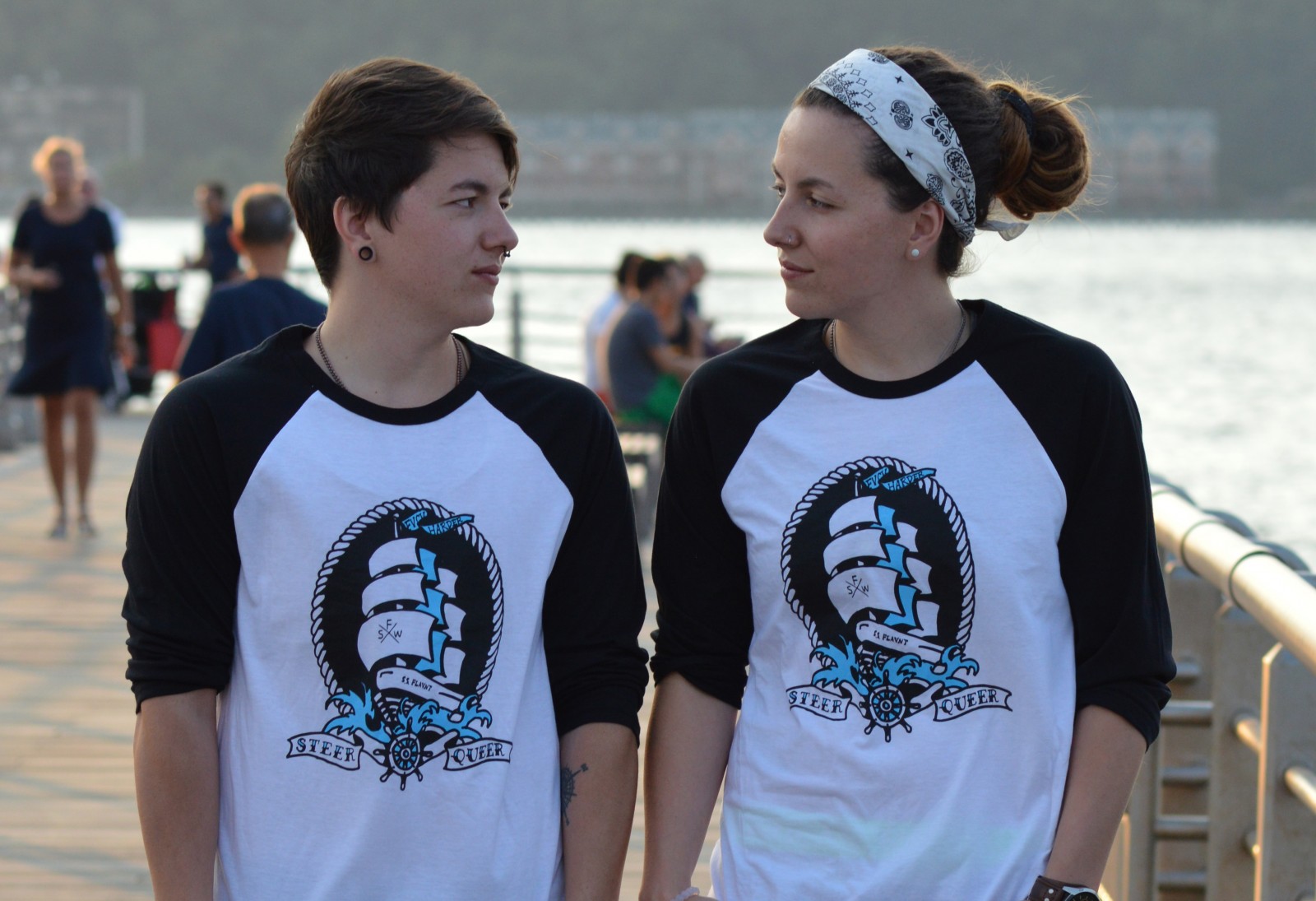 It started with a T-shirt the Rhodes twins — San Antonio natives Chris and Courtney — made to commemorate Pride. “We made shirts for Austin Pride,” Chris says. “I [wore] a shirt that said ‘Pretty Boy’ on it and had at least 100 people ask me where I got my shirt.”

The positive feedback inspired them to make more shirts. “We were like, ‘Wow, a lot of people resonate with this,’” Chris says. Both graphic design majors at Texas State University, the twins liked clothes and had experience making shirts from their printmaking class.

After graduating from college in December 2013, the twins founded FLAVNT: an LGBTQ clothing line that helps raise funds for trans individuals working toward gender-confirming surgeries.

“We picked the name FLAVNT because flaunting is what we wanted to motivate people to do,” Courtney says. “We wanted to be a company that was a voice and role model for members of the community.”

“On top of promoting Pride, we wanted to give back to our community as well, so we started doing fundraising partnerships,” Courtney says. “We chose to help trans individuals because Chris is trans and he knows just how hard trans people struggle to pay for gender-confirming surgeries that are so necessary to improving quality of life.” Their designs, such as their “Gal Pal” T-shirt, have garnered attention from several media outlets, including BuzzFeed, New York magazine, Flurt and Refinery29. This success, however, didn’t come overnight.

“It was a side project initially, because we were saving up to live in New York,” says Courtney. “So we were living at our parents’ house and just doing that. It started out on [the e-commerce platform] Storenvy, so we didn’t even have our own website.” A few moves, internships and coffee shop jobs later, they’ve settled in Austin to work on FLAVNT full time. “Our ‘Gender Roles Are Dead’ design blew up, so then we did [other designs] and that coincided with our first fundraising partnership,” says Courtney. “Our first partner was pretty popular on and into social media, so we worked with him and just kept growing. People really liked the idea of helping individual people, the philanthropic angle of our business. So we did that for three months; then we decided to keep doing that. We’re on our fifth partner now.”

In December 2015, the duo raised more than $25,000 from a Kickstarter campaign for the Bareskin Top, a transmasculine swim binder. As described on the Kickstarter page, the binder is “a swim top for people who don’t have swimwear options … Our swim binder allows non-binary people to feel comfortable in their bare skin.” The idea for the Kickstarter campaign arose from a need the twins noticed through personal experience. “We went to Coney Island and Chris was in a sports bra and our friend was in a binder, and binders are like down to your belly button. It’s black, it’s hot it’s tight. That’s not comfortable,” says Courtney.

They also saw a need for making nude-colored binders. “Even if you’re not swimming in it, you might want something under a white T-shirt or a tank top. Normal binders come up so high that it doesn’t look like an undershirt. If anything, I was like, ‘What if we make something that’s not meant to be seen?’” says Courtney. So they took that concept and merged it with a sports bra to develop something with a range of motion. “Also binders can be unsafe for physical activity,” Courtney adds. “And the less material on your body, the less hot you’ll be. Just from a logistics standpoint, bras are meant to support your chest, so why aren’t we looking to those as a guide for something to build off of?” FLAVNT is also looking to offer a range of colors and not just, as Chris puts it, “Band-Aid colored.”

We just had a prototype finalized. Once we hit production, it will be about an eight-week process. We’re gonna listen to feedback and just make tweaks according to that,” says Chris. “We want to give people an option that makes them slightly more comfortable when swimming.” Design innovation and positive feedback aside, FLAVNT still faces challenges. “We’ve had people tell us we’re transmasculine exclusive. We have a lot of gender-neutral clothing, which some people have a problem with because gender-neutral tends to lean masculine,” says Courtney. “Even though we’ve been helping trans guys, we try to be as inclusive as we can, like including femme lesbians or straight allies in our photo shoots. We make sure that diversity is there.”

They have received feedback about the ages of their fundraising partners, claiming that they don’t help older trans individuals, or those who have or haven’t started [Testosterone treatment] yet. The duo cares about the feedback but are “not going to get into a competition of who deserves what,” says Courtney. “People will always complain about something, and, as a small business, we’ve learned that,” says Chris.

Being visible faces of the brand, “people will attack us personally,” says Courtney. “But besides that we don’t have too many issues … Except we don’t know anything about business.” They both laugh.

All of FLAVNT’s marketing is handled via social media platforms like Instagram and Tumblr. “It’s super saturated so it’s hard to get noticed, but we just use our following to get more.” FLAVNT currently boasts 13,000 followers on Instagram and 7,000 on Tumblr. “It’s not just trans men, it’s open to any trans person, we just haven’t had any trans women apply,” says Chris. “A lot of it is just the reach that we have on the internet, because I’m trans, so I have a lot of trans guy followers on Tumblr and Instagram. We’d like to one day help trans women too; they just have to hear about us.”

“We repost anybody,” says Courtney. “Our social media isn’t curated in a way that’s just high-quality shots. If you tag us, we’ll repost you. And people feel special when you shout’em out, and it also kind of gives them credit, so our fundraising partner can see the people who have contributed to the cause.”

The duo started with two designs and now “have like 20 … We just try to be a brand for everyone. We help trans guys, but it’s not just a trans-guy brand. We’re also queer-run; we’re not a gimmick,” says Courtney. “We’re both queer, and we help trans guys because [Chris] knows what it’s like, and I know because I’m his twin and I see it every day. I think that’s important to know that we’re genuine about the cause.” As a small business, measuring success can be hard. The twins behind FLAVNT find success in the impact they’re making. “We’re helping people and that’s, I think, the coolest part about it,” says Courtney. “We get messages all the time from people saying, ‘I wore this shirt when I came out,’ or ‘this shirt made me feel so confident,’ and that makes me feel good about what we do.”

Who’s the worst cock-block or clam-jam to your snag game? It isn’t the ripped firefighter on Scruff or the hot...