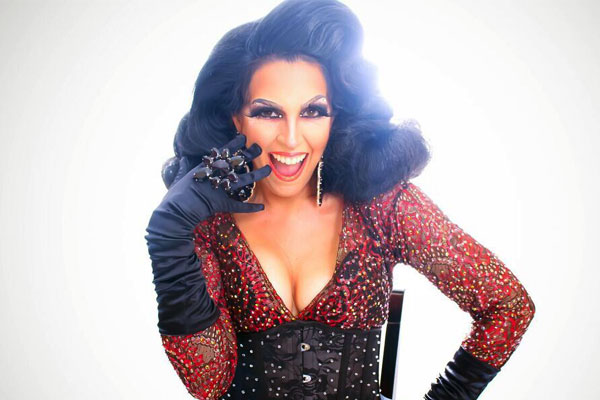 After stumbling upon an episode of RuPaul’s Drag Race, best-selling author and motivational speaker Jackie Huba realized the transformational power of drag. Since then, she has been channeling her inner-fierceness through her own drag alter ego, Lady Trinity, and made history by becoming the first female drag queen to give a TED Talk.

In the new book, Fiercely You: Be Fabulous and Confident by Thinking Like a Drag Queen, Huba and co-author Shelly Stewart Kronbergs lay out the keys to fierceness, teaching readers how to apply these lessons in their everyday lives.

Out In SA caught up with Huba over the phone from her home in Austin in anticipation of her book signing at Heat Nightclub on August 31.

What is the most empowering thing about being a drag queen?

The most empowering thing is this idea that you are creating an alter ego – you’re creating a persona and that persona can be anything you want her to be. For so many of us, especially women, we have confidence issues, so you feel the need to build a persona that is fierce, that is fabulous, and that you’ve always wanted to be. It allows us to be that and to think about how to be more powerful in our everyday lives. We can channel that drag persona.

Have you received any negative feedback? Has it been hard to convince gay men to accept a female drag queen?

No, not at all. The drag community has been extremely accepting. There have always been different categories of drag. I mean, we have drag kings, we have bio queen . . . Every drag queen I’ve ever encountered is very accepting. I think there are just a few people who don’t know about those categories, and who think this isn’t really drag, and who don’t know that there have always been women doing drag.

I’ve interviewed seventeen different drag queens from Drag Race. We have everyone from Adore Delano to Jujubee, Latrice Royale, and Derrick Barry. I think one of the things that I talk about with them, and I ask them for advice, and what a lot of them have told me is that “you have to love yourself enough for everyone.” Trixie Mattel was actually the one who said it the best, she said “My look is very polarizing but I have to love myself enough for everyone.” I’ve heard different variations of that from almost every queen I’ve spoken to: You really have to love what you’re putting out to the world and not care what other people think.

What are some of the things Lady Trinity can do that Jackie Huba cannot?

I don’t have a theatrical background so thinking about doing drag was very daunting. The first thing I did was sign up for a burlesque class. I thought that I’d maybe learn how to seduce a crowd. I’ve never felt like a sexy person but onstage Lady Trinity is very sexy. She doesn’t care if her butt is hanging out. She doesn’t care if her boobs are hanging out. She’s very open in her sexuality and that’s something that Jackie has never been comfortable with. So I feel I’ve really learned a lot in that area.

Who do you think your target audience is?

Originally, we thought women would be the main target only because, as I mentioned, women do have these confidence issues. Thinking like a drag queen and learning to be fierce is something that women really need. The more that I’ve gotten the book out, I’ve found that lots of people, guys included, are loving it, and they are doing the exercises in the book. I think this idea of channeling a persona that has a lot more power than you is kind of a universal concept. We’re finding it appeals to everyone.

Do you and Lady Trinity have the same measurements or does she use extra padding?

Jackie Huba will be signing copies of her book after the Naomi Smalls performances on Wednesday, August 31 at Heat Nightclub.

How Would Texas’ Cyberbullying Law Navigate the Murky Waters of Free Speech?

Originally published in the San Antonio Current Senator José Menéndez will have to bridge a tough line in his proposal...