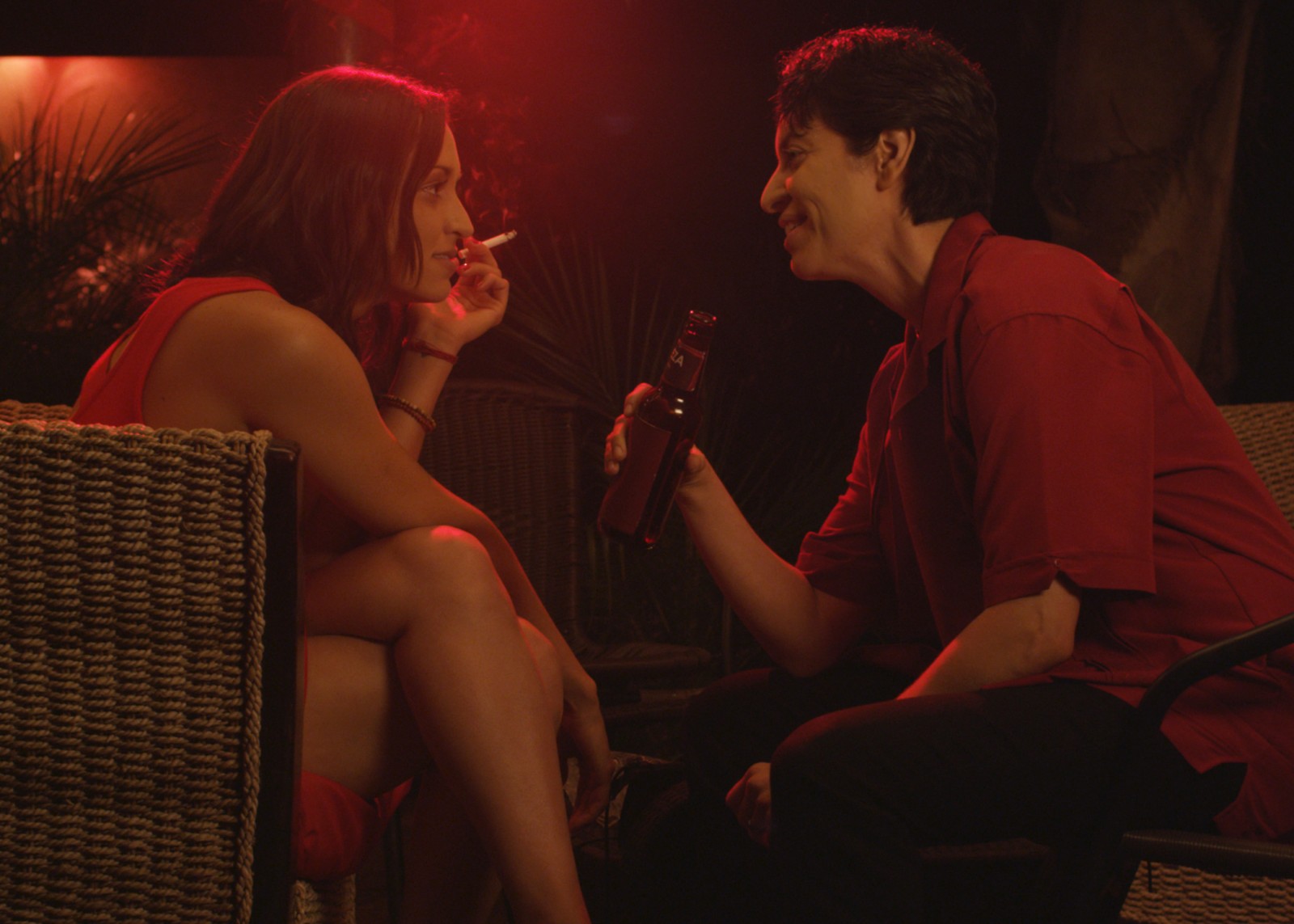 “Bringing all of your beautiful, complicated, queer self to the art is what will make your voice unique and refreshing.”

In March 2007, I was introduced to the character Yoli Villamontes at a stage reading where queer Xicana powerhouse Adelina Anthony read an excerpt from Bruising for Besos. A few years later, I would have the honor and privilege of working with the San Antonio native in the development of Tragic Bitches: An Experiment in Queer Xicana & Xicano Performance Poetry, which
we wrote with Lorenzo Herrera y Lozano for Kórima Press. We spent many wonderful nights sipping wine and sharing stories from our pasts on her dangerously unpredictable sleeper sofa.

But, on that humid night in March, I would find myself ugly-crying into the paper playbill in my lap, fully committed to the emotional journey of Villamontes, who is named for the Nahuatl derivative of “yolotl,” which means “heart.” In the stage version of Bruising for Besos, a charismatic young Xicana lesbian, who spent her teenage years in San Antonio, held up a mirror to the audience, inviting us to explore our own experiences with domestic violence, and the task of ending the cycle of abuse, as we learn to love ourselves and others in adulthood.

Even before our West Coast tour of Tragic Bitches I was completely captivated by Anthony’s style, distracted by her performance when we were onstage together, and I was supposed to be focused and in character. Anthony can weave dark, heavy heartbreak and bright, tender comedy into a beautiful rebozo that wraps you in comfort and bright colors.

Anthony developed the solo show version of Bruising for Besos
in 2003 during graduate studies in drama at Stanford University, under the direction of her mentor, Cherríe Moraga. The play premiered in 2009 at the L.A. Gay & Lesbian Center, earning Anthony a nomination for Best Solo Performance from LA Weekly. The show was extended twice due to audience demand. In addition to Bruising for Besos, Anthony has authored the acclaimed plays Mastering Sex & Tortillas and Las Hociconas, a comedic triptych
that includes La Angry Xicana?!, La Sad Girl and La Chismosa!!! As this article went to press, a feature-length film based on Bruising for Besos was set to make its debut at the Frameline Film Festival in Berkeley and at the Victoria Theatre in San Francisco. The film was produced by AdeRisa Productions, which Anthony founded in 2012 with Marisa Becerra to create movies by and for queer and trans people of color (QTPOC). In an interview with Out In SA, Anthony said it was natural to return to the screen after the play’s successful theater run. “I think these are exciting times for queer/trans people of color filmmakers, because there is access to the tools of filmmaking,” Anthony said. “Making a film, even on a micro-budget, is possible.”Even a successful stage performance reaches an audience of just thousands, while film offers the opportunity to leave a larger legacy. “After financing, the other big struggle is distribution, but even that ground has shifted with the explosion of the internet and social media,” Anthony said. “Film has an exponential circulation promise, and this means our QTPOC stories can find local and international audiences.”Creating this legacy for QTPOC greatly influenced how the film project was cast. Feature films are often cast with well-known names, even if those actors are not the best fit for the project. With a grassroots casting approach, the AdeRisa Productions team worked hard to debunk myths that queer and trans talent isn’t available. “This is not the case, by any means, especially in these contemporary times, when queer and trans people of color talent is more abundant than ever,” Anthony said. “While this may be the first time an out Xicana lesbian actor plays a Xicana lesbian protagonist in a feature film, it is equally important to note that almost all of our major supporting roles have been cast with out queers and a trans people of color.” Only one ally was cast in Bruising for Besos, Carolyn “Caro” Zeller. The rest of the cast is filled with multi-genre QTPOC artists. Lead character Rani, Yoli’s best friend, is played by D’Lo, a queer transgender Tamil-Sri Lankan-American actor, writer and comedian. Anthony created Rani because she wanted Yoli to experience the loss of a best friend, but also because Anthony believed in D’Lo, a San Antonio favorite who has struggled to find substantive film and television roles. Performers Natalie Camunas, who plays Rani’s girlfriend, and Lawrencia Dandridge, who portrays Yoli’s bartender ex-girlfriend Imani, also contributed original songs to the film’s soundtrack. Anthony says that she and Becerra “hope our film signals to other filmmakers that it is a boon to cast talent from our QTPOC communities.”

“As in all of my works, I/we intend to keep centering QTPOC stories with an emphasis on Xicana/Chicana/Latina characters, and to keep casting from our communities, for these are the bodies that quite literally bring with them our complex and intersectional histories,” Anthony said.

The eldest of eight, Anthony was born at Bexar County Hospital, graduated from McCollum High School, and worked a stint at H-E-B. Like many who grew up on the South Side of San Antonio, she enjoyed family trips to the Mission Drive-in and Mission County Park. “We used to go on the weekends, and while we played on the merry-go-round, our parents would be dancing to Tex-Mex and conjunto bands,” Anthony recalled. “It’s where I would win a goldfish that never lived more than two or three days.”

Dysfunction at home motivated a young Anthony to stay busy with theater, volleyball and basketball — but never track, because it would interfere with her University Interscholastic League competition schedule. A member of the Academic Decathlon team, Anthony won her high school’s first gold medal at a speech competition. The support of her coach, her sophomore English teacher and her history teacher made her teen years more tolerable, she recalled, and motivated her to go to college. “I look back on those years and marvel that I survived,” Anthony said. “But I think that’s the key: We survive because others take the time to love, nurture and guide us. I keep in mind the circumstances and emotional mess I was at that age, and [that] helps me come from a place of a lot of compassion and patience when I work with youth from our communities.”

Anthony has more than 20 years of experience in playwriting and theater production, but considers herself an emerging artist in the film industry. Through her years of traveling to share her stories, she has built a network of queer and straight men and women of color who have found a connection to her and her words. These peers and allies have contributed to the funding of the film and raised the project’s visibility. Anthony has been invited to participate in the Sundance Institute Screenwriters Intensive, was selected to be a Screenwriting Fellow in Film Independent’s Project Involve 2012-13 and was awarded the Sony Pictures Diversity Fellowship. “I’ve been learning immensely from so many people in the film industry, but hands down, my Film Independent Project Involve mentorship, that I had for two years with story editor Ruth Atkinson, was critical in developing skills for screenwriting,” Anthony said. “She’s really great about identifying the problem the character has and then helping you to see if you’ve covered all the critical beats so that you can get to a satisfying ending. My favorite question of hers is, ‘What do you want the audience to walk away feeling?’”

Anthony encourages San Antonio’s QTPOC emerging artists to leave home to experience new perspectives and the work of other artists. But she adds a gentle reminder to come back. “Remember to make the return home, metaphorically and literally, whenever possible, because this also teaches and reveals to you who you are becoming,” Anthony said. “You don’t have to abandon any aspect of who you are to pursue an artistic career. In fact, bringing all of your beautiful, complicated, queer self to the art is what will make your voice unique and refreshing.”

Bruising for Besos will also make a much-anticipated return home. Plans are being made to submit the film to San Antonio-based festivals and a forthcoming fundraising campaign will support the second film in the trilogy, which is set entirely in San Antonio.

Anthony and Becerra will also continue to develop their indie QTPOC company, creating work opportunities for community artists who share their values and vision. “We need the artistic and spiritual courage of our next queer generations,” Anthony said. “The most vital advice I can give is to learn your intersectional historias — ethnic, gender, class, artistic, etc. — because this gives you a lineage to work from, and be in conversation with, as you create.”

Unity Church San Antonio and several other faith communities will come together for an interfaith service on July 12 to...