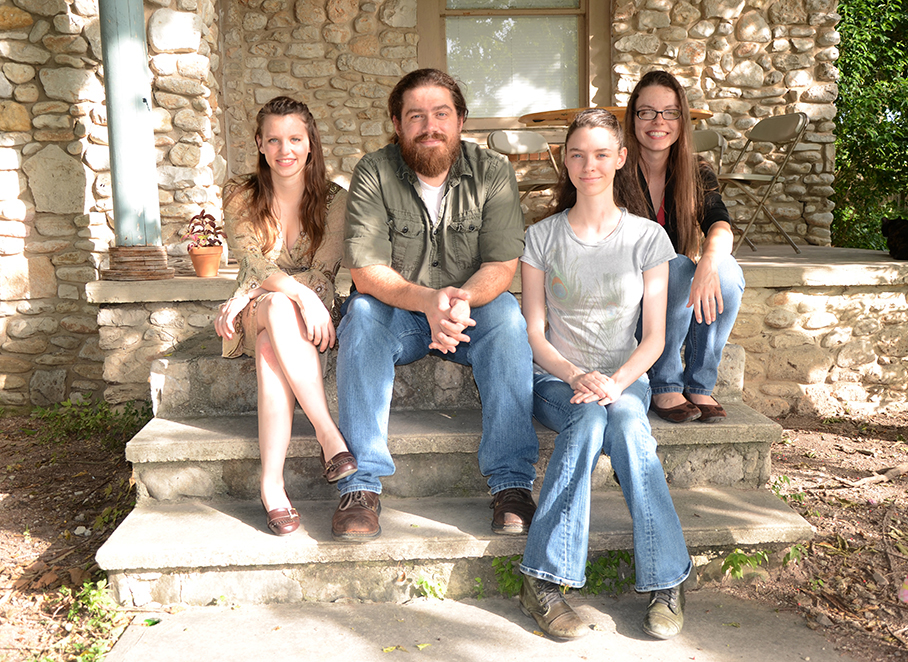 Audrie, James, Ashley, and Elizabeth Lowe photographed for Out In SA during the summer of 2015.

“My kids don’t see what goes on in our bedroom. We sleep.”

After the housing crash of 2008, James Lowe, a former construction worker, moved to San Antonio from his hometown of Columbus, Ohio. With him came Elizabeth. The two were close friends at the time and hoped to find a better life in San Antonio.

James, 34, and Elizabeth, 27, have since married and now have four children between them. Elizabeth is expecting her fifth child with James.

Elizabeth considers herself mainly lesbian but says that James is the exception to that rule. In 2011, when Elizabeth first came out to James, he revealed that he felt he had the capacity to love more than one person. Shortly after enrolling at San Antonio College in 2012, the couple met Audrie, 22, and Ashley, 21. Eventually, the couple’s friendship with the two women evolved into a romantic relationship between the four.

Today, they are in what the four call a polyfidelitous relationship, and all share the same home. They describe it as a “partnership between four people.” “It’s not an open relationship,” James explains. Each individual is fully committed to the others and has equal standing in the relationship.

Ashley has one child with James, and Audrie is expecting her first. James has five other children from two previous relationships, bringing his total number of biological children to 10. The four say they enjoy having a large family and see nothing wrong with it.

“I fell in love with the children first,” Ashley said. “Then with the ladies, and then with James.”

“Gradually, over time we all kind of grew to love each other, and we decided that our relationship just kind of worked between us,” Audrie said. “The kids really liked me and I fell in love with the kids as well. We just really worked as a family unit.”

Elizabeth says she is aware of the potential for unhealthy relations that a polyfidelitous relationship may bring. “I don’t think anyone is going to argue that,” she said. “There are people who have been in poly relationships and have had bad experiences. It just happens to work for us.”

While the four express satisfaction with their relationship, they say outsiders have been meddling in their family. The family is in a legal battle to keep custody of their children.

The trouble began in August 2013, when Elizabeth’s parents came from Ohio to visit. “One of the main reasons I had moved to Texas was to separate myself from them, because they were kind of controlling,” Elizabeth said. During their visit, Elizabeth’s parents had hoped to convince her to move back to Ohio and bring the kids with her. They offered to buy Elizabeth and James a home in Ohio and to provide childcare. At that point the couple had already made the decision to become polyfidelitous and were committed to Audrie and Ashley.

“Before they left we all had a meeting at their hotel,” Elizabeth said. “I felt that we needed to be honest, knowing that we were considering moving to Ohio, and accepting these things from them so that the kids could be closer to their grandparents. They had already been told by members of our old church and were very concerned.”

That meeting between James, Elizabeth, and her parents did not end well. Her parents were infuriated. “They told us if we continued in our relationship then the offer was off,” Elizabeth said. “My mother accused me of being controlled by the devil.”

“When we turned down their offer for money, they took that money and sued us,” James said. “They went and got a condo here in San Antonio to bring a suit against us [for custody of Elizabeth’s four children].”

Elizabeth says her parents have made false claims against the family, and that her parents believe James is controlling and manipulating the women in the relationship—a claim the women deny.

“[Elizabeth’s parents] said that there was broken glass everywhere, and feces and urine everywhere,” James said. “They said that I abused the children. They accused me of being some sort of manipulative mastermind and that I had everyone around me under some kind of mental control. They made it all about me.”

Elizabeth’s four children were taken from their home and sent to live temporarily with their grandparents. The family has been investigated by Child Protective Services, and a court appointed psychologist has met with the family. “CPS ruled everything out and the court-appointed psychologist had given note that she found no evidence of abuse and neglect,” James said.

“We were really encouraged by that,” Elizabeth added. “We thought that would be it.”

The family is going against advice to stay silent. “We were told to hide because our culture isn’t ready for our type of relationship,” Elizabeth said. But they now believe it is necessary to address misconceptions about what the family is and is not. The four want to make clear that they are not polygamists and are not involved in any type of religious cult.

“What people don’t know or understand scares them,” Audrie said. “For us to hide, and not come out and be honest, and explain the details of how we all work and function together, it creates this fear and paranoia of our relationship. Before, when we didn’t share that information, we found that people’s imaginations just run wild as they try to put pieces together. It’s best for everybody to come out and be honest.”

Audrie and Ashley say they have strained relationships with their parents, who also do not approve of their relationship. “My mom used the D-word to describe our relationship,” Ashley said. “She said it was disgusting.”

James’s ex-wife has filed a second case in Ohio to get custody of two of her biological children that had been living with James and the family. Those two children have also been removed from their home in San Antonio.

James claims that before their legal trouble began, the family was financially secure. Today, they are struggling to pay the legal fees necessary to fight for their children. The family has been taking donations from an Indiegogo campaign to travel to Ohio.

“[Elizabeth’s parents] think that if they can take the kids away from us, it will break up our relationship and it will force [Elizabeth] to go back to Ohio with them,” Audrie said.

“Our orientation is being put on trial.”

“The fact of the matter is everyone knows no abuse or neglect has occurred,” James said. “This is entirely about us being a poly family. Our orientation is being put on trial. It is not right. There is no danger to the kids. It’s just been a witch hunt and they made me the target.”

James has started a Facebook page that documents the family’s legal battles. In one video posted to the page, Audrie and James are seen expressing their frustrations with the current situation. “None of this is really fair to anybody, but I think that it’s especially unfair to the children,” Audrie says in the video. “These kids have so much stress and worry on their plates that I feel they can’t even be kids right now and that’s unfair. These people have not only robbed us of our freedom, and our privacy, and our children, but they’ve robbed our children as well. And I think that’s crap. If you want to mess with me, or [James] then that’s one thing—but you don’t mess with children. You just don’t.”

Despite limited funding, the family plans to appeal the court’s decisions and fight each case.

“I know [Elizabeth’s] parents will throw all their money and fight it all the way, too,” James said. “Now, I don’t have money, but I have tenacity, and I have love for my family. As much as we don’t want to be in the spotlight we have no choice. If we are quiet, then we lose everything. And then what happens to the next family that they go after? Someone at some point in time has to stand up and say enough is enough. We are just people. We just want to be left alone.”

The Saint Showbar to close

After 23 years of drag shows, dance parties and happy hours, the Saint Showbar on Lexington Avenue announced it will...