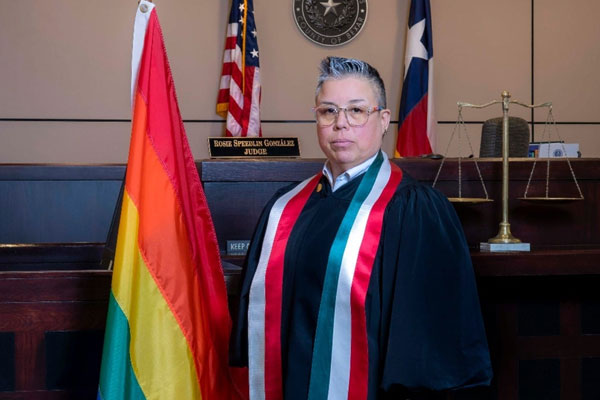 This commentary was originally published in the San Antonio Express-News. It is being republished here with the permission of the author.

Courtrooms are filled with symbols designed to send a message to all who enter. The most common is Lady Justice, blindfolded and holding scales, to signify that justice should be blind and balanced. The seal of Texas connects the court proceedings to our history as Texans.

In Judge Rosie Speedlin Gonzalez’s courtroom, people would see a rainbow flag standing next to the U.S. and Texas flags. The flag was a gift from our local LGBTQ LULAC Council, Orgullo de San Antonio, of which I’m a founding member and the immediate past president, because of her leadership and visibility as a lesbian.

Gonzalez was asked by the State Commission on Judicial Conduct in Texas to remove it and other rainbow decorations from her courtroom after a complaint was filed by defense attorney Flavio Hernandez, who also wanted the judge recused from any cases he handled. The commission stated the flag created the appearance of partisan bias.

Such complaints had not been brought up about other Bexar County judges who display symbols of their beliefs and identity in their courts — from Mothers Against Drunk Driving emblems, to Bibles and crosses, to Irish flags, to the “thin blue line” flag that represents support for law enforcement. A family court in the county even had its own rainbow decorations to create an environment that make the children who come in feel safe.

Many LGBTQ individuals in this country continue to experience ostracization and abuse from relatives, the justice system and anti-LGBTQ activists, in addition to discrimination in employment, housing and public spaces. Working for Equality Texas — a statewide LGBTQ advocacy group — I’m all too familiar with the stories of survivors of these injustices and violence. Up to 40 percent of all homeless youth identify as LGBTQ. Many of them have been driven to the streets by families who have kicked them out or to escape physically or emotionally abusive homes.

If a judge can freely display crosses and Bibles in court without the assumption of bias against LGBTQ individuals like me, Gonzalez should be given the same benefit of the doubt. If a judge can show a “thin blue line” flag in court despite the difficult experiences many LGBTQ individuals, Latinx and other marginalized people had with law enforcement, then Gonzalez should be allowed to display a flag that symbolizes community and unity.

Hernandez’s complaint shows he holds more bias than Gonzalez. More importantly, his and the commission’s actions to stifle her freedom of speech prevent her from fully realizing our shared goal of creating spaces where fellow LGBTQ and Latinx individuals are treated with respect and are assured of fair treatment.

All Gonzalez wants to do is represent our community at her place of work, like so many others are free to do. She wants to show our community that despite all the struggles and antagonism we face, we deserve to have the same right to justice and equal treatment as everyone else. That is not merely her First Amendment right as an American but exactly what makes her qualified to be a judge.

Robert Salcido is the community outreach and engagement manager with Equality Texas and also serves as the executive director with Pride Center San Antonio. He is active in various community roles and has extensive experience working with issues of equity, diversity and inclusion, LGBTQ+ education and discrimination.

On May 12, Texas Attorney General Ken Paxton wrote a letter of warning to the mayors and county judges of...