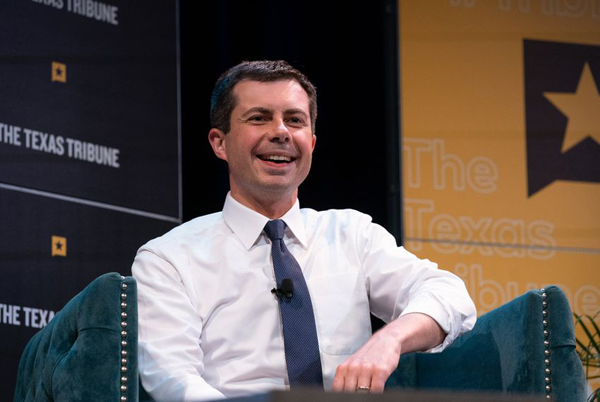 Starting Monday, the campaign will have 24 paid staffers in the state of Texas, which holds its primaries March 3.

The 24 staffers start Monday and will help volunteers already on the ground, his campaign told The Texas Tribune. The Texas ramp-up is part of a broader expansion across the delegate-rich states that vote March 3.

“We are building the campaign that will not only win this nomination but will defeat Donald Trump in November,” said Samantha Steelman, the campaign’s organizing director for Super Tuesday states.

Sara Goldstein, the former regional organizing director in Iowa for the Buttigieg campaign, will now lead its efforts in Texas. The campaign will welcome its latest staffers to the state over the weekend with events in San Antonio, Austin, Dallas and Houston.

“This ramp-up will provide more staff and resources to train, resource and guide our 25,000 volunteers in Super Tuesday states that will push our campaign across the finish line on March 3,” Steelman said.

In addition to staff on the ground, Buttigieg’s campaign is also ramping up activity in targeted groups like Students for Pete and Veterans & Military Community for Pete. The campaign says it already has more than 80 Students for Pete chapters, including ones at Collin College, Rice University, Baylor University and the University of Texas at Austin.

Before this week, Buttitigieg hadn’t built a formal ground game in Texas. It has had volunteers here since April but no paid staff focused solely on the state or offices here. It has had a regional organizing director, Michelle Hutchinson, who is based in Austin and oversees organizers working in Texas and other Southwest states.

Buttigieg, the former mayor of South Bend, Indiana, has ascended nationally after surging to top-two finishes in both Iowa and New Hampshire. Earlier this week, he placed second in New Hampshire to Sen. Bernie Sanders. But according to the most recent University of Texas/Texas Tribune Poll from early November, the mayor still has work to do to improve his standing in the state. He earned 6% in the poll, behind Biden, Warren and Sanders.

Buttigieg is one of the less frequent visitors to Texas; his last visit to the state was last month, when he held a series of fundraising events in Houston and Dallas. He will not be at this weekend’s organizing events. Chasten Buttigieg, Pete Buttigieg’s husband, was also in Austin and Dallas in December for fundraising happy hour events.

Disclosure: Baylor University, Rice University and the University of Texas at Austin have been financial supporters of The Texas Tribune, a nonprofit, nonpartisan news organization that is funded in part by donations from members, foundations and corporate sponsors. Financial supporters play no role in the Tribune’s journalism. Find a complete list of them here.

The Jump-Start Performance Company is honoring San Antonio drag legend Jessica St. John (aka John McBurney) with an exhibit and...