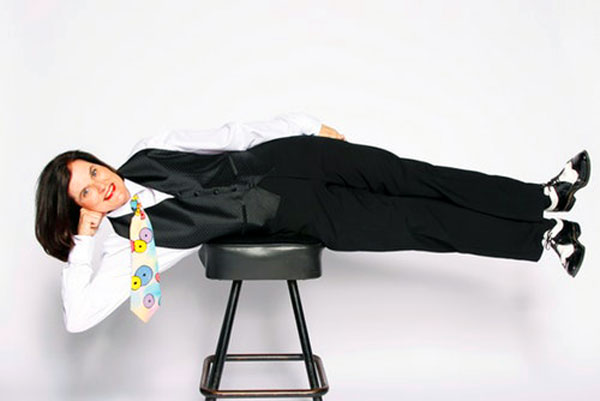 Stand-up comedian Paula Poundstone isn’t letting the global pandemic keep her down – for the most part, at least. Over the last year and a half, Poundstone, best known these days for her quick-witted responses on National Public Radio’s quiz show Wait Wait…Don’t Tell Me, has kept busy hosting her own podcast from home, Nobody Listens to Paula Poundstone.

She’s also been creating dozens of one-woman comedy skits for her website, including a game show (Nobody Asked You!), cooking show (The Rhonda Series) and workout videos (Paula’s Workout Series). In the Ms. Nancy Series, she plays an elementary school teacher interacting with her students over Zoom. “Are we lucky ducks or what? It’s Pajama Day again!”

Poundstone is also back on tour after months away from the stage. She’ll be at the Empire Theatre on Thursday, September 16 at 8 p.m. During an interview with the Current, Poundstone talked about loneliness during the pandemic, her thoughts on Texas Gov. Greg Abbott getting COVID-19 and why her favorite junk food snack has recently broken her heart. How is pandemic life treating you these days?
Oh, it’s OK. I’m one of the lucky ones. I’m healthy. I have a lot of animals. I have some work that I can do without leaving the house.

I saw some of your pets making it difficult for you to workout.
They do! They increase the degree of difficulty, that’s for sure. I had a cat that was blind, so anytime I would do anything like jumping jacks, I had to have my Spidey sense on so I wouldn’t accidentally step on her. But I think that might’ve made me squeeze my abs more.

How do you find humor in the times we’re living right now?
Well, we can’t find humor in the pandemic itself, but we can from our reactions to it. We are all having a shared experience. Oftentimes in comedy, you go tell [your experience] to people and they laugh in a way that I always refer to as “recognition laughter.” There’s something about that kind of laughter that makes you feel like a part of the human race. During the pandemic, we’re telling one another about our isolation. We really are all in this together as much as people think that’s not true.

Have you felt isolated yourself in the last year and a half?
There are different types of loneliness. There have been times in the past where I would be at a party and felt really lonely. It doesn’t necessarily have to do with whether you’re in the presence of another human being. But there have definitely been times where I’ve wanted to turn to somebody and go, “Boy, this sucks, doesn’t it?”

Something that really sucks is how political wearing face masks has become. Texas Gov. Greg Abbott is trying to stop mask mandates and then he ends up with COVID-19 himself. Headlines like those aren’t that surprising, are they?
I saw it on CNN’s website, and it wasn’t even a headline. It was just among this list of “bad shit.” You know, I was ashamed of myself when I read about that. My reaction was like, “Well, duh! That’s what you get, you idiot!” But as soon as I thought that I was like, “Oh, my gosh. I don’t want to be that person.” [Abbott] presents a problem because he’s causing harm to so many people. I don’t particularly want to wear a mask myself, but from what I’ve seen on the news, it doesn’t nearly look as uncomfortable as a ventilator.

You’re putting out so much content these days. What was your initial idea behind the “RX Laughter Videos” on your website?
At the beginning of [the pandemic] back in mid-March last year, I thought it was only going to last a few weeks. I thought it was my job to put out comedy videos to help people cope. Then, the gravity of what we were dealing with became real. They’re fun to do. It got me out of bed each morning to look at the comments. It’s a nice payment for the work.

I know you’re a big fan of Oreo cookies. Are they delicious enough to ignore the fact that hundreds of union workers are currently on strike for what many of them are calling corporate greed in the company’s handling of their work hours and health care costs?
No. I’m so disheartened. I’m sure if you look carefully at most companies, you’d find things to be unhappy about. But this sounds pretty egregious. What’s funny is that I’m the queen of junk food. So, losing me as a customer is really going to affect their bottom line.

Idaho-based speed-waxing concept LunchboxWax has opened its first San Antonio salon at the Alon Town Centre on the North Side,...