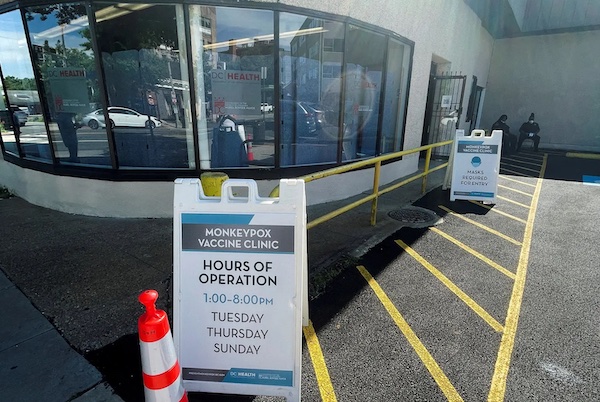 While there are currently 780 confirmed monkeypox cases statewide, Texas cities are bracing for an increase in infections.

by Karen Brooks Harper and Joshua Fechte, The Texas Tribune

Dallas and Austin officials have declared monkeypox a public health emergency — bids both to get in line for federal funding and to send a message to residents that the virus is serious and painful and they should take precautionary measures while the vaccine is in short supply.

“As we’re running out of vaccine and medications, we want to engage our community and ask them to help us stem the tide, the spread of the disease,” Austin-Travis County Medical Director/Health Authority Dr. Desmar Walkes said on Tuesday. “And allow us the time to retool and refuel, as it were, and get what we need to treat people and to vaccinate people who are exposed to the virus.”

Texas’ major cities have received thousands of monkeypox vaccine doses and expect thousands more in the coming weeks, but a national shortage of the shot has officials and the people they’re trying to protect begging for more.

“It is not enough,” Austin Mayor Steve Adler said at a Tuesday news conference. “We need the federal government to do everything it can to increase the availability of medicine and vaccines to our community.”

There are 813 confirmed Texas cases of monkeypox, a contagious rash of painful lesions that can be debilitating but is not typically fatal, nor does it typically lead to hospitalization or long-term health problems. Some 9,491 cases have been documented in the U.S. during the current outbreak, more than any other country.

Monkeypox spreads through close, intimate skin contact with someone who has the virus, and the U.S. Centers for Disease Control and Prevention reports that many, though not all, of the reported cases have been among men who have sex with men, although that is not historically the community where the virus is typically found.

It is not a sexually transmissible disease because it does not require sex to be transmitted, but sex is how it’s commonly being spread currently, health officials said.

While this outbreak has hit some 89 countries so far, the virus had been largely contained in Central and West Africa for decades.

And while it is still negatively impacting those people, as more cases are reported, other demographics are starting to show up in the numbers, according to state data. Two weeks ago, 100% of the cases were in men who have sex with men. On Thursday, that percentage was down to 95%.

The idea of a public health emergency declaration may rekindle concerns about the sorts of business closures and other measures enacted during the early days of the COVID-19 pandemic, but the orders over monkeypox include none of those measures.

The declarations signal to the federal government that those areas are in need of more vaccines and medical tools to beat back the contagion.

But those enacted in Dallas and Austin, officials say, are mainly to raise awareness of the disease and encourage those most at risk to do what they can to slow the spread while the community waits for more vaccine to become available.

Officials are asking residents to wash their hands, avoid direct skin-to-skin contact and isolate themselves if they get sick. They also want people to take precautions as a means of avoiding further financial strain in a tough economy amid inflation and rising housing costs.

“If you become ill, you will have to isolate at home until you recover,” Walkes said Tuesday. “That’s going to be a financial drain on you and your family.”

Rising cases and a vaccine shortage

The call for awareness comes as state and federal officials scramble for vaccine doses to contain the virus as it spreads faster each week.

Similar to the motives and messages behind the local orders, the U.S. Department of Health and Human Services Secretary Xavier Becerra declared monkeypox a public health emergency in order “to unlock additional tools that will help us contain and end this outbreak, and to signal to the American people that we are taking our response to the next level,” Becerra said.

The monkeypox vaccine shortage is attributed to supply chain problems, with an unprecedented worldwide demand in countries that had rarely, if ever, seen the virus on their own soil.

The CDC has said more doses are being procured but that the vaccine may not be widely and easily available until at least next year.

Federal officials are also holding additional doses for states in case they’re needed before the CDC can re-up this winter and “may be released later depending on the status of the outbreak and vaccine administration data,” according to a notice sent to local health officials earlier this week.

Houston, where more than 200 cases have been confirmed, has received nearly 12,000 doses of the vaccine. San Antonio, with 16 confirmed cases, has obtained 1,000 doses. Tarrant County has received 1,100. None of those localities are expected to declare public health emergencies over monkeypox in the near future. The state has several hundred in its stockpile to “for state facilities and filling in gaps that arise,” DSHS spokesperson Chris Van Deusen said.

Austin has received more than 3,100 doses of the monkeypox vaccine. But given the spread of the disease in Austin, that supply is “running out,” Walkes said this week. The local supply of vaccine doses will be down to about 200 by the end of this week, Walkes told Austin’s city council on Thursday.

Strategies for deploying the vaccine in each public health region are up to the local officials and may vary, although state health officials are instructing providers to administer only to those who meet certain high-risk criteria or who have already been exposed through close contact, Van Deusen said.

Some counties, such as Dallas, are allowing appointments to be made only over the phone — with no current online appointment system — and are administering the vaccines in clinics where patients’ privacy can be protected.

Van Deusen said that because different communities have different needs, the state has not specified who each local department can authorize to administer vaccines.

“They know the communities and at-risk populations in their area,” Van Deusen said. “They may choose to administer the vaccine themselves or work with public or private providers who serve particular populations or both. I wouldn’t assume one approach will be the best approach everywhere.”

After weeks of limiting the vaccine only to people who have had intimate skin contact with someone who tested positive for the virus, the state on Tuesday began to allow providers to administer them to certain high-risk people before exposure — a move patient advocates have said would be critical in containing the virus.

Those the state considers to be currently at the highest risk are primarily men who have sex with men and who have had multiple or anonymous sex partners over the past 21 days.

The vaccine can prevent onset even after exposure, scientists say, and can mitigate symptoms in those who do contract it.

The state also now allows people under 18 to get the injections if they are at high risk.

Broader eligibility means potentially more vaccine recipients, but state and federal officials are trying to prepare for that, too.

The U.S. Food and Drug Administration this week approved the administration of the vaccine in a shot injected under the skin, much like a tuberculosis test, as opposed to into body fat, like more traditional vaccines. By offering the shots in this way, only a fifth of the full dose is needed for each person.

“In recent weeks, the monkeypox virus has continued to spread at a rate that has made it clear our current vaccine supply will not meet the current demand,” said FDA Commissioner Dr. Robert M. Califf. “This will increase the total number of doses available for use by up to five fold.”

The method can stretch a vial of vaccine, but it requires specialized training to administer and certain types of needles and syringes.

Dallas County, where more than 200 cases have been confirmed, has received more than 5,000 doses to date but will soon begin using the new injection method approved to stretch those doses and inoculate more people as officials expect numbers there to continue to rise rapidly, Dallas County Judge Clay Jenkins told The Texas Tribune.

North Texas has one of the highest concentrations of cases compared with the rest of the state, state officials said.

“We don’t have enough vaccine to get to all the populations who are at risk of monkeypox based on where the outbreak is right now,” Jenkins said. “That’s the bottom line.”

Public health departments have personnel trained in the administration method but DSHS still has to procure enough specialized syringes and needles before they can start doing the shots intradermally, Van Deusen said.

When and if the vaccine is given to private providers, additional training will be needed, which could take more time, he said.

“We’re certainly recommending it as a way to stretch the supply, but it’s not an instant fix,” Van Deusen said.

Disclosure: Steve Adler, a former Texas Tribune board chair, has been a financial supporter of the Tribune, a nonprofit, nonpartisan news organization that is funded in part by donations from members, foundations and corporate sponsors. Financial supporters play no role in the Tribune’s journalism. Find a complete list of them here.

The self-described 'Demon Queen of Seattle' requests that you 'get your ass out and horns up' for her pair of...