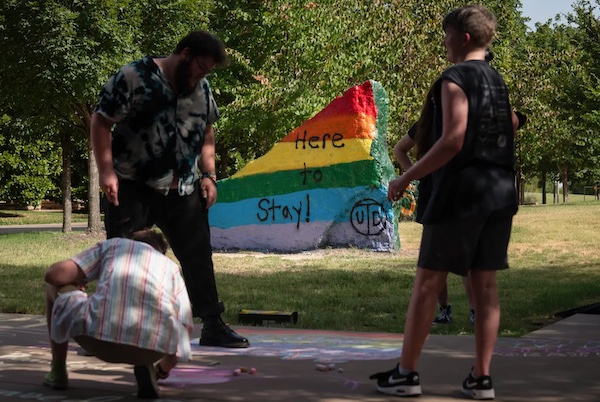 The UT-Dallas Spirit Rock is painted in rainbow colors with a message reading “Here to Stay!” on July 18, 2022. LGBTQ students are calling on university officials to discipline a computer science professor who posted a homophobic tweet with misinformation about the monkeypox virus over the weekend. (Photo: Ben Torres for The Texas Tribune)

LGBTQ students want the university to take “substantive action” against the computer science professor for his tweet, which included misinformation about how the monkeypox virus spreads.

by Kate McGee, The Texas Tribune

Robert Aden Lonergan went to high school in Waxahachie and remembers a class in which students held a debate about whether transgender people should exist.

Incidents like these led Lonergan, who identifies as nonbinary, to enroll at the University of Texas at Dallas to get away from the homophobia and transphobia that surrounded him growing up.

UT-Dallas is often listed by websites that provide college rankings as one of the few LGBTQ-friendly universities in the Southwest, and Lonergan said that in his first two years as a student there he experienced an open and welcoming environment. He loved UT-Dallas’ gender-inclusive housing option and got involved with the university’s many LGBTQ+ student organizations.

But he said he felt like he was back where he grew up in Waxahachie when he saw a homophobic tweet from UT-Dallas computer science professor Timothy Farage about the recent monkeypox outbreak, which has predominantly spread among gay men. Farage’s tweet suggested the virus is sexually transmitted and asked “Can we at least try to find a cure for homosexuality, especially among men?” Health officials say one of the main ways monkeypox spreads is through prolonged physical contact, but it is not a sexually transmitted disease.

“I came to this university to escape homophobia in my town and now I’ve encountered something that puts me right back there,” Lonergan told The Texas Tribune. “I can’t do that again. I can’t go through that again.”

The incident, which was first reported by the student-run newspaper on campus, The Mercury, has sparked an outcry among LGBTQ+ students and allies who are demanding UT-Dallas administrators take “substantive action” against the professor and reaffirm that the university is the bastion of inclusivity that it touts itself to be. UT-Dallas says it is investigating the complaints about the tweet.

The Centers for Disease Control and Prevention has reported nearly 2,000 probable or confirmed monkeypox cases in the U.S.

Medical professionals have warned about growing amounts of misinformation about the monkeypox virus. The disease is commonly transmitted to humans through close contact with an infected person or animal, according to the World Health Organization. One common way it can spread is through sexual contact, and monkeypox rashes can resemble some sexually transmitted diseases, which may explain why several of the cases in the current outbreak have been identified in men seeking care in sexual health clinics, according to the WHO.

Farage, who has since deleted his Twitter account, did not respond to the Tribune’s request for comment Wednesday. But the senior lecturer defended his comments to the Dallas Morning News, arguing that it is compassionate to find a cure for “homosexuals who’d rather be heterosexual.”

“If somebody doesn’t want to be, why not try to find a way to help them do that?” Farage told the Morning News. “My comment was to try to be helpful and compassionate … I never said a word against homosexuals or transgender individuals or anything.”

The American Medical Association states that the assumption that sexual orientation or gender identity can be changed is not based on medical or scientific evidence.

Farage also defended his comments to the newspaper as free speech.

The tweet was sent amid a backdrop of increasing anti-LGBTQ rhetoric across Texas and other states. Last year, Texas lawmakers passed a law requiring transgender children to play on sports teams with children of the same biological sex at birth. A legal fight sparked this year after Gov. Greg Abbott directed the Texas Department of Family and Protective Services to investigate parents who provide gender-affirming care to their transgender children. Lt. Gov. Dan Patrick has also said he wants to pass a law similar to one recently passed in Florida that would prohibit public schools from teaching about gender identity or sexual orientation.

UT-Dallas officials initially responded to Farage’s comments over the weekend on Twitter, saying they are aware of the tweets and that they do not represent the views of the university or the Erik Jonsson School of Engineering and Computer Science.

“We unequivocally denounce statements that disrespect groups or individual members of our community,” the university wrote on Saturday. “UT Dallas is committed to providing an educational, living, and working environment that is welcoming, respectful and inclusive.”

On Sunday, a group of LGBTQ+ student organizations that calls itself the UTD Rainbow Coalition released a joint statement demanding the university take more action.

They alleged Farage has a history of making inappropriate and political comments in class that make students feel uncomfortable.

“Merely disavowing Farage’s actions actively makes our campus less safe,” the group wrote. “Once again, as students of UT Dallas, we call upon the university administration to take immediate, substantive action on the issue.”

“UTD prides itself on being one of the best schools for LGBTQ+ students in the south, so seeing that [response] felt kind of like a stab in the back to some students,” said Chase Mueller, president of the UTD PRIDE student organization. “It felt like maybe they weren’t going to be safe in their classes and their school.”

Three days after Farage posted his tweet, the university released a subsequent statement saying it is investigating several complaints it has received related to a UT-Dallas faculty member’s comments on Twitter. The school also announced it opened up additional sections with different professors of the fall classes that Farage is scheduled to teach to provide more options for students.

A UT-Dallas spokesperson told the Tribune the university couldn’t comment further on the nature and scope of the investigation.

The Jonsson School also sent a letter to students saying they heard from many students that they are disappointed and feel unsafe because of Farage’s public comments.

“People who have loved outside of heteronormative ways have made significant contributions to STEM and the world,” Dean Stephanie Adams wrote. “The Jonsson School is becoming a place where any of you, being your most authentic self whether that is black, white, gay, straight, Christian, Buddhist, fully able-bodied or not, should feel welcome and as if you belong.”

Some professors and students across the country have come under fire over the years for making comments on social media that other members of their university communities found racist or homophobic, raising perennial questions about free speech versus building a safe and inclusive environment for students to learn on campus.

Last spring, students at the University of North Texas demanded the university expel another student for posting comments on social media and hosting events on campus that they argued were transphobic and made transgender students feel unsafe and unable to learn. The university said the student had not violated any university policies.

In some instances, universities that have fired professors for their social media posts have drawn criticism and faced accusations of censoring their employees. Earlier this year, Georgetown Law School drew criticism for its decision to suspend lecturer Ilya Shapiro for a tweet that raised questions about the qualifications of a Black woman to serve as a Supreme Court justice. After an investigation, he was reinstated but then resigned.

Similarly, a University of Central Florida professor was fired after he tweeted that Black Americans receive special treatment in universities’ hiring and acceptance processes. He, too, was investigated, fired for a pattern of “discriminatory harassment” and later reinstated.

Lonergan said he agrees Farage has a right to free speech and he hasn’t decided if he thinks the professor should be fired. But he argued free speech does not mean freedom from consequences.

Disclosure: University of Texas – Dallas and University of North Texas have been financial supporters of The Texas Tribune, a nonprofit, nonpartisan news organization that is funded in part by donations from members, foundations and corporate sponsors. Financial supporters play no role in the Tribune’s journalism. Find a complete list of them here.

Only one Texas Republican in the U.S. House voted to protect marriage equality