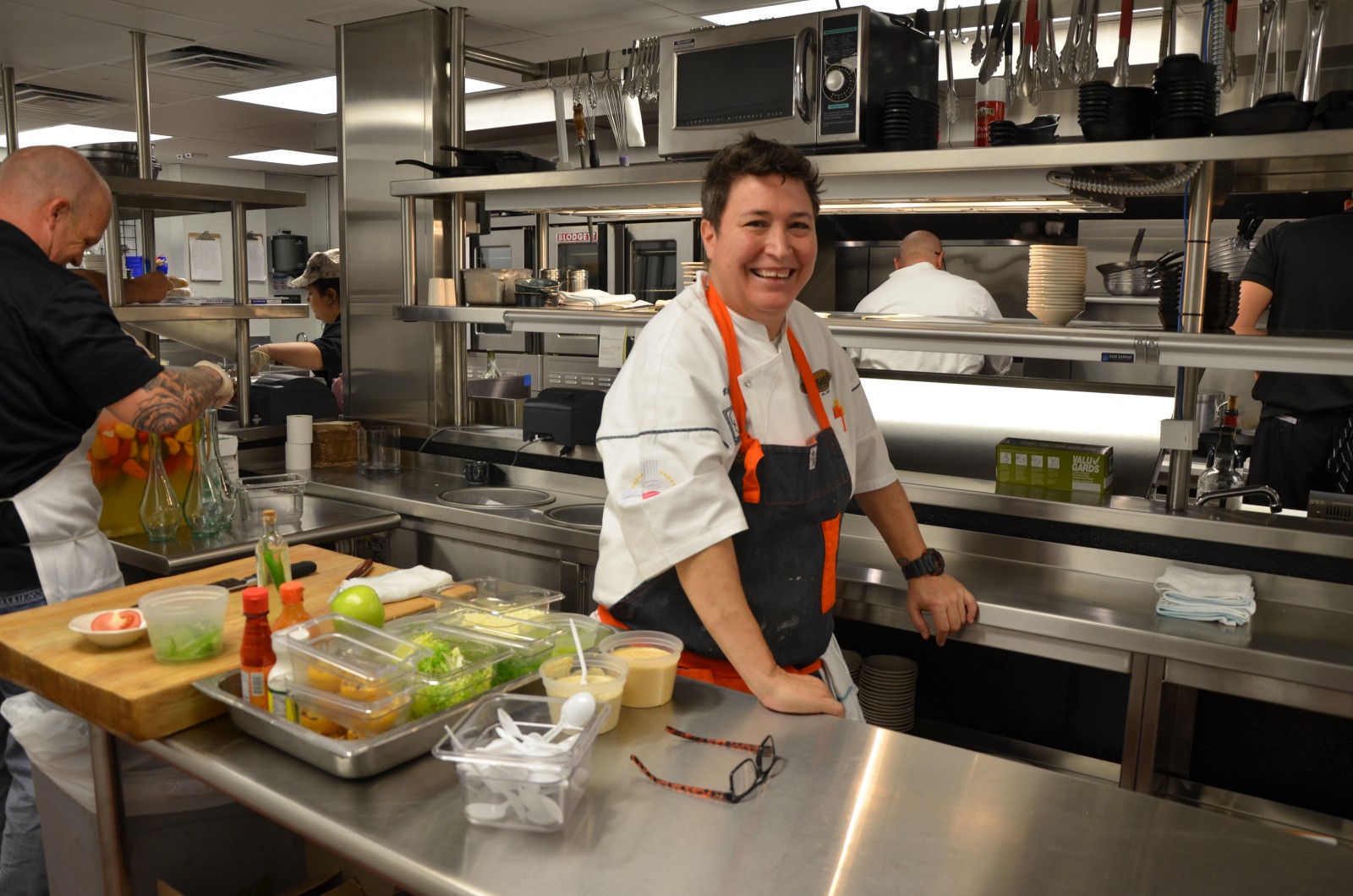 Chef Heather Nañez in the kitchen at Peggy's on the Green

Let’s stop short of using the term promiscuous (I’ll get flack anyway), but it is undeniable that chefs can be peripatetic, nomadic, quixotic at the very least — moving from place to place and kitchen to kitchen in order to scratch an itch, gain experience, garner a better paycheck … or to escape an intolerable boss. All perfectly valid reasons. But not Heather Nañez. Despite a confessed condition of serious ADD (“I can’t even watch a whole movie,” she says), she has remained at her current job for more than 13 years.

Nañez came to San Antonio from Laredo to study radio, television and film at San Antonio College but, like most students, needed to make some money. “I got my first job as a busser at Fratelli’s. I wasn’t good at the front of the house, but as soon as I got to the back, I was really happy. I fell in love with the guys in the kitchen and stayed a really long time,” she says. Sayonara SAC. Her first big move after that was to Grey Moss Inn. “I was scared to death but I had a blast, I got to do menus,” she says of her time there. “And I got canned after three years — right after 9/11.”

The next move was a truly big one — to upscale steak and seafood restaurant Bohanan’s, where she’s been ever since. They have kind of grown up together. “My first task was team building,” she relates. “Then doing wine dinners, opening a bar, getting involved in charity events, [being in on the establishment of] the San Antonio Cocktail Conference … I had a lot of leeway.” She also says that many restaurants may have “one or two good people, but we had a ton of them.” And in that ton were the bar guys largely responsible for initiating San Antonio’s cocktail revolution: Don Marsh, Jeret Peña, Chris Ware, Jake Corney … “I got interested in making tonic [syrups], bitters … I dove into one thing, then the next.” ADD will do that to you.

Nañez is still with the Bohanan’s group, of course; it seems unlikely that relationship will change any time soon. But she’s now got even more leeway in developing the new restaurant she and Mark Bohanan recently opened: Peggy’s on the Green in Boerne. The new restaurant has expanded on the space formerly occupied by the Limestone Grille in the historic Ye Kendall Inn. A former porch has been incorporated, a snazzy new patio and arbor have been built, and the kitchen, of course, has been massively renovated. It looks like every chef’s dream. “We let her talk to us,” she says of the building they “fell in love with.” (Must be easier to listen to a woman.) “You can’t just move a two-foot thick limestone wall,” she observes when discussing required changes. New ventilation alone was a massive chore, requiring the taking of valuable hotel space above the kitchen. There will be some steak at Peggy’s — named, by the way, for Bohanan’s mother — but the menu otherwise takes a more casual, “refined Southern” direction than that at Bohanan’s.  “We will let our hair down a bit,” says she of the cropped cut. In preparation, Nañez got to do some traveling around the South, a tour that included Florida, a stop at Husk in Charleston, South Carolina, a temple of the South-shall-rise-again culinary movement, and another at Olamaie in Austin — hanging out at the chef’s table, trying to find that “Southern palate.” Fortunately, this new direction is not a one-woman job, as front-of-the-house guy Shaun Kimmey is coming along, and she was able to hire a chef, Luis Arrizcorreta, with a lot of corporate experience. “I’m not good at the paperwork stuff,” she says, all the while admitting to a little separation anxiety from the mothership on her part and that of the come-along crew. She is apparently good at whipping a kitchen into shape, however. As for her kitchen command style? “I’ve mellowed as I’ve grown older,” she says. (She admits to being 40-ish.) “There’s no Gordon Ramsey-style shouting for me.”

But a little anxiety in the new space is to be expected. Despite the fact that Mark Bohanan and his family live there, Boerne is still an untested market. “It’s both scary and exciting,” she says. “We don’t totally know the audience yet, but we want to have a conversation with the community.” That conversation will happen over shrimp and grits and mac and cheese, to be sure. “I have a pork chop I’m really excited about,” she tells me. (It’s good to know that someone can still get excited over a pork chop.) And despite its proximity to San Antonio, Boerne still lacks a really good craft cocktail bar, so they will be bringing that as well — along with some bartender names those of us in the cocktail appreciation business have become familiar with. Dinner will come first; there will eventually be an extended brunch utilizing that new patio and arbor. And all menu items will take advantage of local products where possible. “It’s expected and a no-brainer,” she says — and, to this end she has already had a sit-down with Jennifer Fadel of nearby Bending Branch winery. “They’ve got some really good wines,” she says. These days, that’s expected, too. Shrimp and grits from Peggy’s on the Green

All of this will have taken about 14 months from start to open, and Nañez is clearly chomping at the bit to get started. There has been little down time. She had been in Boerne exclusively for the last two months when we spoke. So it’s no surprise that, when asked about what she cooks when off duty, she replies that “She who takes care of me [also takes care of that].” The caretaker is Lynn Harris, a full-time graduate student with whom she shares a house off 1604 near Blanco and Bitters. “She’s fantastic,” says Nañez, a big smile dominating her face. Apparently her cooking passes muster, too.

But I keep pressing: surely there’s a fantasy food you have always been wanting to master, I suggest — hoping to discover that she has a secret jones for fancy French sauces. Or, at the very least, an an unseemly obsession with Funyuns or Frito pie. But no. “We did have a good steak with roasted squash the other night,” she admits. “‘That was a really good steak,’ we keep telling ourselves.”

Which is why she’s been able to keep this job for going on 14 years — ADD notwithstanding.