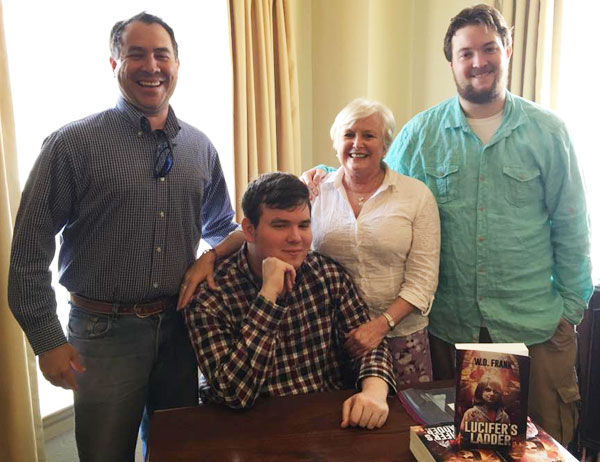 The choice of the Faust Hotel, which reportedly has the most haunted room in New Braunfels, was a fitting location for the event considering Frank sees himself a surrealist writer of “dark fiction” whose stories feature “violent and rebellious characters who are not afraid to oppose God himself.”

Frank says Lucifer’s Ladder was inspired by his lifelong obsession with Japanese role playing games, anime, and David Lynch movies, as well as his desire to see a story centered around the “bad guys.”

The book’s back cover offers this synopsis of Lucifer’s Ladder:

Hugh Aaron wakes in a post-apocalyptic Earth to learn that he has been chosen as a candidate for godhood by a mysterious entity known simply as The Elder. Soon Hugh finds himself alone in an unrelenting wasteland with the vicious servants of the messianic tyrant Yahweh hounding his every step. However, Hugh is not a damsel or a valiant hero, he is Lucifer’s Ladder, the Dark Messiah who will liberate demonkind from its shackles and overtake the misguided god who put them there. With the aid of his ancient spell book, Hugh will fight for the genocide of the angelic hierarchy, the resurrection of the human race, and the power to conquer reality itself.

In an interview with author Paula Shene on her blog, Frank says, “Sometimes the ideas just come from some sort of deep and unseen well of knowledge in my soul. When I become aware of an idea, I write it down and wonder how the concept in question could have possibly been born. I occasionally even know things that I shouldn’t know. It weirds me out!” In discussing Lucifer’s Ladder, Frank told Shene, “I also longed to see a story that featured a dark and ruthless protagonist like Hugh. Perhaps I needed to see him. I was struggling with a lot of darkness of my own at the time.”

While Lucifer’s Ladder is Frank’s first novel, he has also published a novella titled, Love, Guns and Rosemary, about a “brilliant yet chemically imbalanced gangster” and his girlfriend “a vicious and volatile enforcer haunted by the degrading memories of a helpless child.”