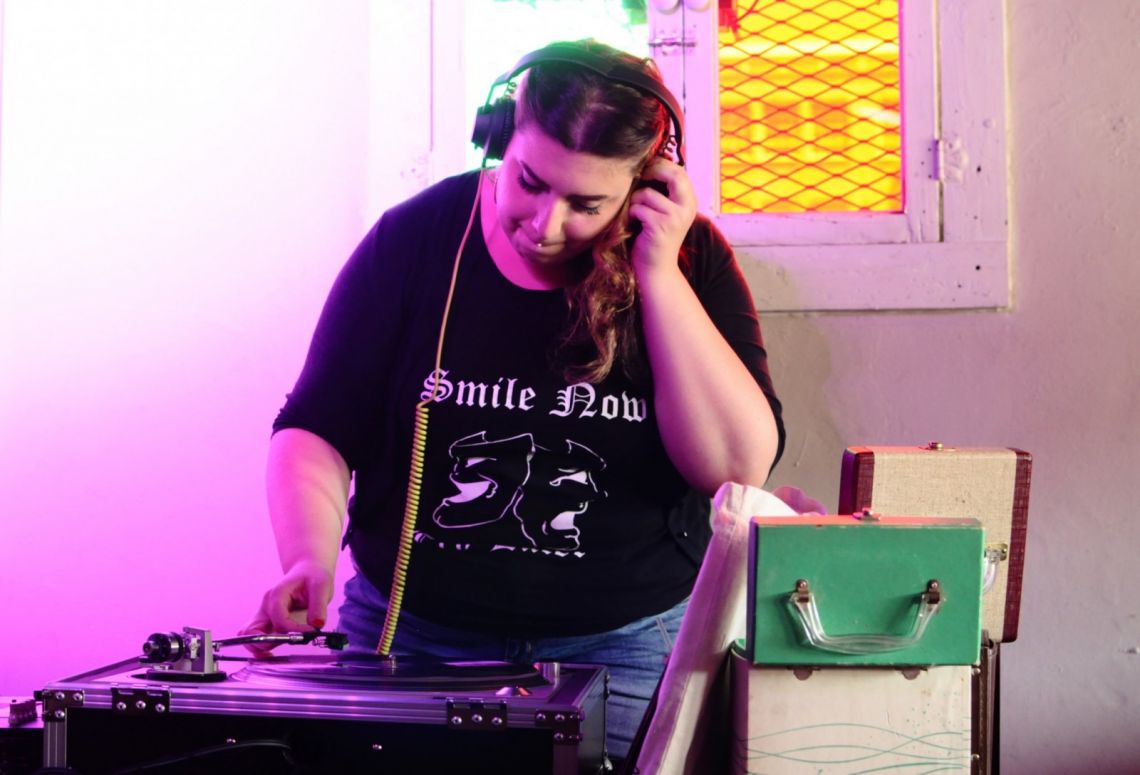 “I see this as a small-scale movement to bring girls to the front.”

When Claudia Saenz, aka DJ Tear Drop, went to her local record store to purchase Chicano Soul records, she kept noticing that she was the only woman in the store.

The club’s next SA gig will be spinning records for Échale! Latino Music Estyles, at the Pearl Amphitheater on Sunday, September 6.

The 27-year-old Austin resident lived in San Antonio for five years, and during that time her home away from the Rio Grande Valley started growing on her. She learned a lot about music and vinyl in those years, including the fact that males dominated the scene and industry.

In December 2014, Saenz did something about it, forming an all-female all-vinyl DJ club. In the ensuing months, the records and the music have been infiltrating the local community.

“We want to celebrate women who collect vinyl,” Saenz said in an interview at a coffee shop near her Austin base. “It needed to happen. We needed to empower women to get to the forefront. I see this as a small-scale movement to bring girls to the front.”

No experience is necessary to join the club; there are only two rules: The DJ must identify as a woman and must own vinyl records.

“Our first transgender woman approached me and I was happy that she did,” Saenz said. “She does soul music as well as hip-hop. She has a very large collection of vinyl and all kinds of genres of music.”

The club, nearing its first anniversary in November, currently hosts 15 members. And it’s already jumping state and regional boundaries. “We have had a lot of attention in California—there’s definitely a following there,” Saenz said.

But the group’s special sauce is seasoned with a direct connection to each DJ’s audience. “Every DJ set list is very personal,” Saenz said. “This is my own collection—so you truly cherish this piece of vinyl.”

SA resident Ann Marie Correa, aka DJ P. Cosita doesn’t specialize solely in spinning  vinyl, but she understands the cultural significance that the club brings. “I’ve been in San Antonio for 10 years,” Correa said. “I’m originally from Bryan-College Station, and I was immediately drawn to the music scene.”

The Chulita Vinyl Club connection led her on a musical journey while also reminding her of her past. “I had always had vinyl records from my grandmother’s and my mother’s side of the the family,” Correa said. “I grew up listening to Patsy Cline and Willie Nelson.”

But cumbia always stood out to her more than other genres of music. “To me, cumbia is home,” Correa said. “It reminds me of home. I live on the West Side and I hear the sounds of cumbia music. To me, it’s a big deal to be able to have that representation.”

Correa noted that with more venues welcoming different genres of music, there comes more attention, as well. “I have seen a big rise in it,” Correa said. “Everyone is more aware of this type of music.” And, she added, there were no female cumbia DJs in the scene. “Others would make requests for different artists, but no one had them.”

Fans (read: short for fanatics) of Fiesta Cornyation, know Jesse Mata as the mercilessly acerbic pen behind the emcees’ script,...