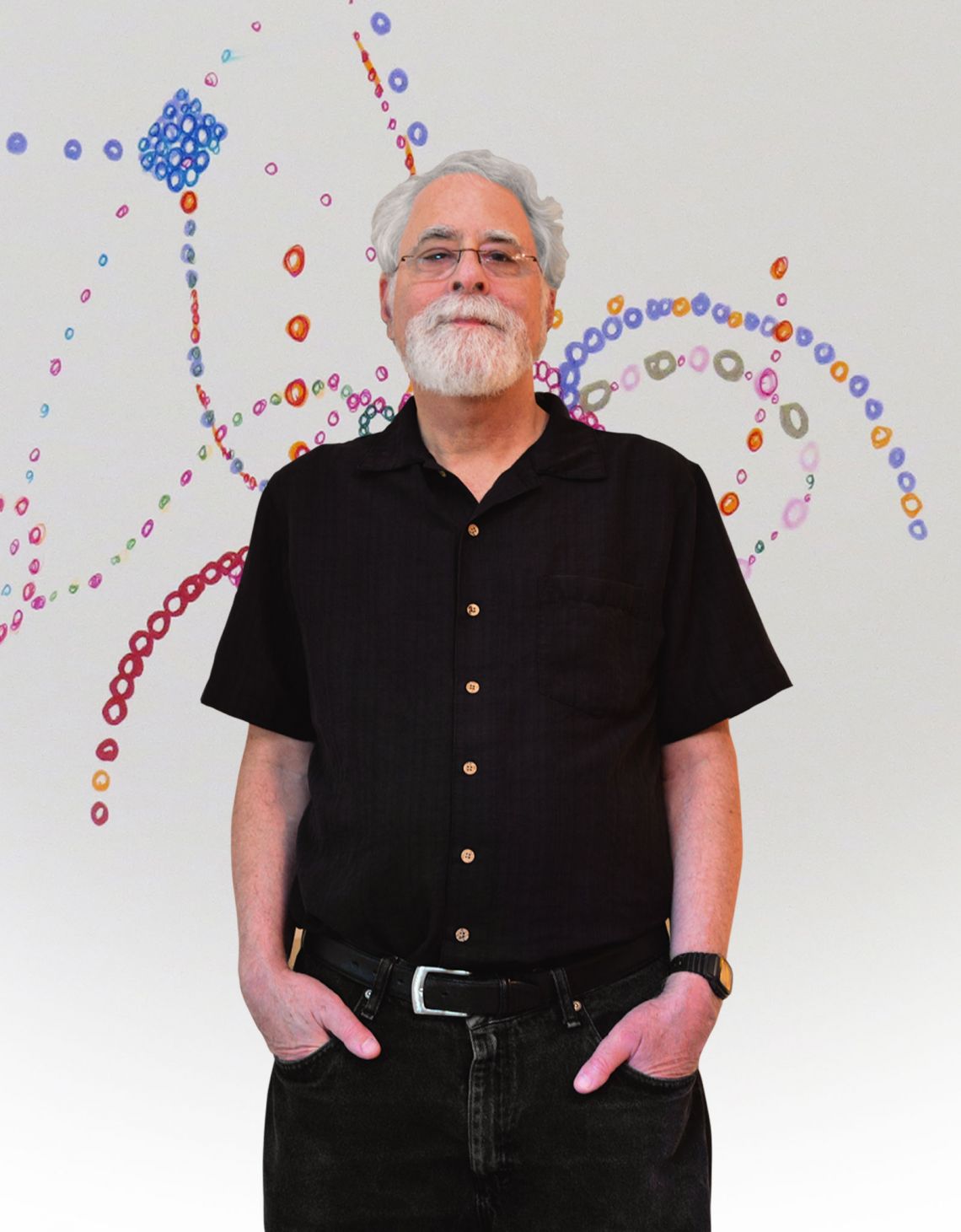 David Rubin came to San Antonio in the wake of Hurricane Katrina. He had made the decision to leave New Orleans in 2006 with a heavy heart. He had been the curator of visual arts at Contemporary Arts Center (CAC) since 2000, and still thinks of this tenure as his favorite. Rubin refers to the post as “the most invigorating and energetic that I had ever worked at.”

In addition to his work at the CAC, Rubin had another revelation while in New Orleans. He began to delve deeper into his own artwork. “I didn’t take my own art so seriously until New Orleans. The artists of New Orleans celebrated my work. One bought me a sketchbook with better paper than I had been using.” It so happened that Rubin curated a show with the famed abstract expressionist painter Al Held and decided to show the artist his own art.

“He just loved them. A great master validated me in my own eyes. That’s why I continue my drawing practice alongside everything else that I do. He told me I was doing a good job.”

After the hurricane in 2005, things had changed radically. There were massive layoffs and serious water damage to the CAC. There was no budget and the rather ambitious shows Rubin had in the works were scuttled. The city was immersed in the mission to rebuild New Orleans. “By this time, I was in my 50s, deep into my career, and this was just one of many places I had worked — and it was, quite frankly, the best job I ever had. CAC was a multidisciplinary institution with a supportive visual artist base, community-oriented, and I had tremendous creative freedom. What I was able to offer was a perfect fit for the place. Katrina put the kibosh on all that.”

After a year of the chaos wrought by the storm, Rubin realized it was time for a change. He found his answer in the form of a job offering posted on the College Art Association bulletin board. Rubin was very familiar with many of the key artists in the San Antonio Museum of Art collection mentioned in the job description, and he was also somewhat familiar with the city and its artists.

“While I was at the Phoenix Art Museum, I was charged with curating the four-state 1998 Phoenix Triennial. I made more than 200 studio visits across the Southwest, and visited every major city in Texas including San Antonio in 1997.”

Beverly Adams, who had previously been with SAMA, was also at Phoenix at the time and was able to make artist recommendations, as did Alexander Gray, who was then director at Artpace. Rubin and an intern combed through hundreds of slides, deciding which studios to visit.

Rubin has fond memories of the artists he met during that first trip to San Antonio. “I remember a great dinner with Nate Cassie at Liberty Bar, and there was a rooftop party at Artpace where I met David Zamora Casas. Connie Lowe, Ken Little, Hills Snyder, and the now deceased Alex De Leon stick out in memory.” Ultimately, there was only one artist chosen from each city for the Triennial, and that San Antonio artist was James Cobb. “He was the one. He still is.”

Rubin reflects that, “What I learned from that trip in 1997, was that San Antonio was a vital artist city. New Orleans was exceptional in that way, and I had a sense that San Antonio would be similar.” Rubin continues, “I am a curator that gets inspired by artists. I need that and I am an artist myself. It’s like a magnet. I like working with artists and being with artists.”

Rubin was brought into San Antonio as a disruptor in 2006. “When I interviewed for the position, one of the committee members told me that there was a critical mass now in San Antonio, and it was time to launch contemporary art. What I came away with was that they were offering an opportunity. Contemporary had been kind of sleepy at SAMA and they wanted me to do what I always do and stir things up — make things exciting. I don’t know what my references told Marion Oettinger (Kelso Director of SAMA, 2005-2011), but I am sure this is one of the reasons I was hired.”

Rubin elaborates further, “I was known as the kind of curator who would get out into the community, look at the shows, visit the studios when I could — because there is never enough time. My interests were a good fit for where the museum was at that point. It had been a weak department and they wanted to strengthen it.” He was hired as the Brown Foundation Curator of Modern and Contemporary Art and was there for seven and a half years.

Rubin is very proud of the work he was able to accomplish at SAMA and speaks very highly of the team he worked with. “There was a nice camaraderie between the departments. The curatorial team was really stellar. Jessica Powers, who is still at the museum, is terrific. John Johnston was a wonderful colleague along with Nancy Fullerton. It was a nice place to work.” David Rubin, The Spider and the Fly

High points for Rubin include the acquisition of works by Kehinde Wiley and Iván Navarro. “These are great works of art. They will stand up to the test of time. They have an art historical and a cultural significance, and they are beautiful to look at.” SAMA’s 2010 exhibition “Psychedelic: Optical and Visionary Art since the 1960s” was also a major landmark in terms of scholarship and publication. “The catalogue became a best-selling book and was reviewed favorably in The New York Times. To see people lined up outside the museum for several hours to attend the Alex Gray conversation was great. Many of those were young people. I don’t know that I had reached millennials that way before.” Rubin continues to be proud of the shows he generated for Fotoseptiembre, San Antonio’s annual photography festival. One stand-out was “Danny Lyon: The Bikeriders,” winner of the Peoples’ Choice award in 2013. He feels deeply about the wonderful artists he has worked with here, and the SAMA Contemporaries trips he organized, particularly the journey to Washington D.C. This was the David Rubin that I came to know. Always in black with a distinctive shock of white hair, Rubin was at every opening. He tirelessly navigated every gallery, seeking connection with artists and art aficionados alike, his nervous energy always palpable.

“So, I have no complaints about what I accomplished there [at SAMA]. It was a good ride. I recognize that I did the job I was there to do. It is not uncommon in museums and institutions of that nature, that when the job is done and the need is fulfilled, the powers that be decide it is time for a regime change. New needs surface — and I am totally at peace with that.”

The past several years have been a time of reflection and growth. “It’s not the first time in my career that I have had to reassess and reevaluate where I am at in that career. Anyone with a long and productive career will face that from time to time.” After a moment’s thought, he elaborates further. “Happenstance has always played a role in my life. I’ve always loved Max Ernst’s phrase, ‘The Blind Swimmer.’ It means going through life fearlessly not fearing the future. I was in the position of being the blind swimmer again.” There is one particular reflection that is very prescient for our times. “In terms of the different cities I have worked in, I have now worked with two majority Latino population cities, and two majority black populations cities: Cleveland, Phoenix, New Orleans, San Antonio. If anyone has had an opportunity to work with diverse communities and communities that really need our support at this political moment, I have. I’ve had that opportunity.”

He also looks back on his youth, hearing the Reverend Martin Luther King speak at Temple Israel of Hollywood as a 15-year-old. Two years later, he attended a leadership training conference at B’nai B’rith Camp. “About a dozen other kids and myself sat on the floor and listened while Elie Wiesel spoke to us about the Holocaust. He reminded us that we must never forget. As a teenager, I think it was incredible to be exposed to these great leaders.”

As a curator, Rubin has tried to maintain a commitment to socially relevant art. “I gravitate toward art that is about who we are and how we can be better — art that helps us understand the human race. And I celebrate art that is beautiful.”

He credits his training at Harvard’s Fogg Museum in the connoisseurship program, which has been widely left behind in favor of new scholarship that favors theory over the object. “Now, theory is put above the object. To me, it is all about the object and how we relate to it … empathy … what it feels like to be what you are looking at … the experiential aspect of the art for the viewer … how we relate.

“I am entering that important transitional moment in anyone’s life when I am a senior citizen. That moment when everyone starts being younger than you are. And you think, ‘How do I keep my youth?’ By being creative … by being active … by keeping my intellectual juices flowing. But first and foremost, by tapping my creativity and continuing to serve. And how do I do that? I serve artists.” As Rubin prepares to take his leave from San Antonio, he finds himself doing a great deal of writing. “I wrote for Arts Magazine and Art in America in the ’70s and ’80s, but gave that up when I reached a certain level in my curatorial career that took precedence.” Now he contributes as one of a small handful of editors to Bill Lasarow’s Visual Art Source. He has also written about 30 essays for Glasstire, which opened a door for him. “I felt there were still so many San Antonio artists whose work had not been properly documented. There’s a lot of great art here.” There is talk of finding a sponsorship to compile those essays into a book. Independent essays are also taking more and more time.

He has struck up an excellent relationship with Carole Sorell. “Carole needed curatorial help with getting an exhibition of Salvador Dalí book illustrations off the ground. Our plan is to organize a national tour of two portfolios — the early Le Chants de Maldoror and the much later Divine Comedy.” Together, they make for an interesting comparison: “Life and Death in the Visions of Salvador Dalí.” The comparative study is a great fit for university and college galleries as well as museums, and Rubin has hopes of placing it in San Antonio.

“Los Angeles is my hometown. I got my start as a curator there at Scripps College and it was a transformative period. It was an exciting time in L.A. MOCA wasn’t even built yet, but we were talking about it. This is a full circle and it’s all in the numbers. I left at 34, and am now turning 68. Two 34-year cycles and it is now time to make a new adventure … I am excited about new challenges and reconnecting with old friends and new friends, as well. I tell people that David the Younger is coming back as David the Elder. And I can’t wait. San Antonio has been a great love affair. But in the words of Stephen Stills, now it’s time to change partners.”

San Antonio native and actor, playwright, director Adelina Anthony premiers her newest film this month as part of the 2017...