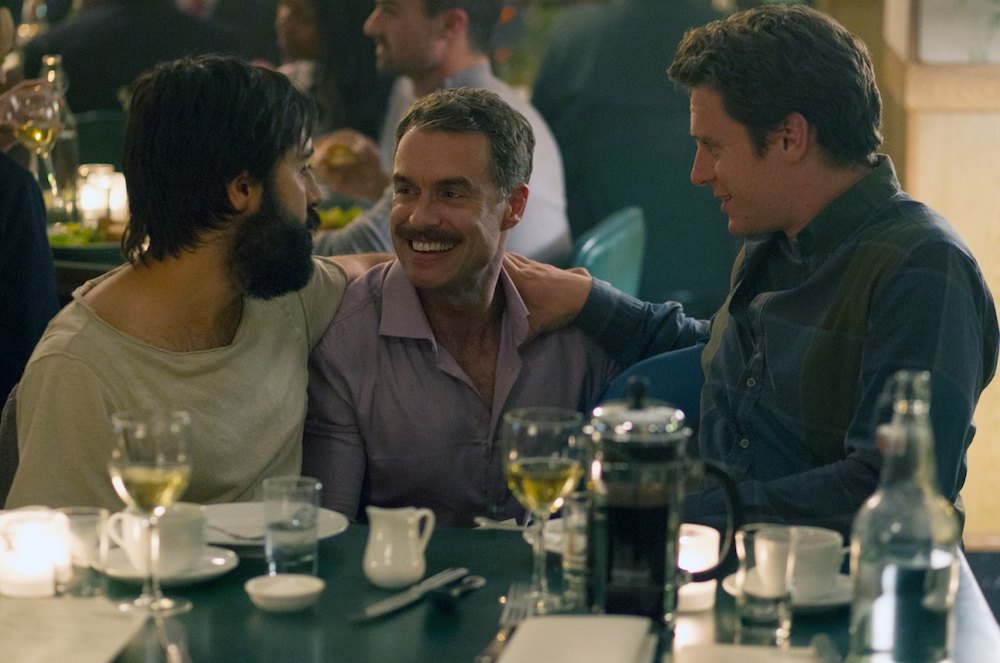 Dom, played by Murray Bartlett, is one of the highlights of HBO's Looking.

HBO’s Looking is worth a second look, particularly if you’ve heard the buzz about last year’s terrible first episodes—the epitome of Bad Gay Art. Roughly modeled on such socio-sexual buddy series as Sex and the City and Entourage, Andrew Haigh and Michael Lannan’s project puts an oh-so-gay spin on things, dragging this now well-worn subgenre into the land of lavender.

The first two episodes, however, couldn’t be more regressive in their look at the realities of gay male life in America: clichés abound, from the locale (San Francisco: really?), to cruising in parks (an experience blithely mentioned on a blind date: who would say that?), to the brittle banter most usually associated with early gay art like Boys in the Band. It reaches—or plummets?—to its nadir in the second episode, “Looking for Uncut,” in which the WASP-y protagonist, Patrick, beds a Mexican-American, Richie, because Patrick has never before assayed the rich, tangy glories of uncircumcised cock. (It’s hard to know where to begin in analyzing this stupid story arc. I actually remarked to my viewing buddy that surely the creators wouldn’t be so moralizing and tone-deaf that they would reveal that Richie is actually (horrors!) circumcised. But, yep, it turns out, dear readers, that all Latinos aren’t the same. Who knew?) To make matters worse, Patrick actually mentions to Richie–during fellatio–that he’s “disappointed” in Richie’s snipped foreskin. And have I yet mentioned that Patrick is dumb as a bag of hammers? That particular point bears repeating.

It was thus with a heavy heart, and propelled by profound self-loathing, that I powered through the next couple of episodes, which deepened (thank god) the characterization of clueless Patrick (played by Broadway vet Jonathan Groff), and expanded on the lives of his two amigos: the frustrated Cuban-American artist Augustín (Frankie J. Álvarez) and the fantastically mustachioed Dom (Murray Bartlett), a Daddy type eking out a career as a waiter. Since the series couldn’t go anywhere but up after the shocking reveal of Richie’s circumcised schlong—a cliffhanger for the ages—it indeed gets better, veering between farce (for instance, a leather celebration gone awry) and social drama (as Dom, in the throes of mid-life crisis, dreams of opening his own restaurant). Two new characters inject badly needed blood into the narrative: Patrick navigates a possible office romance with his boss (played by handsome, talented Russell Tovey of History Boys fame) and Dom strikes up a complicated relationship with a wiser, older gent, a throwback to the heady days of San Fran’s first flirtation with liberation (Scott Bakula).

But it’s the fifth episode—the midpoint of the series—that makes Looking finally worth looking at. “Looking for the Future” completely breaks the mold of the show: it simply follows one courting couple—Patrick and the freakishly circumcised Richie—on a long date’s journey into night. In this respect, it resembles Haigh’s breakthrough indie film Weekend, which likewise sketches an extended date between two blokes. “Looking for the Future” is everything that Looking generally isn’t: it’s subtle, graceful, unhurried, and—this is the important thing—honest. It’s the closest the show comes to a looking glass. As I pen this review, the marriage-equality movement roils these (not particularly) United States, with predictable lamentation and teeth-gnashing about “tradition,” and “change,” and endless fulminating about the “long-term ramifications” of gay marriage, as if gay marriage, or gay relationships, were a completely different animal from any other type of relationship. The power of “Looking for the Future” derives, paradoxically, from its sweet banality. Here, gay courtship—and by implication, gay marriage—looks exactly like any other romance or union: breakfast, walks in the park, metro rides, a fun day trip to a local joint. And, yes, there’s sex, but it’s interwoven into the fabric of dating, just like sex really is between, well, anybody.

As Looking looks towards its second season—premiering January 11, 2015—the producers need to make some alterations to the series’ basic formula. By the first season’s finale, the character of supposed “best friend” Augustín had become so bitter, poisonous, and unwatchable that it would be a mercy if he were written off the show altogether. (Something specific to the Bay Area would be lovely. Stranded on Alcatraz? Devoured by sea lions?) That would free up time for Dom, a far more interesting character and a far more intriguing idea: the common struggles of midlife refracted through an aging, touchingly distraught gay guy. The I.Q. of Patrick needs to be raised by a few dozen points, even if his incurable stupidity remains the engine of the show’s comedy. And Dom’s roommate (and ex-lover) Doris requires more screen time: Lauren Weedman pretty much steals every scene she’s in, giving us a look into how true friendship, and true love, operates, even outside of the context of sex and circumcision. If the producers can fix these flaws—and I’d like to look at the glass half-full—then HBO might have a real winner in the sophomore season of Looking.