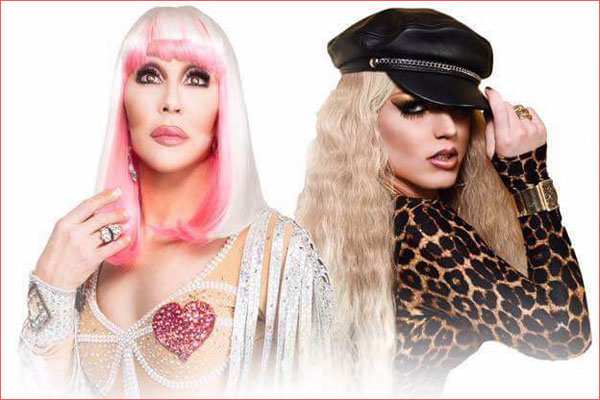 Rey Lopez Entertainment will bring together Chad Michaels and Derrick Barry for a show at the Aztec Theatre. (Courtesy photo)

In the age of RuPaul’s Drag Race, it’s not uncommon for celebrity impersonators to be mistaken for the actual performers who inspire their acts.

That awkward moment happened to Chad Michaels in 2009 when People Magazine mistakenly used a photo of the drag star for a spread on the iconic pop star Cher.

Similarly, drag star and Britney Spears impersonator Derrick Barry once revealed to the Daily Mail: “People are convinced I am the real Britney when they see me . . . And even when I’m not wearing make-up, people say we are alike.”

Rising to fame after their appearances on RuPaul’s Drag Race, both Michaels and Barry established themselves as the top Cher and Britney Spears impersonators respectively and became fixtures on the Las Vegas strip.

Rey Lopez Entertainment will bring together Michaels and Barry for a show at the Aztec Theatre on August 4. Here’s a rare chance to see two top-notch entertainers all for the price of one.

On August 2, the Governance Committee of the San Antonio City Council will begin the initial discussion of whether to...