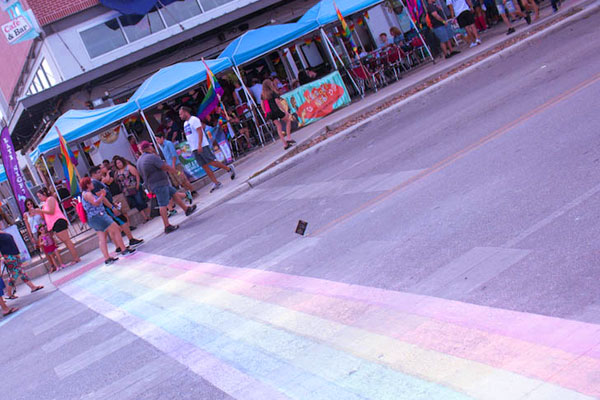 On July 1, the day of the Pride festival and parade, a group of volunteers painted a set of rainbow crosswalks in chalk on Main and Evergreen avenues. (Photo by Juilan P. Ledezma)

On August 2, the Governance Committee of the San Antonio City Council will begin the initial discussion of whether to allow the installation of permanent rainbow crosswalks on the Main Avenue Strip at the corner of North Main and East Evergreen avenues.

Approval by the committee is the first step before the measure can be submitted for a full City Council vote.

Shaw, Saldaña, Sandoval and Treviño along with Councilwoman Rebecca Viagran serve on the Governance Committee which is chaired by Mayor Ron Nirenberg.

“The Main Avenue Strip has been the center of the LGBT community in San Antonio for decades,” Treviño wrote in his proposal. “It is the home to many LGBT owned businesses and the site of the annual Pride Parade. The addition of this crosswalk will affirm San Antonio is a place of acceptance and equality.”

On July 1, the day of the Pride festival and parade, a group of volunteers organized by attorney Rosie Gonzalez painted a set of rainbow crosswalks in chalk on Main and Evergreen. The move was widely hailed on social media.

Ahead of the Governance Committee meeting, Mike Frisbie of the city’s Transportation and Capital Improvements department sent the committee an Agenda Memorandum in which he recommends not painting the crosswalks, suggesting they are unsafe.

“For safety reasons, TCI does not recommend or support any permanent art installation on crosswalks, or within traffic travel lanes as visual changes can create a distraction and safety hazard for motorists, bicyclists and pedestrians . . . ” Frisbie said in the memo.

However, Deputy City Manager Peter Zanoni told the San Antonio Express-News that the city manager’s office will recommend the city move forward with the crosswalks as a pilot program, citing that nine other U.S. cities, including Houston had similar crosswalks.

Treviño told the Express-News he believed he had the necessary votes on the Governance Committee to approve the proposal.

By Alexa Ura, The Texas Tribune July 31, 2017 Though he tries to avoid restrooms “at all costs,” high school...