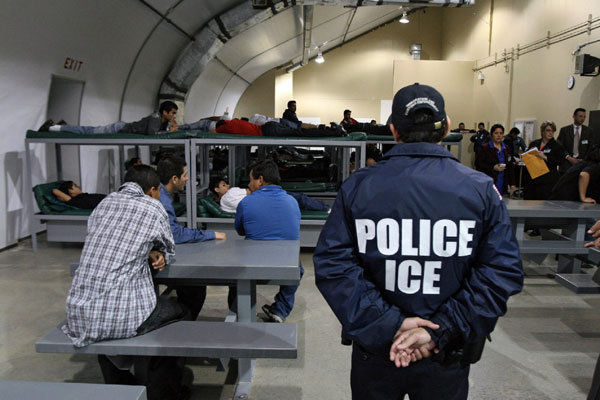 U.S. Representative Lloyd Doggett (TX-35) is voicing his concern about the sexual abuse of LGBT immigrants who are in Immigration and Customs Enforcement custody. Doggett, along with 34 of his colleagues in the House, wrote a letter on June 23 to Department of Homeland Security Secretary Jeh Johnson, urging DHS to use “existing discretion” on LGBT individuals in order to ensure their safety.

The congressional response is prompted by evidence which shows vulnerable people in ICE detention centers, especially trans women, are often victims of sexual abuse while detained.

“As we further the rights of LGBTQ people in this country, we must not forget of our LGBTQ immigrant community who continue to be disproportionately affected by abuse, including sexual assault, while in immigration detention,” Carlos Padilla, program coordinator of United We Dream’s Queer Undocumented Immigrant Project, said in a statement.

“Today’s Congressional letter urging DHS Secretary Jeh Johnson to act swiftly and decisively on behalf of transgender women and other LGBTQ people currently detained is a step in the right direction, and we encourage more Members of Congress to push for the end of LGBTQ detention,” Padilla added.

“Such abuse is intolerable and we are seeking answers to ensure it stops,” Doggett wrote in an email to his constituents.

Following is the letter to Secretary Johnson.

We write to express our concerns regarding the circumstances surrounding lesbian, gay, bisexual and transgender (LGBT) immigrants who are held in detention centers under Immigration and Customs Enforcement (ICE) custody. These individuals, particularly transgender women housed in men’s detention facilities, are extremely vulnerable to abuse, including sexual assault, while in custody.

We understand the Department of Homeland Security (DHS) and U.S. Immigration and Customs Enforcement (ICE) have had conversations with LGBT immigrant advocates and community members for some years now in order to find a solution to this pressing situation. Recently, ICE
formed a working group to review placement and safety issues for LGBT detainees and will be issuing recommendations for DHS’ consideration in the near future. As you review these recommendations, we strongly urge you to use existing discretion to release LGBT individuals from custodial detention and use parole or alternatives to detention to ensure the safety and appearance of this group throughout their immigration proceedings, such as supervised release and community placements, unless there are extenuating circumstances.

Detention should almost never be used for vulnerable groups such as LGBT immigrants facing immigration proceedings. Recent surveys of jails and prisons by the Bureau of Justice Statistics (BJS) found that non-heterosexual detainees experience sexual assault at up to ten times the rate of heterosexual men. The situation is starker for transgender detainees’. According to the BJS survey, one in three will be sexually abused within twelve months in custody. When viewing the trend of reported sexual assaults against this community in immigration detention, the Government Accountability Office in November 2013 found that transgender immigrants reported 20% of sexual assaults in ICE custody. This is deeply troubling given the fact that transgender individuals are estimated to be less than 1% of the general population.

ICE’s own intake system recognizes the risk LGBT immigrants face in detention and says they can release LGBT immigrants 70% of the time, however ICE officers consistently override this and use their discretion to detain anyway in 68% of those cases. A recent study conducted by the DHS Office of the Inspector General found that ICE overrode explicit Risk Classification Assessment recommendations in 7.6 percent of cases for the general population and in 19 percent of the cases for LGBT detainees.

ICE policies for years have recognized that LGBT immigrants, particularly those who are transgender, are in dangerous situations while detained, including DHS’s Prison Rape Elimination Act (PREA) Standards. However, we understand that there has been no clear PREA
implementation plan to date with respect to this population. This has led ICE to routinely segregate transgender women in men’s facilities in order to keep them safe, including the use of isolation and “GBT pods,” the latter being used more frequently in recent months. ICE must apply discretion to ensure that vulnerable populations are not subjected to an unacceptably high risk for sexual abuse.

We respectfully urge DHS and ICE to end the practice of detaining vulnerable groups such as LGBT immigrants. We believe ICE should consider an LGBT person’s detention as “not in the public interest,” per your enforcement priorities memo of November 20, 2014, due to the extraordinarily high risk of abuse in detention. Finally, we request DHS and ICE engage LGBT and immigrant civil rights groups to develop additional community-based alternatives to detention, for vulnerable populations. To address the concerns raised above, we have questions regarding ICE’s protocol for LGBT detainees:

1. What factors do ICE officers use to decide whether they will overrule the RCA’s recommendation or choose detention in the absence of an RCA recommendation when an immigrant has a special vulnerability such as LGBT status?

2. What steps has ICE taken, or will ICE take, to ensure that officer use discretion appropriately to keep vulnerable LGBT persons out of detention centers whenever possible?

3. What action has DHS taken, or will DHS take, towards effective oversight to ensure that ICE uses its discretion appropriately to keep vulnerable LGBT persons out of detention centers whenever possible?

We urge you to act swiftly to address these issues. The safety and security of many individuals depend on it. We look forward to collaborating on this pressing matter.

What you’ll need to get married in TX

We asked our sister pub the Current for a get-me-to-the courthouse-on-time checklist and they quickly obliged: Bexar County Clerk Gerard...