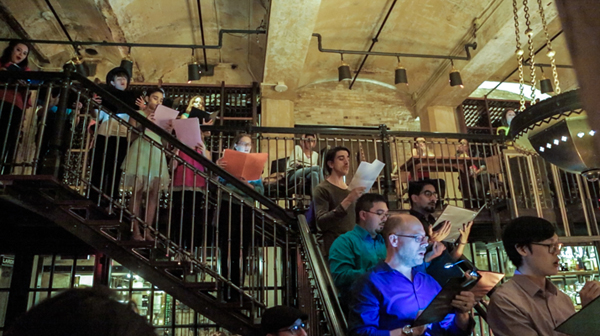 Composer Nathan Felix is leading his new project, a choral group dubbed From Those Who Follow the Echoes to the McNay Art Museum for a performance on June 1.

The group, which made its debut at Hotel Emma back in November, has been raising eyebrows by performing in unexpected venues in an attempt to bring choral and classical music to the masses.

In March, the group helped kick off Contemporary Art Month with a performance at the Blue Star Contemporary Art Museum. Here, group members performed along the gallery walls making little distinction between themselves and the viewing audience.

“I want to break down that barrier between the stage and audience,” Felix recently told Out In SA. “I want people to feel that we are all the same and part of the same community.”

Felix, a self-taught composer admits he never really cared for classical music until late into his adult years. It was during a tour with his former punk band when he decided to tune the radio to a classical music station. “Everyone fell asleep but I started listening to it,” Felix said. “When I got off tour, I immediately knew I had to go in a different direction.”

Today, the former punk rocker hopes to share his love of classical music with those who are least likely to encounter it. In 2016, he took his “classical music keggers” throughout the state of Texas where he would then donate used pianos to public schools in need.

For Felix, From Those Who Follow the Echoes is just one more way to change public opinion about classical music and a way to reach a greater audience.

“I feel classical music is a different way to open up your mind,” he said. “Classical music has evolved and we have evolved also. I think it can be really fresh if you know where to find it and listen to it.”

Three iconic divas are making their way to the Alamo City this summer. Patti LaBelle - Live To a younger...