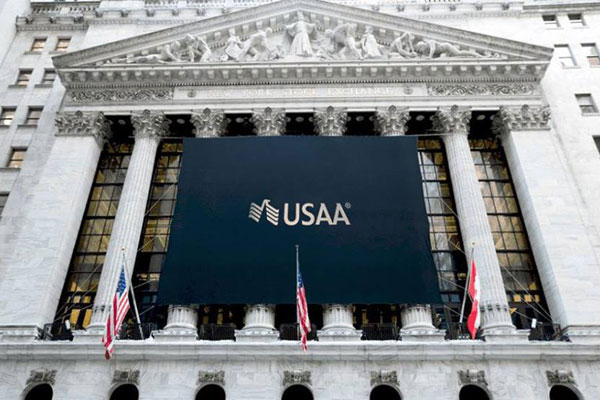 A USAA banner graced the facade of the New York Stock Exchange earlier this year. USAA received a score of 100 on the 2018 HRC Corporate Equality Index. (Photo via Facebook)

The Human Rights Campaign Foundation released the results of its 2018 Corporate Equality Index on November 10. Of the seven companies ranked in San Antonio, two companies, the United Services Automobile Association (USAA) and Rackspace received a score of 100.

This is the second year in a row that USAA has received a perfect score. In the 2016 CEI, it received a score of 85. The company has been providing financial products to military members and their families for over 90 years.

Rackspace’s score of 100 represents the first time the company has participated in CEI survey. It is a managed cloud computing company based in Windcrest. Like the last two years, H-E-B, which is considered a good place for LGBT employees to work, came up short in several categories:

This year, a record-breaking 609 businesses earned the CEI’s top score of 100, up from 517 last year. The survey also found that gender identity is now part of non-discrimination policies at 83 percent of Fortune 500 companies, up from just three percent in 2002.

“At a time when the rights of LGBTQ people are under attack by the Trump-Pence Administration and state legislatures across the country, hundreds of top American companies are driving progress toward equality in the workplace,” HRC President Chad Griffin said in a statement. “The top-scoring companies on this year’s CEI are not only establishing policies that affirm and include employees here in the United States, they are applying these policies to their operations around the globe and impacting millions of people beyond our shores.”

This article was updated to include Rackspace’s score.