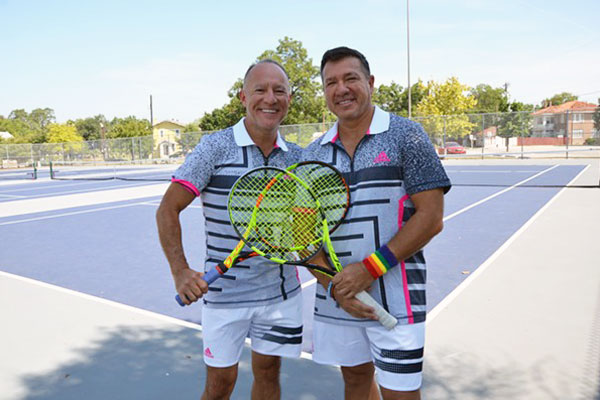 “We hope to come back with a gold medal,” realtor and fitness instructor John Barrera tells me on the Brackenridge High School tennis courts. “They’re very nice,” chimes in Barrera’s doubles partner, Pablo Cruz, who’s worked as an AT&T project manager for 25 years and counting.

Rightfully giddy with excitement, the two University of Texas at San Antonio alums are gearing up for the 10th edition of the Gay Games in Paris (August 4-12), where they’ll compete against players from across the globe – donning custom-made, accessorized outfits, no less. With an air of confidence, Barrera adds, “We’ll make it to the finals, so we’ll play five days.”

Barrera, a Houston native who grew up on the courts but took a 16-year hiatus from tennis, and Cruz, a tennis newcomer from the tiny Rio Grande Valley town of Roma who served in the U.S. Navy and entered San Antonio’s gay sports arena via Diablos Outsports, have been playing together for two and half years as part of the Tennis Club of San Antonio (TCSA), a proudly “all-inclusive” nonprofit organization launched three years ago.

“I would say probably half our members are heterosexual,” Barrera says of TCSA’s membership, which has grown from roughly 20 to 125 individuals encompassing everyone from “beginners who’ve never held a racket to advanced players.”

Beyond weekly tennis socials and its annual Alamo City Tennis Classic tournament in April (certified for the last two years as a “Masters Series” by the Gay and Lesbian Tennis Alliance), TCSA prides itself on giving back to San Antonio’s LGBTQ* community. “We give to Thrive Youth Center [and] the San Antonio AIDS Foundation,” Barrera explains. “We gave four scholarships out yesterday: one for $1,250, one for $1,000, one for $750 and one for $500 to four students — one from Clark High School, two from Brackenridge High School and one from Health Careers.”

In anticipation of their athletic adventures in gay Paris, we quizzed the dynamic duo about their competition strategy and what else they have planned in the City of Lights.

What does it take to get into the Gay Games?
JB: Well, you have to quickly apply, as I’ve learned. Tennis and golf are the first two sports to sell out. There are really no requirements. It’s a diverse group of people: You can be gay, bisexual, transgender, asexual or heterosexual. For example, we’re playing together and we’re both gay. But Pablo’s husband will be playing sand volleyball, and his partner is straight and married. So it’s a very diverse culture of athletes. I would say the vast majority will be gay, [and] there are 36 different sporting events. We’re playing singles and doubles. We’ll be playing on red clay there in Paris. You’re ranked according to the United States Tennis Association and GLTA because it’s a GLTA-sanctioned event. We’re both in the C category and we’re also playing in the over-50 division. So we’re doing this for the first time ever, because we typically play at our level in tournaments throughout the United States. So this’ll be our first time to play over 50 at an international tournament.

Do you have any particular strategy in play?
PC: We’ve always had the mentality [that] we have nothing to lose. And when we take that mentality, we’ve won tournaments we weren’t supposed to win. We’ve taken the first, second and third seats out.
JB: We play aggressively. We communicate well on and off the court. And when one of us is not playing at our best level, the other one motivates you to really kick it in. So we understand each other’s chemistry on the court. There are times when we communicate. We talk. We’ll say, “Reset.” We’ll mention our tennis coach Leo [and] remember to follow through.
PC: So we’re very supportive where we’ll see other doubles team members fighting within themselves.

Tell me about the custom shirts you ordered.
JB: We’ve got a couple of custom shirts being done. One is being done locally. It’s a white T-shirt that says “Love” and the “O” will be a tennis ball. Underneath that blue logo of “Love” will be “Paris Gay Games” in red letters and then on the sleeve we have “First Serve Tennis,” who sponsored us. They’re a local tennis store in Castle Hills. We also have another Lacoste shirt that will arrive while we’re in Paris, which is a white polo. The big alligator is the United States flag.

You mentioned you’d be competing in diamond tennis bracelets?
JB: I haven’t told Pablo about this [laughs]. So Joseph Torres and I were talking a couple of weeks ago, and we thought it could be a new trend to set for gay men — or straight men — to start wearing women’s tennis bracelets. So I’m going home this weekend, and my mother has four of them. And I’m getting one of them, and I’m wearing it in Paris.

So Pablo has to find one now.
JB: Yes [laughs].
PC: You know, he’s very [fashion-conscious]. And I’m more like, just put whatever shirt on and just go.

What else do you guys plan to do while you’re in Paris?
JB: This is my second time in Paris … I love doing tourist stuff. He and his husband have never been so I’m going to do touristy things with them — go to the Eiffel Tower, the Louvre, museums, biking, a boat ride on the Seine.

Anything else you’d like to add?
PC: There will be opening ceremonies just like in the Olympics. Within the United States, every state is represented. So the Texas folks will have a specific shirt with Texas and U.S. flags.
JB: Except for us. We’re actually wearing one of our custom shirts. We’re not wearing what everyone else is wearing. It’ll be a surprise. You have to stand out somehow.

The board of directors of Fiesta Youth this week announced they will be marking the organization's fifth anniversary on September...