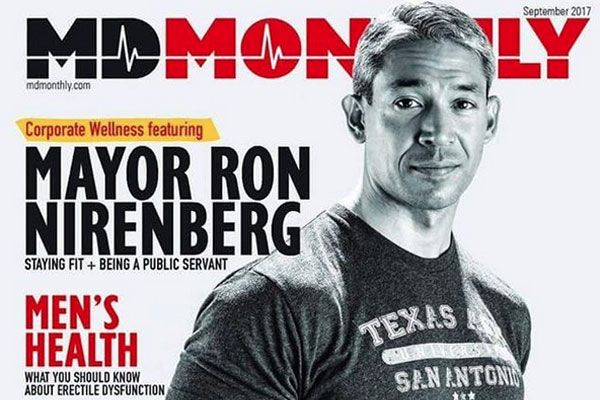 We’re not sure how we missed this (it probably got pushed down our news feed in the aftermath of Hurricane Harvey), but y’all have to see this magazine cover. Why? Oh, because Mayor Ron “Zaddy” Nirenberg is on the cover, y’all.

First off, it’s pretty cool that our former-bodybuilder mayor was on the cover of MD Monthly, a health and fitness magazine. Especially since San Antonio is notoriously known for being one of the fattest cities in America, according to WalletHub. But anyway, more than a few Instagram users had much, much more to say about Nirenberg’s magazine cover. Just look at that caption. Who knew our mayor was such a hunk — excuse me, a “zaddy.”

For the uncultured folk, zaddy is slang “for a really ‘handsome’ guy who is very appealing and looks really fashionable. He has to have swag and sex appeal and look sexy and attractive,” according to pop culture bible Urban Dictionary.

The person behind @urbansanantonio isn’t alone. One user wrote “Our generation Henry Cisneros!! Dammmmnnn” while another commented “But what booty look like tho?”

The thirst is real, y’all.

Transgender Day of Remembrance to be Observed in SA on Nov. 16

San Antonio's LGBT community will come together to observe the Transgender Day of Remembrance on November 16 with events slated...