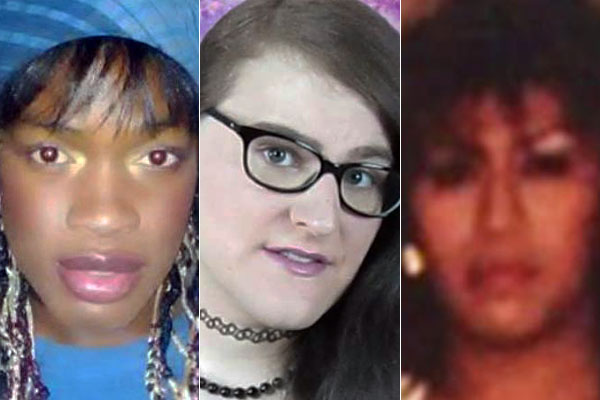 Among the 23 transgender people who have been victims of deadly violence in the U.S. in 2017 are Kenne McFadden of San Antonio, Gwynevere River Song of Waxahachie and Stephanie Montez of Corpus Christi. (Courtesy photos)

San Antonio’s LGBT community will come together to observe the Transgender Day of Remembrance on November 16 with events slated for downtown San Antonio.

The Transgender Day of Remembrance is observed in late November in recognition of the 1998 murder of Rita Hester, a highly-visible member of the transgender community in Boston where she worked on education around transgender issues.

According to GLAAD, victims of anti-transgender violence are overwhelmingly trans women of color. As of November 1, there have been 23 transgender people killed in the U.S. this year. With the exception of two, all have been people of color. These statistics do not include trans people whose deaths were not reported because of misgendering in police reports, news stories, and sometimes by the victim’s family.

Among those who have died this year are three trans people from Texas.

Kenne McFadden
Kene McFadden’s body was found on April 9 floating in the San Antonio River with no obvious signs of trauma. McFadden, who was 26, worked at a River Walk restaurant. In June, the police said a person of interest in the killing was already behind bars on different charges. The suspect was an acquaintance of McFadden’s. However, her case remains open and no charges have been officially filed. “[She] always kept us smiling and laughing,” a friend of McFadden’s told the San Antonio Current. “I’m not not sure exactly when she started identifying as a ‘she.’ I never asked questions because I don’t judge. I just wanted her to be happy.”

Gwynevere River Song
Gwynevere River Song, 26, became the 17th transgender person to be killed in this year after an argument led to the fatal shooting at the home of Song’s parents in Waxahachie on August 12. According to information from the Human Rights Campaign, Song was a 2015 graduate of the University of Texas at Austin who identified as femandrogyne and bisexual. In a post on Facebook, Song’s mother, Marcy Mosher, wrote, “Thank you all for attending my beautiful daughter’s memorial. I miss her beautiful soul every day . . . ”

Stephanie Montez
Stephanie Montez, 47, was found shot and killed at a home near Robstown on October 21. The Nueces County medical examiner said Montez had sustained gunshot wounds to the chest, abdomen and shoulder. On November 7, three people were arrested in connection with the murder. “She just had a great outlook on life. She was very supportive of everyone,” Brittany Ramirez, a friend of Montez told the Corpus Christi Caller-Times. “She was one of the sweetest people you’ll ever meet.”

In announcing the local Day of Remembrance events, SAGA organizers wrote on Facebook, “It is for [Kenne McFadden of San Antonio] and for the other twenty-two victims that we will come together, read their names and stories, and remind the world that they lived, and were unjustly killed. We cannot let these attacks, both legislative and literal, stop us from honoring their memory.”