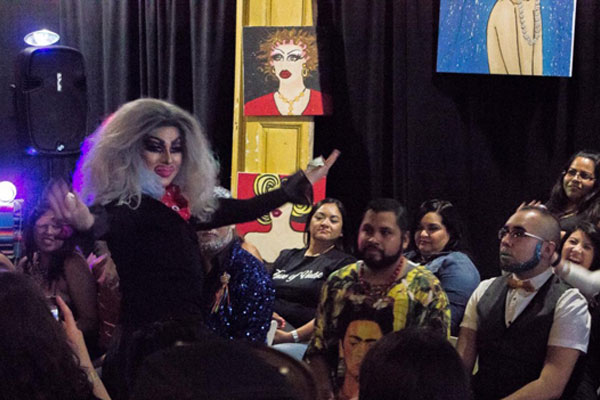 Visual artist Anthony “The Lemon” Diaz and fashion designer Caterina Gutierrez will both present new series of work on Saturday May 20 at Karolina’s Antiques.

Billed as MexiQueens II: Bigger and Browner the event “serves as an effort to unite the [email protected] and Gay communities as they continue to fight for representation and equality,” and follows up last year’s sold-out “Mexiqueens” art and fashion show.

The evening will be hosted by local drag star Tencha la Jeffa and will feature musical performances by Pink Leche as well as several drag performances.

“With the growing political tension surrounding both communities, the efforts to produce a sequel to the event aim to create a safe space for the LGBTQ+A and [email protected] communities as they come together through art, fashion, and eleganza,” Diaz said in a press release.

According to the release, “Caterina Gutierrez will debut a new collection of garments designed for Las Nuevas Latinas. With use of glitter and pop culture references, Gutierrez uses her artwork as a platform for political and cultural expression while highlighting the modern female form. Her new collection, Aqui Estamos, will glitterfy the ever transforming identity of our Modern Latina.”

State Senator Carlos Uresti of San Antonio was one of four Democrats who sided with Republican colleagues on the preliminary...