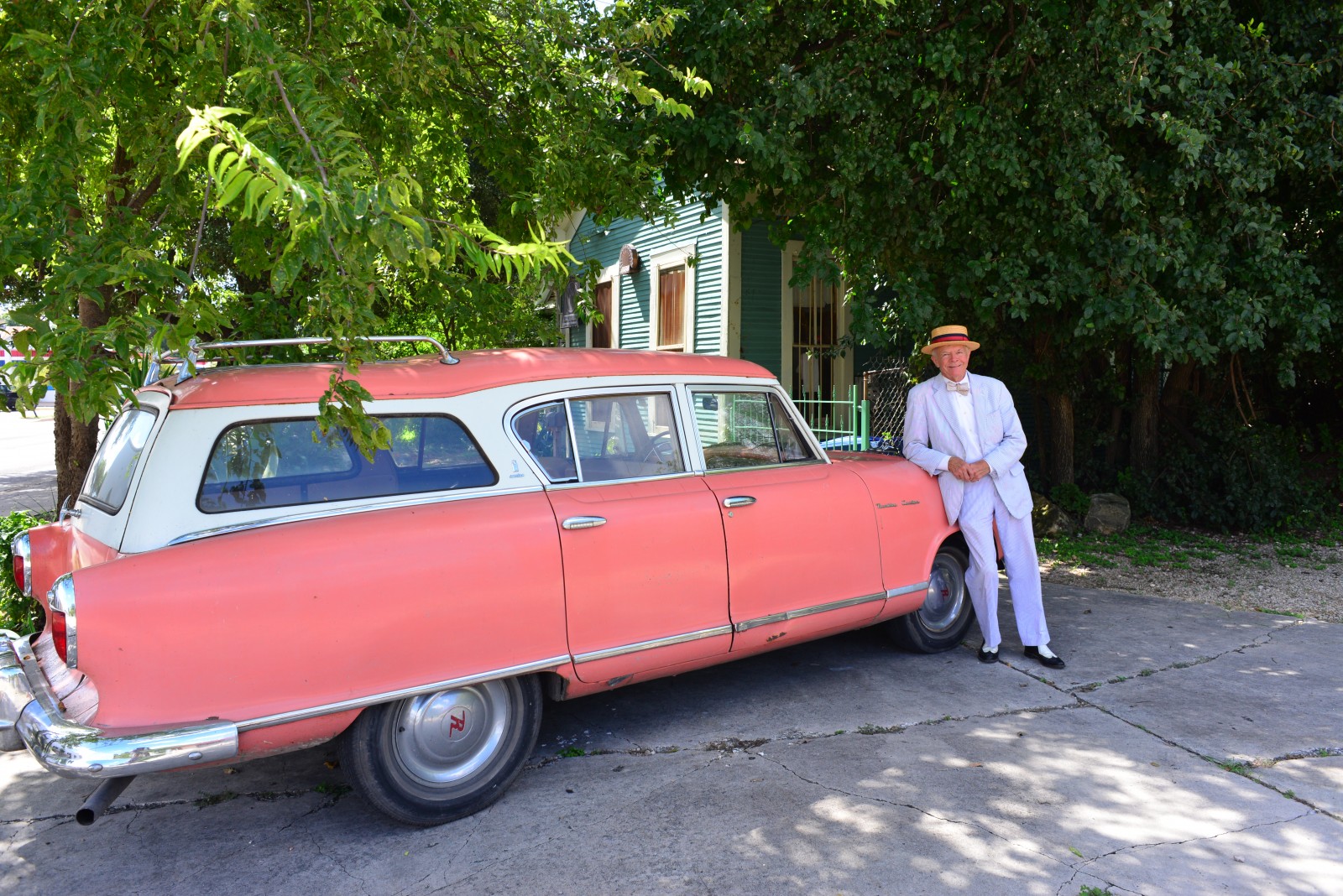 As of October 2014, Mike suddenly and unexpectedly found himself as co-owner of Isaac Maxwell Metal Studio, purveyor of custom punched-copper lighting fixtures. His partner is longtime Maxwell protégé Gregorio “Goyo” Rebollar. Maxwell himself passed away in 1998 at the age of 59, but his wife Judith — who managed the business from then until 2014 — is still with us.

Mike and I recently sat down for lunch at Liberty Bar (where else?) and what follows is essentially his tale about how all this came to be.

In the 1960s, architect Isaac Maxwell was designing homes, but he also had his metal business operating on the side. He would offer doors, kitchen cabinets, lighting fixtures and other “embellishments to his design,” as Mike says, for his custom-designed homes. The primary product were the punched-copper light fixtures, which cast unique light patterns in a room. An Isaac Maxwell fixture casting patterns across the studio

Originally, Maxwell and his collaborator, architect William McDonald, would draw and then punch out the designs on the copper itself. But that turned out to be a time-consuming and not necessarily productive method. Then they realized they could draw designs on paper, have it reproduced, tack it down on the copper, and punch out the patterns, using a hammer and scratch awl.

It soon became apparent to Maxwell that he needed help — he simply had too much going on. While working on his own living space, he met Goyo, a carpenter and woodworker helping with the project. Seeing Goyo’s potential, Maxwell asked him to work for his lighting business. Gregorio “Goyo” Rebollar at work on a torchiere

Goyo was a quick study, and capable of living up to Maxwell’s extremely high standards. They quickly built a professional — and familial — relationship. According to Mike, Isaac and Judith Maxwell essentially became patrónes of Goyo and his wife Leticia’s family. The Maxwells became a ubiquitous presence at Rebollar birthdays, weddings and other family events. In fact, Goyo’s youngest daughter is named after Judith, and one of his grandsons is named after Isaac.

As the business continued to grow, Goyo brought in family members to fill the need. At one point, five additional relatives were working with him.

Following Isaac Maxwell’s death, Judith soldiered on, running the business with Goyo in charge of the artisanal side. Previously, both Judith and Goyo had learned how to create designs. Along with Maxwell’s original designs, which still exist, they have managed to create an impressive body of work.

Since Goyo speaks scant English and Judith speaks no Spanish, their close friend Mike Casey was brought in to translate. Soon enough, Mike became a part of Goyo’s extended family.

Gradually, Goyo’s relatives mostly moved back to Mexico, and he found himself working solo. Looking to the future, both Isaac and Judith hoped the business would ultimately go to Goyo, but there were linguistic and business barriers. To make matters worse, it turned out the business was losing money — Judith was putting more in than she was getting out, to the chagrin of her financial advisor. The shop was under threat of foreclosure.

One day, around this time, Mike was driving in Maude, his distinctive 1950s-era Rambler, by the Maxwell Studio, then located at 1109 South Alamo Street in the heart of King William. He saw an unfamiliar car in the driveway. Curious as to what was going on, he went inside only to find a Maxwell family acquaintance breaking the news to Goyo that the studio would be closing down.

Fortunately, Mike had actually been working on an order for 10 fixtures, the design of which had just been finalized. He managed to convince everyone they had an order and could make payroll. He also had another order in the works, despite not yet even being directly involved in the business.

According to Mike, Judith said to him, “Okay, if you want to take over, then you can take over the shop.” Mike subsequently asked Goyo if he thought it was doable. The answer was a big abrazo and a heartfelt “¡Si!” But they had to move quickly because Judith’s financial advisor was feeling compelled to sell the building. The timing couldn’t have been more fortuitous. As it happened, one of Mike’s tenants in “The Compound,” an artists’ colony of six homes he owns at the corner of South St. Mary’s and Steiren, was planning to move out. Perfect timing. The new space at 1135 South St. Mary’s — which was once a boat repair shop — actually turned out to be more comfortable for Goyo to work in.

Slowly but surely, Mike and Goyo have rebuilt the business. For the first year, copper artist José Chapa was brought on board to help with his expertise and management. “I’m not an entrepreneur, I’m not a marketer … but I’m learning,” Mike says.

At this point, they have had several recent installations, including 10 fixtures in the newly remodeled lower level of The Esquire Tavern, and another 10 at Chisme, the Mexican restaurant Chad Carey opened in the old Teka Molino on North St. Mary’s. In an effort to broaden awareness of their studio, they hosted a booth at the Texas AIA Convention in November. More recently, an agreement has been reached with Stone Standard at the Roosevelt Library to become the dealer for Isaac Maxwell fixtures.

Fortunately, all of the original templates exist and can be reproduced. Goyo also has the capability to create new designs upon request. The future seems promising for this newly resurrected and unique business.