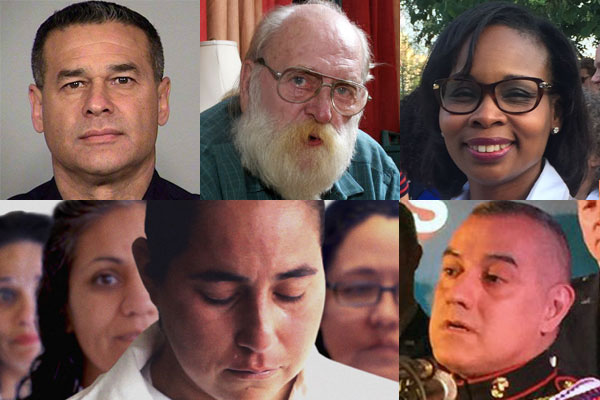 1. The Killing of SAPD Officer Benjamin Marconi
The death of Officer Benjamin Marconi, who was shot in his patrol car in broad daylight outside police headquarters on November 20, stunned the citizens of San Antonio and the nation. Officer Marconi had scores of close friends in the LGBT community and supported the cause of equality. His killer, Otis Tyrone McKane, was captured less than 48 hours after the shooting. Thousands attended Marconi’s funeral including law enforcement officers from across the U.S.

2. The Death of Robert “Papa Bear” Edwards
Robert “Papa Bear” Edwards, founder of the San Antonio AIDS Foundation, died of natural causes on November 10. It was in 1986, at the beginning of the AIDS epidemic in San Antonio, a time when it seemed no one wanted to treat the infected, that Edwards started SAAF to care for the scores of gay men who were sick and dying. Edwards retired from SAAF in 1991, never having taken a salary for his work. In 2010, the San Antonio chapter of the Human Rights Campaign honored him with the Chuck Jordan Award for lifetime advocacy.

3. The San Antonio Four Exonerated
Four San Antonio lesbians, who were imprisoned in the late 1990’s  for sexually assaulting two girls, were found innocent and exonerated by the the Texas Court of Criminal Appeals on November 23. Anna Vasquez, Cassandra Rivera, Liz Ramirez and Kristie Mayhugh all were sentenced to long prison terms. In 2012, one of the victims publicly recanted her allegations about the four women. “Those defendants have won the right to proclaim to the citizens of Texas that they did not commit a crime. That they are innocent. That they deserve to be exonerated. These women have carried that burden. They are innocent. They are exonerated. This court grants them the relief they seek,” the Court of Appeals concluded.

4. Mayor Ivy Taylor Booed at Vigil for Orlando Victims
San Antonio Mayor Ivy R. Taylor was jeered by protestors while she gave the opening prayer at a June 16 vigil in Crockett Park for the 49 victims of the Orlando shootings. The screams of “Shame on you Ivy” and “You’re part of the hurt Ivy” as well as other insults drowned out the mayor’s prayer during what was an otherwise peaceful and moving vigil commemorating those who died at the Pulse nightclub. The mayor’s prayer was thoughtful and compassionate but it did not specifically mention the LGBT community.

5. Dignity SA Marks 40th Anniversary
During the month of August, Dignity San Antonio observed its 40th anniversary of providing a safe space for LGBT Catholics to reconcile, heal and integrate their sexuality with their spirituality. Dignity’s story is one of a congregation in exile. In its four-decade history, the group has worshiped in several Catholic churches only to be asked later to leave because of the church leadership’s conflict with the group’s sexual orientation and gender identity. Undeterred by rejection, Dignity SA has worshipped in meeting halls, the homes of members and in the sanctuaries of Protestant churches.

6. SAAF Closes Nursing and Hospice Care Unit
Thirty years after it began providing medical care to those who were sick and dying of AIDS, the San Antonio AIDS Foundation announced on December 9 that it will close its nursing and hospice care unit. In a statement, Cynthia Nelson, SAAF’s CEO, said that “keeping the nursing unit operational 24 hours a day, seven days a week, while having very few patients, was expending precious staff and financial resources that could be redirected to the current community need . . . Change is inevitable, and while closing the special care unit is a tough decision and a break from the past, it is the right thing to do.”

7. Alamo Colleges Adds Gender Identity and Expression to Nondiscrimination Policy
The board of trustees of the Alamo Colleges unanimously voted to amend its nondiscrimination policy to include gender identity and expression on February 23. The vote brought to a close a controversy that started in June 2010 when the trustees voted to add sexual orientation, but not gender identity and expression to the policy, leaving the LGBT community and student activists angry and disappointed by the omission.

9. San Antonians Report Post-Election Hate Speech
San Antonio has not been immune to bigoted attacks that have been reported around the nation following Donald Trump’s presidential win. Two local residents, H. Drew Galloway and his partner Martin, said the hardest thing about finding a homophobic slur scrawled on the side of their car was explaining it to their sons.

10. Eric Alva Inducted into ‘Hall of Heroes’
Retired Marine Sergeant Eric Alva from San Antonio was inducted into the OutServe-SLDN Hall of Heroes on May 21. The awards are given annually to individuals “who have made significant and lasting change in the LGBT military movement.” In March 2003, Alva was the first soldier injured in the Iraq War when he stepped on a land mine resulting in the loss of his right leg and part of an index finger. He became an advocate calling for an end to the US military’s Don’t Ask, Don’t Tell policy — testifying before Congress and speaking at engagements around the country. When Don’t Ask, Don’t Tell was repealed in 2010, Alva stood on the dais next to President Barack Obama as he signed the order to end it. Choco Gonzalez Meza
Choco Gonzalez Meza, who was a tireless activist for the Democratic Party and the lead of the Hillary Clinton presidential campaign in San Antonio, died on October 9. Meza was a dedicated organizer for women, Latinos and an ally to the LGBT community. In November, the San Antonio chapter of the Human Rights Campaign honored Meza posthumously with the Chuck Jordan Award for lifetime achievement. Father Eddie Bernal
Father Eddie Bernal, a Catholic priest who, despite being chastised by his superiors, stood up for LGBT rights, died on May 29. For over 20 years, Bernal presided over masses for Dignity San Antonio, an organization for LGBT Catholics. “We need to provide good preaching and good teaching to [the LGBT] community,” he told the San Antonio Express-News in 2010. “I have met some of the most wonderful people in my life in Dignity. They’ve changed my life for the better. And I’ve learned so much.”