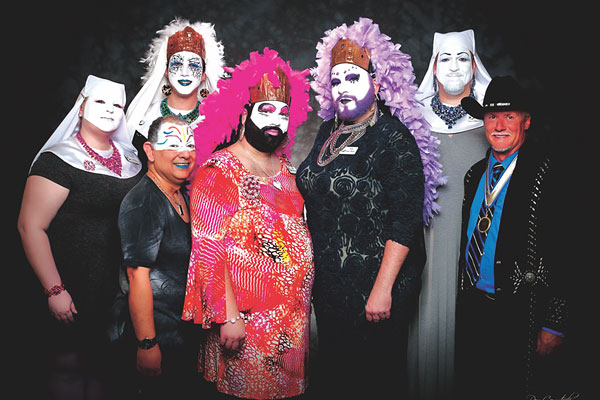 Dolled up in flamboyant habits, caked in makeup, topped with crowns and often equipped with parasols, the benevolent Sisters proudly employ “humor and irreverent wit to expose the forces of bigotry, complacency and guilt that chain the human spirit.”

Launched in 2016, the organization’s Mister Sister Leather competition invites leather daddies to strut their stuff and be judged by a panel in the categories of closed-door personal interview, bar wear, leather formal wear, jock wear, and Q&A. After inheriting the title from Cat Artemis, Mister Sister Leather 2017, this year’s winner will go on to compete in Mr. Third Coast Leather and make “a minimum of five public appearances as MSLSA at gay male fetish events within San Antonio and surrounding areas throughout Texas.”

Emceed by Dallas-based Sister Lawana Jocqui and Lipps La Rue, the event also includes handcrafted leather goods for purchase from House of MarKus and Mooing Penguin Studios, entertainment by local performers, and the presentation of funds raised in 2017 for Thrive Youth Center and Project HOT.

When the Metropolitan Community Church of San Antonio holds its Love's Day Masquerade Ball on February 3, it will be...